Babri Masjid anniversary: ‘There was never an iota of communal hatred in Ayodhya’

25 years after the demolition of the Babri Masjid, citizens of Ayodhya talk about their age-old heritage of cultural collaboration, writes SAURABH KATKURWAR 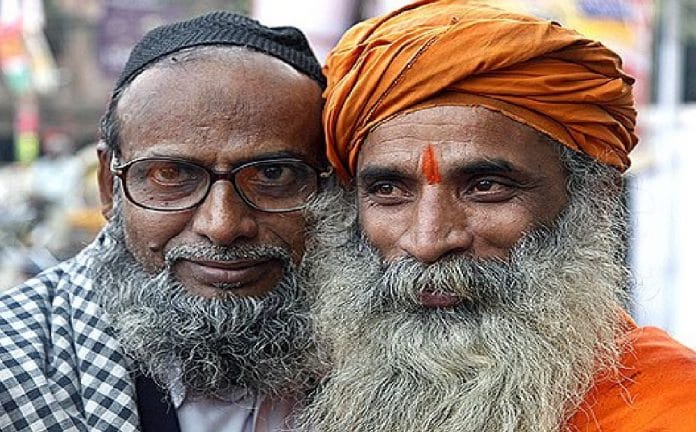 Ayodhya is a town held sacred for its association with Hindu religious lore, which in latter days acquired the unflattering reputation of being a hotbed of Hindu-Muslim antagonism and religio-political conflict whose reverberations are felt both nationally and internationally.
But what may be difficult to believe, is that Ayodhya has traditionally been known for its inter-faith harmony where it is not out of the ordinary for a Muslim tailor to stitch clothes for the idol of Ram or for a Hindu priest to help renovate an old mosque.
25 years after the demolition of the 16th century Babri Masjid on 6 December, citizens of Ayodhya take pains to talk about their age-old heritage of cultural collaboration and free participation in inter-religious activities which has kept the secular fabric of the town intact – despite the dragging temple-mosque politico-legal dispute over 2.7 acres of prime land whose ownership is contested by both Hindus and Muslims.
Locals, both Hindus and Muslims, say it was “outsiders” who came to Ayodhya in 1992 and stirred trouble while locals were busy saving each other – irrespective of their religious faiths – from the brunt of the riots that ensued. Out of the town’s total population of around 60,000, Muslims account for only six per cent. But they never felt any discrimination from Hindus, says Mohammed Chand Qaziana, priest at the Dargah of Sayyed Mohammad Ibrahim.
Qaziana said that the dargah was protected by local Hindus when the kar sevaks, or Hindu religious activists who came from outside the town, demolished the Babri mosque on 6 December 1992, on grounds that it was erected there by invading Mughal emperor Babar after razing a temple dedicated to Ram.
“This 900-year-old dargah has followers from the Hindu community as well, many of who regularly pay a visit here. It is a symbol of our centuries-old harmonious existence. When it was attacked, our Hindu brothers formed a human shield around it and saved it,” Qaziana recalled.

What makes communal harmony special here is the participation in inter-faith events and rituals – Muslims stitching clothes for Hindu deities, participating in Ramleela (religious theatre based on the life of Ram) or doing namaz (prayers) in Hindu religious places; and Hindus similarly contributing to mosque renovation or helping Muslim fellow townspeople in times of need.
Echoing Qaziana’s views, Barfi Maharaj, who identifies himself as a Hindu social worker, said the Masjid was razed on December 6 by Vishwa Hindu Parishad (VHP) hotheads and locals had no role in it.
“We were neither influenced by hate speeches nor did we participate in the demolition. How can people from the birthplace of Ram, who is known for his secular teachings, commit such a sinful act?” asked Barfi Maharaj.
Sadik Ali, alias Babu Khan, said he had stitched seven to eight sets of clothes for the Hindu gods so far. Sadik, who is said to be a stakeholder in the negotiations in the issue, called Babri Masjid demolition “unfortunate” but said he had no problem in the construction of Ram Mandir on the disputed land.
“We do have faith in Ram. We had offered namaz at Hanuman Gadhi. If Hindus want big temples for their beloved god, we do not have a problem. We just want a piece of land nearby for a mosque,” Ali said.
Mohammed Salim’s family has been making ‘khadav’ (wooden sandal) for generations, which were traditionally used by sadhus and priests but are now largely used in temples.
“I have never witnessed any tension between the two communities here. We depend on each other for our needs and we respect each other,” he said.

A local contractor, Shailendra Pandey, said the people of Ayodhya were hardly consulted on what has come to be known as the Mandir-Masjid issue and politicians used Ram and the temple issue for their personal gains.
“You go anywhere in the city and talk to anyone. You will not find an iota of communal hatred among them. The unholy politics by outsiders has given our city a negative image,” Pandey said.
Mohammed Naeem, who is the president of Naugaja Dargah, said politicians were now creating hurdles in the way of the temple construction.
“This town is a perfect example of religious harmony and secularism, thanks to its rich culture and history. Everyone would be happy if the contentious issue is resolved amicably. However, we feel the politicians have kept this issue pending for their selfish motives,” Naeem said.