When the Opera House brought out its Diwali sari 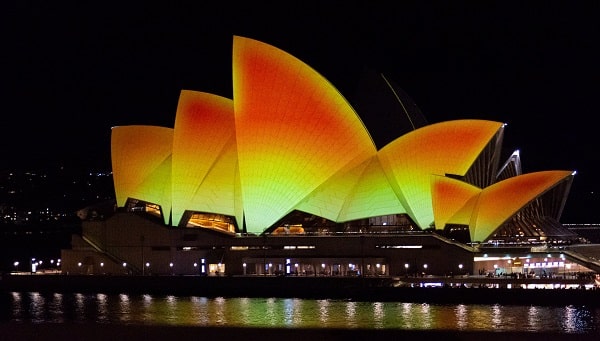 The Sydney Opera House likes to frock up for special occasions, picking distinct colours as it shows solidarity with various communities and causes. For this event, it brought out its orange and gold Diwali sari.

Standing on the threshold of the city, it shone its light bright and beautiful, as if to welcome Goddess Lakshmi in. Goodness and good fortune for the city of Sydney, clarity of thought, and the removal of negativity. Om maha lakshmyai namah.

For the Indian community gathered to watch this Diwali announcement just as the sun goes down, it is always a soul-stirring sight – not just for its Diwali connotations but also as a gesture of acceptance by our adopted homeland.

NSW Premier Gladys Berejiklian pressed the switch on from across the harbour on the terrace of the Museum of Contemporary Art, at a special event hosted by Multicultural NSW.

“We are incredibly proud of our Indian community for your contributions to the state of NSW,” Ms Berejiklian said as she stood surrounded by her ministers. “We support you as you preserve your traditions and pass them on your next generations.”

Manish Gupta, Consul General of India (Sydney) replied to the Premier, “Events such as this show the importance you attach to connecting with the communities that make up your society. Sydney is a wonderful nurturing ground for diversity.”

Invited guests also got to hear Shabad (Sikh prayers) sung by priests from the Sikh community, who also observe the Diwali tradition.

Earlier, an Annakut display designed by the BAPS Swaminarayan community had greeted visitors to the venue. An elaborate arrangement of food items, Annakut is a ritual of gratitude performed during Diwali to offer thanks for the comforts in our lives.

It has been a regular occurrence at this event.

Missing this time, however, was another regular ceremony, the annual felicitating of community seniors. Instead we had the felicitation of two other communities as they prepared for their own special events: the BAPS Swaminarayan movement as they marked the 200th anniversary of their scripture the Vachanamrit, and the Sikh community as they prepare for the upcoming 550th birth anniversary of their spiritual leader Guru Nanak Dev.

Our favourite city monument has been celebrating Diwali since 2014 just ahead of Indian Prime Minister Narendra Modi’s memorable visit.

It is but one of many world monuments that have begun to be illuminated for Diwali. The Empire State Building, the Burj Khalifa and the Eiffel Tower have all worn Diwali colours. Closer home to us in New Zealand, this year for the first time, Auckland Museum, the Sky Tower and Viaduct Harbour also joined in to wish the world a Happy Diwali.