It was hard not to get sucked in, says JYOTSNA SHARMA, a Garba debutante 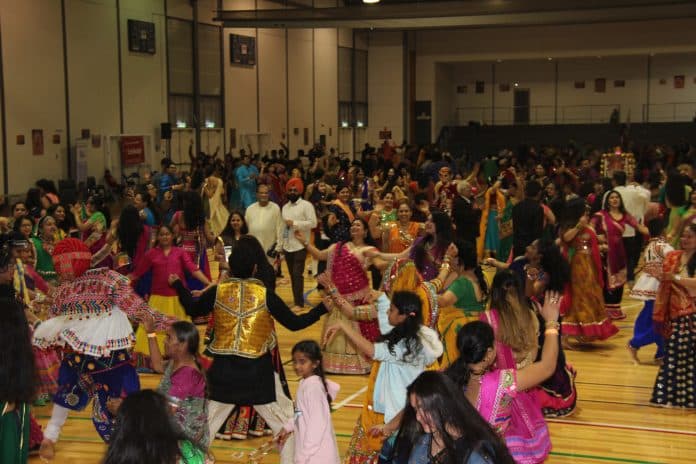 It was a sight to behold. More than a thousand people, decked out in dazzling finery, dancing almost in sync. Welcome to the Garbas, a large scale community dance ritual during this auspicious time of Navratri (Festival of the Nine Nights).

At a recent Sydney event organised by the Gujarati Brahman Samaj of NSW Incorporated, some 2,400 people attended a fabulous Garba night at the Blacktown Leisure Centre in Stanhope Gardens. Skirts twirled as dancers whirled – in large circles on the dance floor, their gentle swaying motion drawing others in to join.

For newbies like yours truly, it was hard not to get sucked in, as we watched fellow dancers and picked up the steps. With some very traditional Gujarati music – and sumptuous food – the enthusiasm was palpable, and yes, the dancing was contagious. It was a family evening for most and the little ones kept up with the adults admirably, even forming their own little cliques!

A big chunk of credit for the success of the evening goes to the talented and tireless musicians who kept the crowd moving for hours. Singer Gautami Bhatt told Indian Link, “When I first arrived in Sydney in 1992, there were very few Gujaratis here, and even then we’d get together and find a way to do Garba during Navratri.”

She emphasised the importance of celebrating your roots, especially since the community has grown exponentially over the years. “Yet I do think it’s a great platform to unite many different communities, including Australians, in the most inclusive way possible. For me personally and as an artiste, Garba makes me feel closer to the goddess and I draw strength from it all.”

Another singer Rajal Shukla, performing since 2003, chimed in, “I consider this an opportunity to do some good for the community, as the Gujarati Brahman Samaj donates all funds raised to charity. Of course it also helps to keep our traditions alive and pass them on to the next generation.”

Young keyboardist Vishal Lakhiya was all ardour and passion for the evening. “I enjoy the opportunity to make the Garbas relevant.”

Singer Bhagirathi Bhatt has been performing in professional capacity since 2010, not just in Sydney but in the UK as well. “Music has been a passion since I was a child, but being Gujarati, singing Garba gives me unparalleled satisfaction!”

She and her team were all supported ably on stage by singers Atul Kumar and Pinkal Pandya, percussionist Ketan Parmar and Dhol players Bobby Dave and Anand Konnur.

Each year the Gujarati Brahman Samaj donates all proceeds to some charity and the recipient of this year’s donation is the Dada Bhagwan Foundation (DBF): a spiritual non-profit organisation formed with the goal of spreading peace, harmony and ultimate bliss to the world through the science of Akram Vignan or the path to self-realisation.

In this festival dedicated to the Goddess Durga, in which her nine avatars are worshipped, it is the feminine principle of nature that is invoked. The term Garba can be traced to the word Garbha Deep, Sanskrit for ‘womb’ and ‘light’. Garba was traditionally performed around a big Garbha Deep, representing life just as a foetus in the mother’s womb. The dance worships the power and divinity of goddess Durga or Amba.

The Garba evening turned out to be an effective way for the community to bond, spread love, laughter and celebration. It was absolutely enchanting to witness a venue, on the other end of the planet, transform into a mini-festive Gujarat.