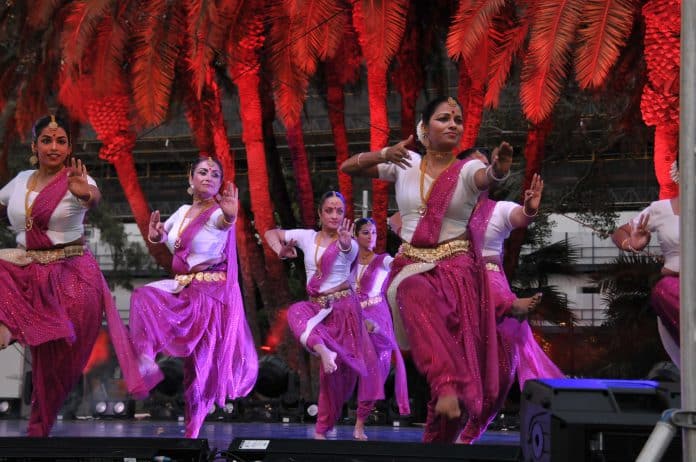 The 11th Swan Festival of Lights 2018 was held in Perth recently at the Supreme Court Gardens adjacent to the Swan River. It was an outdoor multicultural festival hosted by the Saraswati Mahavidhyala and Annalakshmi Cultural Centre. As a Diwali celebration, it was a free, family-friendly, smoke-free and alcohol-free event.
The focus this year was on the southern state of Tamil Nadu. Dance and performances by several groups showcasing the different cultural aspects were the highlights. A virtual tour of Tamil Nadu was possible by watching and participating in several events.

A huge colourful balloon displayed at the entry point welcomed all to the Swan Festival. Inside, a special counter called the Tamil Nadu Express gave out info about the state. An interesting feature was the opportunity to try traditional Tamilian attire – the sarees and dhotis had many happy takers! So did the ghee lamp offerings and the henna tattoos as expected.
The littlies were drawn to the special enclosure filled with rides and other attractions. The laughing clown stall and the doll house with colourful towers and gates were particularly popular.

Saraswati Mahavidhyala (SMV) had put together an interesting program of several dance and music performances. The focus was mainly on folk and traditional dances and instrumental music. Folk dances included those from Tamil Nadu like karagattam, poikal kudhirai etc. Karagattam is a Tamil folk dance involving the balancing of clay or metal pots or other objects on the dancer’s head. Poikal kudhirai is a dance performed using a horse prop worn around the dancer’s body. The widen leg ties to the dancers allowed them to tap their feet to make the sound of hooves.

After enjoying all these events, it was time to taste the different types of food and drink provided by Anna Lakshmi. Several lip smacking items were available. A dosa hut, sweets & savoury snacks, a poori cart and other delights plus the beverages ensured the crowds were well fed and happy.
At nightfall, a fantastic display of fireworks gave a fitting finale to the event.
According to Arun Krishnan, one of the key members of the organising team, feedback from the public has been ,positive overall. Some did feel that the event was not as “glamorous” as in the past. He said “Some patrons have noticed the financial stringency we have been operating under and hence its impact on the usual glamorous way we used to offer our events to the patrons in the past.” Having said that, some were “highly complementary of our sharing the stage with the Pakistani qawwali singers as well as our collaboration with the Confluence Festival”. Mr. Krishnan also highlighted the success of the festival in bringing families together, as well as bringing cultures together in a celebration of art, music and dance in a safe and beautiful environment.