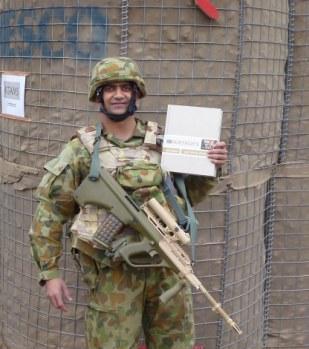 Pack small, pack light, take only what you need, know where everything is so that you can reach for it in the dark, repack everything. As Captain Dr Sandeep Bhagat was crossing off the list of things he needed to take to his deployment in Afghanistan, the mundane was being mulled over with some real concerns. Is it safe? Will the family manage? Who will take care of them? What if…?

All of these were very valid questions for a 37-year-old happily married father of two children who chose to join the Australian Army, and was off to do a stint in the war zone. As a qualified medical practitioner and palliative care specialist, Capt Bhagat was required to treat military personnel, civilians and Afghans in Tarin Kowt for two months, followed by a four month stint recently in the UAE and Kabul.

It may be difficult for many to understand, but Capt Bhagat was glad to go there. Experiences like these were the reason he joined the Army Reserve.

“My deployments gave me an enormous sense of adventure and a great opportunity to work with people from all walks of life,” said Capt Bhagat as he explained the reasons behind his readiness to work in this potentially hazardous environment. “I have always had a penchant for uniforms, it could be the influence of my grandfather who served in the Indian Army in World War II, or my relatives who chose the army as a profession”.

Being a Punjabi son, his inspiration comes from the Sikh Gurus, especially determination and the sense of sacrifice for others.

“It could also be due to the training I received as a cadet, in the prestigious Sainik School in Kapurthala, Punjab. I have always wanted to serve the nation. I migrated to Australia 12 years ago and went through the initial settling-in period, but I always knew I would end up in this uniform that is my pride and joy. It is my privilege to be able to the serve my adopted country both as a practicing doctor and as an Army Captain,” added Capt Bhagat with conviction.

“Like so many hard working Indians in Australia, our deeds bring respect to our motherland as well as the country we call our home now,” he stated.

As I spoke to Capt Bhagat in the comfort of his lounge, he came across as an everyday family man who likes to play cricket with his two sons. As his story unfolded I saw the grit and determination that earned him the name ‘Rocket-Pocket’ from his army mates.

“Most of the men I work with are bigger and taller than me,” he said disarmingly, adding, “I am not in the least bit daunted by this, though! I have a very strong physical fitness regime that holds me in good stead along with a seriously competitive streak that I developed during my days in Sainik School. I tend to be the first to clear most of the obstacle courses designed to test us, hence the nickname”.

Capt Bhagat, who has just returned from the Middle East Area of Operation of the Australian Defence Force (ADF), hails from the state of Punjab in India. He was born in Jalandhar and went to a boarding school in Kapurthala at the age of 10, going through strict military regimental schooling for the next 7 years. After his schooling he completed his MBBS from Government Medical College in Amritsar, and within five months of acquiring his medical degree, Capt Bhagat left India to live in Hamilton, New Zealand where his bride Harvinder (Rosy) had family connections. The young doctor was keen on doing medical research and Melbourne appealed to him as a place that offered more potential in the medical field as well as a multicultural environment.

Capt Bhagat completed his GP training and got his first break as an advanced academic registrar at Monash University, a prestigious funded position towards medical academics and research. He started his own practice in Drouin in West Gippsland. But as he always had a passion for caring for the frail and elderly, Capt Bhagat left general practice to undertake specialist physician training in palliative care.

“The more you do palliative care, the more you love it. It is a very noble and humbling experience. I got interested in palliative care after a visit to an aged care centre as a GP. There I met a 94-year-old man from Britain whose inspiring story changed my mindset,” he continued.

“This retired Major who had served in the British Army at Amritsar reminded me of my grandfather. The genuine wishes and blessings that you get from the people who are affected and their families are things that money can never buy,” shared Capt Bhagat who is currently working as a Consultant in Palliative Medicine-Eastern Health and as a Sessional Primary Care Consultant in Dandenong Hospital ED.

Talking about his recent deployment in Afghanistan, Capt Bhagat claimed that bullets and bombs don’t discriminate.

“As a combat doctor, our skills are required to cure a common cold or simple ailment, to serious blast injuries. IEDs or home-made destructive devices cause injuries to everyone, including their own people. It is horrific to see the destruction especially when it affects local children and women,” said Capt Bhagat as he shared his personal encounters during his time in Tarin Kowt previously, and in the Middle East and Kabul recently.

Describing his soujourn in Afghanistan Capt Bhagat said, “I will not go into specifics however in Afghanistan a typical day for us was very. Work days began at 0530 with morning PT, and we would finish not before 2300. As a doctor my day was filled with common general practice type issues, along with treating war injuries involving locals and coalition soldiers. We mainly stayed in the camp but we had opportunities to go out as well. Afghani workers on the base were very respectful especially when they learned I could communicate in Urdu. They have a special regard for Punjabis and Sikhs. My leisure hours were filled with exercise and more exercise, or chatting with my team mates.  I spoke to my family once a week, sometimes more”.

And what was his most memorable experience?

“There were lots of experiences that I cannot elaborate on, however the most memorable ones were when I could serve our hard working diggers”.

A question that he is often asked is, was he ever scared for his life?

He added after a thoughtful pause, “I do understand the dangers, though”.

Capt Bhagat has served on the board of many medical and educational bodies and advisory committees. Despite all his commitments, he is also involved in improving the care of patients dying with advanced cancers in India, as a member of Australasia Palliative Link (APLI)’s Hamrahi Project. As part of their commitment to the cause, participating doctors provide free mentorship to Indian doctors caring for patients with advance cancers and illnesses in India. They also host visiting doctors from India to gain experience in managing pain management of advanced cancers.

When asked how he gets the time and energy to be involved with defence, medicine, altruism and still find time for family, Capt Bhagat shrugs philosophically. “I believe in the ancient adage: ‘Do all the good you can, by all the means you can, in all the ways you can, in all the places you can, at all the times you can, to everyone you can’. As a doctor I am fortunate enough to be able to offer comfort, and as a defence personnel I am brave enough to stand against challenge and controversy. These to me are the ultimate measure of a man in uniform, and that is why if I am offered another opportunity to serve in Afghanistan the answer will be ‘yes’ all over again,” he says confidently.