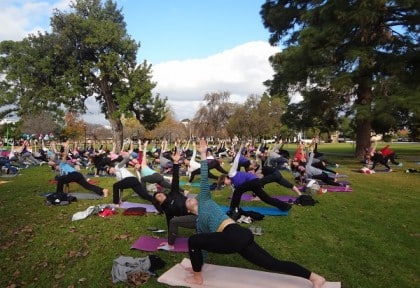 Adelaide gets yogafied on the International Day of Yoga Day

It was winter solstice on 21 June, the shortest day of the month. But there was no shortage of interest among some fifty or so yoga enthusiasts to brave the evening cold and front up at the Adelaide City Council in the heart of the city to participate in the International Day of Yoga that has now gained international acceptance and world-wide participation.
The event was organised by the Indian Cultural Centre, Consulate General of India in Sydney, in association with Incredible India, City of Adelaide, Indian Australian Association of SA, Divya Jyothi Jagrati Sansthan, Art of Living and Brahma Kumaris’ Adelaide Chapter.
The Council’s colourful Banquet Room that often becomes the scene for local glitterati to rub shoulders, witnessed that evening much more nimble and intricate movements of limbs and other parts of human torso. On display were the various asanas our ancient sages have passed on over the centuries for our physical and mental wellbeing.

The hour and a half program started at 5.30 to enable people working in the city to join the meditative session on finishing their mundane work.  The banquet hall provided a beautiful backdrop. The participants included both men and women and a couple of youngsters under ten.
As Vivek Kulkarni of Art of Living, along with Raj Pandit of Raj Traditional Yoga School explained each asana in progressive steps, the participants executed them to a tee in unison providing an enchanting spectacle. There was also a large screen, showing at the same time, pre-recorded version of the asanas performed by professional exponents. The program was co-ordinated by Gagan Sharma, vice-president of the Indian Australian Association of South Australia (IAASA).
The evening session was inaugurated by Adelaide’s Lord Mayor Martin Haese. The City Council has been providing good support to some of the Indian community’s activities including the celebration of the 50th anniversary of IAASA last month, besides the Association’s annual open air showpiece ‘Mela’ which moved undercover at the Royal Showgrounds a couple of years ago.
LP Ayer

Three days earlier, on the Sunday afternoon, the Australian School of Meditation and Yoga (ASMY) held a mega outdoor session in upmarket North Adelaide’s Wellington Square, a pristine park surrounded by million dollar mansions. Some hundred and twenty people assembled there were all non-Indians, predominantly women.  The two-hour program on this occasion started with a recital of gauranga kirtans as is the norm with ASMY that conducts regular free meditation and kirtan sessions. Then three of their regular yoga instructors performed a number of asanas on a stage for the assembled participants to replicate.

They couldn’t have chosen a better day. With temperature hovering around 18 degrees and plenty of sunshine, it seemed more like spring than winter. With over a hundred persons presenting both simple and complex yoga routines in a picturesque public park dotted with colourful yoga mats, it was simply spectacular and superbly spiritual.
LP Ayer

It was a rather special Yoga Day in Adelaide this year. In a unique event, 12 yoga practitioners – including yours truly – welcomed the sun with Sun Salutations (Surya Namaskar) on the roof of the Adelaide Oval.
The Hindu Council of Australia collaborated with Commonwealth Bank Roof Climb in hosting this matchless experience.

We arrived at Adelaide Oval at 6.00am, braving the 8 degree cold and thinking this was going to be tough. But we knew we were going to be part of something incredible.
The team from RoofClimb equipped us and at 7 am I took charge of the group as yoga teacher. It took us 15 minutes to reach the summit, which was good warm-up for us to perform our yoga asanas. As we beheld the first rays of the sun at 7.35am, we could not but admire the magnificence of Mother Nature.
We watched in wonder as the sun lit up our city in a magical glow – the Adelaide Hills on one side and the coast on the other.

We meditated on this stunning view for five minutes, and prayed to the Sun God to enlighten the world with peace and harmony.
We then performed the Surya Namaskara, or Sun Salutation.
The Sun Salutation is a powerful sequence of 10-12 poses specifically designed to work out all parts of the body. It is a great way to warm the body at the beginning of a yoga session. Even if you do not intend to practice yoga, the Sun Salutation is a great way to start the day, as it also works on the mind. By hearing the breath and holding the gaze (drishti), these movements allow us to centre ourselves and to quiet our wandering mind.

As the yoga climbers descended from the rooftop, all agreed that the experience was out of this world. Performing the yoga routine, and the few moments of meditation while looking at the beautiful sunrise, was simply mesmerizing.
We finished our practice with a peace mantra, led by our teammate Snehal Thakar.
Little did we know then that this beautiful experience would make the news in the big way that it did. Channel 9 News Adelaide telecasted the event on the same day at 6 pm. Soon it became news all around Australia and even India.
Vani Shukla

The Hindu Council of Australia arranged a free community yoga and meditation session at the Ganesha Temple.
Different schools of yoga and experienced teachers shared their philosophy and teachings. These included Tina Shettigara (Director Yoga Spirit), Monique (Director Synergy Yoga), Sunila Vig, Rajendra Pandey and Gangadhara. We got lucky enough to have B. Vanlalvawna, Consul General of India, marking the event with us.
Being the host of the program, I couldn’t help but notice that the remarkable energy of the approximately 50 people in the hall.
After the session, everyone took blessings from the deities of the temple. The program concluded with prasad (sanctified food).
Yoga is a wonderful method to achieve holistic health and complete well-being. As the Bhagavad Gita says, yoga is the journey of the self, through the self, to the self.
Vani Shuklac