Owning the crease in pink saris at Sydney Cricket Ground

The Pink Sari Project sent their message out – and some stunning visuals – at Sydney’s Pink Test. 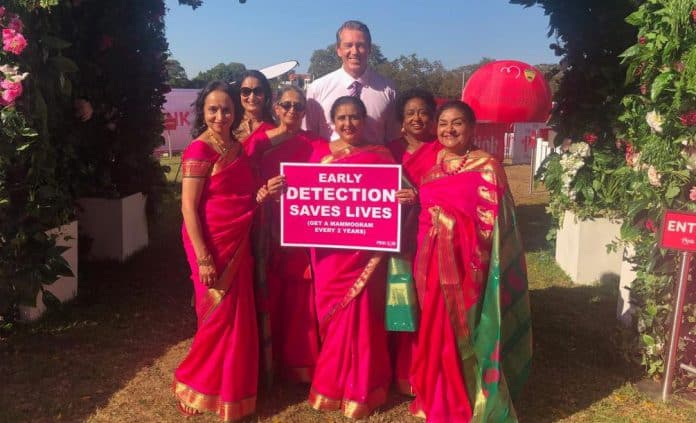 Saturday 5 January was a suffocatingly hot day in the emerald city, but despite the mercury creeping up to almost 40°, die hard ‘crickets’ swarmed the SCG for a piece of action as India and Australia battled out the final test match of the 2018-19 series.

The tensions were high and the heat would have been insufferable had a wave of pink not washed over to provide refreshing relief. The 120 ladies donning pink saris to promote the Pink Sari Inc’s message of early detection of breast cancer were a sight to behold on the third day of the match. It is hardly surprising then that they proved to be the biggest highlight of the game that day. The colourful saris, music and dances created an atmosphere that drew everyone in and made the day memorable.

Indian Link sought out Shanta Viswanathan, a voluntary committee member of Pink Sari Incorporated to get the low-down on the stunt. Shanta explained that it all came together in a very short time.

“Pink Sari has always used arts as a platform for promotion, like the popular ‘Portraits in Pink’, ‘Pink Sari Melodies’ and dance performances at Parramasala, but sport was something we hadn’t considered yet,” Shanta enthused. “Since we all love cricket we thought it would be an excellent opportunity to get our message across to thousands via television, print media and word of mouth. And the response we received was overwhelming.”

“The ball started rolling as Cricket Australia came on board and we received a call from the McGrath Foundation which has been promoting aftercare in the form of breast care nurses with their Pink Test initiative for the past 11 years,” Shanta informed. “We were thrilled to be working alongside them. Our community was absolutely fantastic in its unwavering support and social media played its part in galvanising the ladies.”

The Pink Sari team braved the scorching heat to come clad in their signature saris along with some men who donned pink turbans in support. A few Bollywood numbers were executed to start off the performance which were followed by classical dances by performers from the Ruchi Sanghi Dance Company. Pink Sari ambassador Kalyani Mani shared her inspiring story and a beautiful Rajasthani performance was put up for the Jane McGrath high tea.

Pink Sari started out in 2014 as a breast cancer awareness campaign targeting Indian and Sri Lankan communities. The alarming statistics pointing out that the rate of breast screening amongst the two communities was one of the lowest in the state, prompted the Cancer Institute NSW to fund the Pink Sari Project. The program was initially run by NSW Multicultural Health Communication Services and NSW Refugee Health Service with support from UTS and Breast Screen NSW.

Working closely with Indian and Sri Lankan community organisations, the project started out with a modest aim of increasing breast screening in these communities by 5 per cent in the two years that it was funded for. However, the results achieved by Pink Sari Project were phenomenal. The screening rate shot up to 17 per cent in the first two years. When the funding ceased in 2016 the program was formally handed over to the women who had been actively involved in it.

Pink Sari Incorporated is now a community-owned, not-for-profit association run by a dedicated team of six volunteers. According to the figures released by Cancer Institute NSW for 2017, the rate of screening through Breast Screen NSW by women speaking Indian languages has increased by another 14 per cent.

Shanta explained that in the absence of funding, the association works strategically to raise awareness by utilizing the resources available. “We conduct information sessions in partnership with other organisations and are always on the lookout for innovative and creative avenues to promote the Pink Sari message of early detection and the importance of screening amongst women in the target age group of 50-74.”

“Having achieved such success with breast cancer,” Shanta revealed, “in 2019 the association is planning to broaden the scope by including awareness of bowel cancer to Pink Sari. The program will focus on both men and women as the rate of screening in the community remains very low for this cancer.”

Pink Sari is working with the Cancer Institute to launch the bowel cancer initiative in March. It is already being promoted in community groups like AHIA and RAINS with information sessions lined up for February. Shanta explained that the association will be liaising with GPs to promote and encourage bowel cancer screening amongst the Indian/ Sri Lankan communities. The association will also be conducting pre and post bowel screening workshop evaluation surveys to get a better idea of the knowledge of the community before and after attending the workshop and how likely they were to get screened after attending.

Shanta assured that breast cancer awareness will not take a back seat with the launch of Pink Sari’s new bowel cancer awareness campaign. Instead the two initiatives will run side by side for greater community benefit.

She concluded that the vital message of both programs is to make the Indian/ Sri Lankan community understand the importance of early detection. Breast screening mammograms and bowel cancer screening tests take only a few minutes. Ring Breast Screen NSW on 132050 to book an appointment and speak to your GP for bowel cancer screening.

To volunteer, support or be involved with Pink Sari Incorporated, like their Facebook page to receive news, updates and posts regarding their activities.