Piecing it together: Angela Nashaat 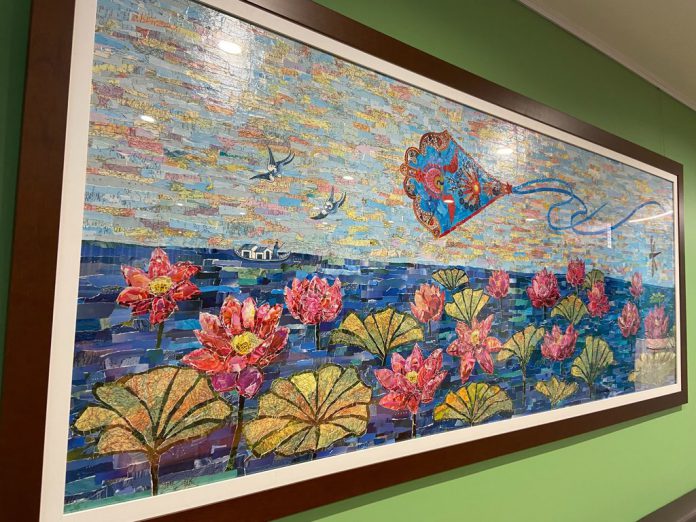 I was at the Bower Reuse and Repair Centre for a workshop on reusing plastic bags recently and my teacher was a lovely woman by the name of Angela Nashaat. She sounded very Australian but looked very Indian in a ghagra and kameez with a dupatta draped elegantly over her head. Angela had made beautiful purses out of plastic fabricated by ironing different coloured plastic bags together and there were lovely bags crocheted out of yarn created by cutting plastic bags. Not a scrap was wasted and I had good fun learning about giving a new lease of life to the much-maligned plastic bag. But what intrigued me was my teacher herself.

Angela agreed to speak about her story to Indian Link, sharing her story with such candour that I felt privileged to be a listener. Though the story is sad and unfortunate in many ways, it is also a story of endurance and grit and how a little girl realised her dreams.

Angela’s foray into art was both calculated and accidental. She recognised at a young age that art was what she wanted to do. However many tragic events happened in her early teens and she decided to leave home. Various circumstances brought Angela from New Zealand to Australia. She says, “I was 17 then and all I wanted was to drive a truck and paint walls!” It was a struggle to make a living by herself and pursue her passion. She juggled both by working as a cleaner in hospitals and doing art when she could. She did drawings for people for free or little money. “One job I did was in exchange for a camera and I started building up a visual portfolio with that. This got me more work,” she revealed, speaking of her career beginnings.

Life went by and she was soon the mother of five children. Unfortunately, one of her boys was diagnosed as terminally ill with Duchenne Muscular Dystrophy which necessitated regular visits to the Sydney Children’s Hospital. It was here that she met Marily Cintra, of Health & Art Research Centre (HARC) who commissioned artists to do art with community for hospitals. Angela was trained in mosaics for a project. This started the ball rolling. “I was soon self-employed, figuring out how to get an ABN, learning about contracts, sub-contracting people, how to use computers, essentially picking up skills along the way as needed, all while raising six kids, including one of my sister’s,” she described.

She was happy to be part of projects where art is used as a means to make people healthier in a holistic way. The tug of India was strong but dormant for a long time. Her parents had divorced when she was only four and Angela had met her father only three times in her life before he passed away. When applying for a passport, she saw that her birth certificate mentioned that her father was from Secunderabad and soon she found out this was in India.

In 2016 Angela made a decision to go to India. She connected with a charity online who invited her to do painting with kids they worked with. Once in Jaisalmer, she ended up painting a big restaurant and teaching sewing and painting to many more kids. India felt immediately like home. Explaining why, Angela says, “When I got to there, I felt everything was so normal, everything was like they were supposed to be – people were kind and caring. They had so little but were content. People around were in tune with nature.”

Angela, who loved to work with her hands, was delighted to see the desert women also busy sewing, crocheting and making things by hand. Even when she thought that India was manic with regard to noise, smells and sensations, she felt a “humaneness” in life around her and a sense of things operating on a different level – “a heart level”.

Having returned to India eight times since, Angela feels a sense of belonging in the villages of Rajasthan. She has painted art in hotels in Jaisalmer and taught sustainable art and craft to marginalised children. With a tinge of sadness and acceptance, she says, “Growing up as a troubled teenager and feeling rejected time after time, I didn’t trust adults. Here I found a family. Now I feel torn between Australia and India. I much prefer to be in India but my children are all in Australia.”

From a troubled child who lived off the streets for a while, to being a respected community artist, Angela Nashaat is now a beautiful and calm person who loves gardening, growing food, recycling, upcycling, teaching permaculture, art and craft and writing poetry. Now having met many more family members from her father’s side, through chance and social media, Angela has reconciled to and embraced her roots wholeheartedly. “I feel more whole than ever before now,” she said with a smile. Nurturing the talent she had has taken her places. Very soon, Angela is off overseas to volunteer on an organic farm and share her creative and sustainable craft and art.

When you visit Blacktown Hospital next, look out for Angela’s lotuses which adorn the walls of the birthing unit, and kites and landscapes featured in the waiting areas, all crafted from thousands of pieces of paper torn from magazines, atlases and sheet music.

Changing lives one child at a time