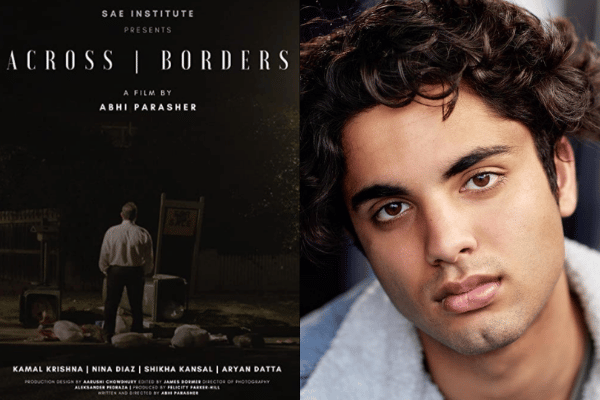 For many Indian-Australians, the past year was a difficult one made worse by a problematic travel ban that stopped them from returning to their own country. But for many in the community who grew up here in Australia, these uncomfortable feelings are nothing new.

It’s an issue that 23-year-old filmmaker Abhishek Parasher tackles in his latest work.

“Growing up in Melbourne, I saw little incidents all around me, like disputes at school, when immigrants simply concede instead of ruffling feathers. There’s a mentality that we’re ‘lucky’ to be here that impedes up from standing up for ourselves,” he told Indian Link.

His short film Across Borders narrates an Indian-Australian family’s uncomfortable experience with an unruly, racist neighbour who moves in next door. The immigrant father, Akash, is a family man who tries to avoid any trouble. To protect his family, he is forced to confront the neighbour – and finds himself worse-off when he does.

“Just because someone might not be a ‘full resident’ doesn’t mean that someone born and raised here is above them. I’d like anyone who watches the film to use the opportunity to think about themes of justice, inferiority, and where they think they fit into this world,” Abhishek elaborated.

Across Borders is set to premiere at Flickerfest Film Festival 2022 as one of the nominees for Best Australian Short Film. It has also been doing the rounds of international film festivals like the Mosaic International South Asian Film Festival (MISAFF) in Canada and Amdabad Film Festival in Gujarat.

“The feedback has been amazing so far,” he grinned. “I’ve received a lot of messages about how much people relate to the trailer and the issue at hand. Racism exists, it’s going to exist, but we should feel confident to stand up for ourselves when we aren’t in the wrong.”

Behind the scenes of 'Across Borders'
1 of 3

The project was crowdfunded with the support of family and friends through a GoFundMe page, with the crew pitching in for the rest. It was the final project of the Indian-origin filmmaker as part of his Bachelor of Film at SAE Institute.

For Abhishek, whose family hails from Punjab, Across Borders addresses crucial conversations around visa status that are finally receiving attention in the Australian mainstream.

“The film is about more than just Indian-Australians – it’s about anyone who finds themselves in a new country and how they deserve to be respected,” he stated.

Flickerfest Film Festival 2022 begins Friday, 21 January and will run to 30 January. You can book tickets here.