A Gandhi statue for Melbourne (UPDATED)

UPDATE: A day after its unveiling, the Gandhi statue in Melbourne’s Australian Indian Community Centre, was vandalised.

Police investigations continue after miscreants attempted to slice the head off the statue. Deep gashes to either side of the neck are now visible. (Crime stoppers: 1800 333 000, if you have any information).

The Prime Minister Scott Morrison who had inaugurated the statue on 12 Nov, expressed his dismay at the brazen act.

“Australia is the most successful multicultural and immigration nation in the world and attacks on cultural monuments will not be tolerated,” he said. “It is disgraceful and extremely disappointing to see this level of disrespect. Whoever is responsible for this has shown great disrespect to the Australian Indian community and should be ashamed.”

Melbourne’s Indian community finally got its Gandhi statue on 12 Nov 2021.

It was inaugurated with much fanfare by the Prime Minister of Australia Scott Morrison, on the premises of the new Australian Indian Community Centre at Rowville.

(Busts of Gandhi can also be found at Sydney, Adelaide and at the University of Melbourne’s Australia India Institute.)

Most major cities of the world, and many not-so-major ones, now have statues of Gandhi as a tribute to the Apostle of Peace, and also as a mark of friendly relations with India, and so Melbourne comes to the party quite late.

Of course, this is not the first time that Melbourne has considered installing a statue of Gandhi. The idea was mooted in Dandenong in 2018, but was at the time rejected by the community, rather bizarrely.

“There were some malicious moves behind it then, but the community has welcomed the new statue.”

He revealed that the project was on the cards when the Centre was inaugurated in March last year. He had told Indian Link then, “Our first major event, we are hoping, will be a Gandhi Week in October, with Museum activities and a lecture series.”

COVID-related lockdown threw a spanner in the works for that event, which was rescheduled to late January 2022.

“We had already sounded out the PM’s office,” Vasan revealed. “But imagine my surprise when they called a few days ago, asking if they could come by to see the Centre this week!”

He got in touch with his trustees and contractors, all of whom agreed to make time in their schedules.

Three days later, they listened as the PM recalled the prayer of the Anglican congregation at Melbourne’s St Paul’s Cathedral when Gandhi passed: Hear the cry of India, bereft of that leader whose frail person so often stood in the gap, whose life was devoted even unto death, to his country’s cause.

It was a suitable Melbourne link to welcome the Mahatma.

Those members of Dandenong’s Indian community who had rejected a Gandhi statue earlier, might well make the best of these further words of Mr Morrison. “Gandhi’s life is his message, a message that endures. It’s not a whisper from the past, but a teaching embedded in the hearts of millions around the world.”

They each relished the traditional Indian welcome of garland and kumkum dot on the forehead, wearing the floral offerings right to the end.

Was Mr Morrison in campaign mode? It’s hard to tell when he attends Indian events, given the fanfare that usually ensues. He spoke expectedly of Diwali just passed, recent meets with his good friend Narendra Modi, the great ties between our two nations, and welcoming Indian international students back. 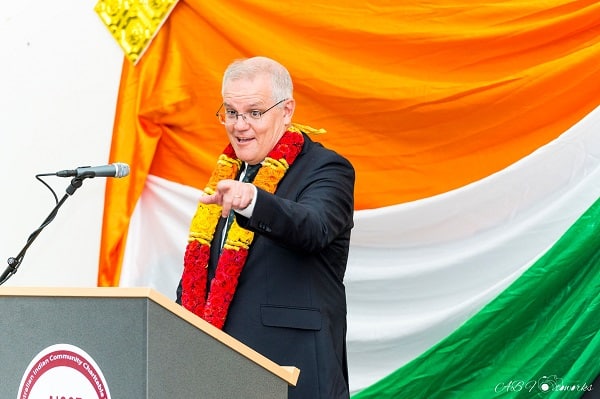 (No mention of curry this time, in case you were wondering, perhaps given the recent backlash from the younger members of the community.)

The Gandhi statue in bronze is 426 kg in weight and came from Rajasthan.

“It is a gift from the Government of India,” Vasan described.  “I am very thankful to Consul General Raj Kumar, who went out of his way to help with dealings with the Indian Council of Cultural Relations.”

The figure’s stance is reflective of the famed Salt March – when a frail man walked 4 days and 390km, hundreds joining him enroute, inspiring a nation to disobey peacefully and bring a colonial empire to its knees.

The statue will be a good reminder of the words Gandhi uttered then: Even those as powerless as a grain of salt, can make a difference.