The professor at RMIT University is recognised for her contributions to electronic engineering and gender diversity. 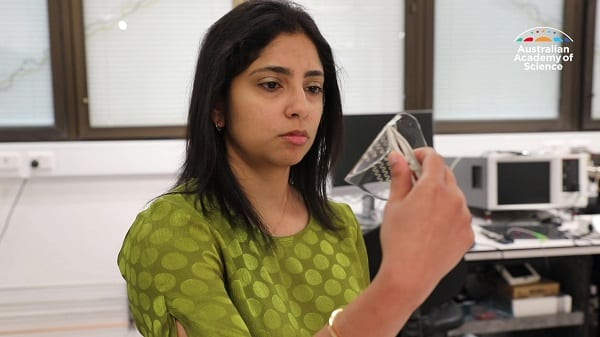 In a select group of remarkable leaders, RMIT’s Professor Madhu Bhaskaran has stood out to win the Science & Medicine category of the 40 Under 40 Most Influential Asian-Australians this year.

Madhu is no stranger to awards for her research endeavours, but she considers this a special one.

“It’s particularly special because it recognizes my Indian background, and my work in the community for enhancing diversity,” she told Indian Link with a smile.

The researcher, originally from Chennai, first came to Australia in 2004 for her postgraduate studies. With the completion of her PhD in 2009, accolades have poured in for her development of unbreakable, flexible electronics that work “like electronic skin.”

“This has been eight years in the making and we’re now working with 8 industry partners. We see its practical use in healthcare and aged care. It’s a patch, like a band aid, which can be used to monitor UV exposure on your skin and help in the fight against skin cancer. It can also help detect, and monitor, early onset diseases and chronic illnesses within the body,” Madhu explained.

If all this sounds like an invention from a sci-fi movie to you, you’re not alone.

“The goal in our team is to make science fiction a reality,” she chuckled.

The award also highlights her work towards gender diversity, such as co-founding the Women Researchers’ network at RMIT University in 2013 and sitting on the National Board of Directors for Women in STEMM Australia.

“These kinds of steps towards diversity are important because the world is diverse. Often, ‘diversity’ is only considered in terms of gender, but it goes beyond that. It’s about aspiring for diversity in thoughts, age, cultural background, and perspective – because these are truly representative of our experiences,” she elaborated.

“I’ve seen how innovation comes from diversity, and how unique ideas can come from diverse teams.”

Citing the Women in STEM Decadal Plan from 2019, she points out that societal norms and stereotypes affect girls from a young age, including their aspirations to STEM careers. In 2016, India and China reported the highest uptake of STEM subjects by girls, while Australia had the lowest percentage among Asia Pacific countries at just 27 per cent.

“It comes down to the thought process and the way people choose their careers. In Australia, we see that only 16 per cent of Australians in STEM professions are women although the population in terms of gender is fairly even,” Madhu explained.

Social experiments with school children have also shown how stereotypes dominate their idea of science.

“When young children were asked to draw their idea of a ‘scientist’, it was a white, old, balding man in a lab coat. There are stereotypes in STEM, and in a way, it can be changed with role models,” she said.

“But it’s also a case of what motivates you to join the field. There’s a popular saying that goes ‘you cannot be what you cannot see’. Well, we now have a generation of women who have had to be what they couldn’t see. They’ve had to break ceilings and just go for it!”

READ MORE: How Richi Nayak from QUT is making Twitter safer for women

Winning the 40 Under 40 award has another important purpose. Although Australia’s growing Asian-Australian community accounts for around 12 per cent of the total population, research indicates that less than 5 per cent of Australians of Asian heritage make it to senior leadership levels.

What is Madhu’s advice for young Asian Australians?

“Appreciate the fact that Australia’s multicultural society embraces differences. Overcome any shyness and learn to ask questions – no, it’s not offensive! In time, we build confidence in seeing Asian Australians around us doing well in their fields and ultimately, it helps pave the way for a future generation.”