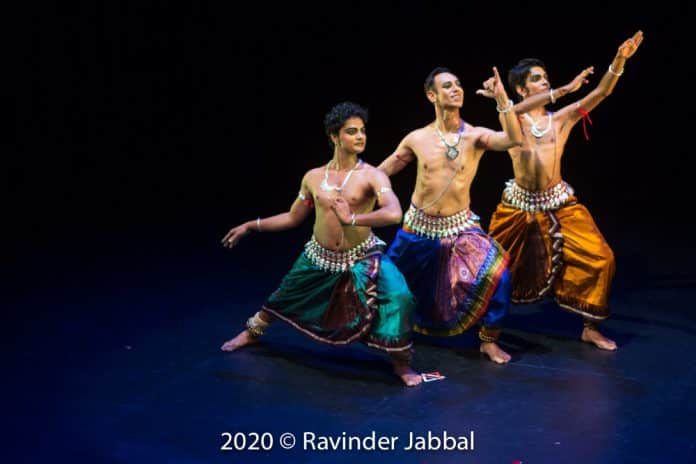 Melbourne artist Dr. Sam Goraya presented the concept of opening to the cosmic flows of creation through Kundalini in a beautifully choreographed Odissi dance performance at the Southbank Theatre recently.

Kundalini – The Awakening was held over two days just prior to the COVID related restrictions and the message couldn’t be stronger given the current climate.

For humanity to make our next collective evolutionary leap, it is important to take the time to focus on our inner selves, as our personal spiritual evolution has never been so crucial.

Through this presentation Kundalini, Sam’s aim was to guide people into alignment with the innate wisdom of their bodies, by connecting them to their inner self.

“When your chakras are in balance, aligned along your spine and activated, energy can flow unimpeded through your body. So we should live consciously, move mindfully and feel deeply,” said Sam.

Seasoned Odissi dance artiste Sam has dedicated the last ten months to the production, living in India and breathing this concept as he worked with an accomplished Tantric scholar, choreographer and a bunch of musicians. During this period he toured for two months spreading Odissi dance in Spain, France, Morocco, Argentina, Uruguay and Chile.

Both Samir and Kamal have been performing from a very young age nationally and internationally. Under the artistic direction of Guru Bichitrananda Swain of Rudrakshya Foundation of Odisha, they are currently pursuing their dreams to become Odissi exponents and choreographers.

Covering every corner of the stage with great moves, they energised the atmosphere with their dynamic performance. Like Yin and Yang, the duo synchronised their steps meticulously in the Ardhanarishvara segment. Intricate footwork combined with inherent grace and dedicated rehearsals made way for visual magic.

Sam, with his seniority and sensitive portrayal of characters, added the balance required to elevate each group segment to the sublime. Effective use of stage space and attention to his craft were visible in every move during his solo performance on Durga Stuti.

The artists held the audience in thrall with their expressive abhinaya. Anger, passion, elegance was conveyed beautifully with raising of brows, smiling coyly and narrowing of kohl lined eyes.  With amazing swiftness they swapped roles from imposing Shiva to graceful Parvati to raging Durga.

Professionally recorded music and playback commentary propelled the story forward seamlessly whilst a simple backdrop kept the focus mainly on the dancers. To touch, to move and inspire; this is the gift of dance and the talented trio were able to achieve that easily with their nuanced performance

The fundraiser was organised by newly established Australian Indian Community Organisation (AICO). This not-for-profit organisation supports Odissi, one of the most ancient Indian classical dance forms and makes it more accessible in old age homes, rest homes, multicultural and community events in Australia and NZ. AICO also encourages artistic exchange among distinguished artists from India, other parts of the world and local artists

Audience numbers dwindled at the last minute amidst growing concerns of COVID at that time prior to any Government-regulated restrictions. Those who attended however were glad to look for enlightenment, engagement and entertainment instead of toilet paper.

“I felt the vibes clearly, it was so inspiring. I loved it,” said Shari Ashley main dancer for Robbie Williams who was in town to perform with him. The show was cancelled along with the Grand Prix due to the COVID scare.

The Sydney, Bali and Auckland stagings of Kundalini-The Awakening were also cancelled in adherence to restrictions on venues and numbers for the safety and health of the community. Always positive by nature, Sam intends to repeat his performances in Melbourne and complete the tour next year.

His spectacular presentation was not just about dance; it was a prayer for the future, a remembrance of the past and a joyful exclamation of thanks for the present.