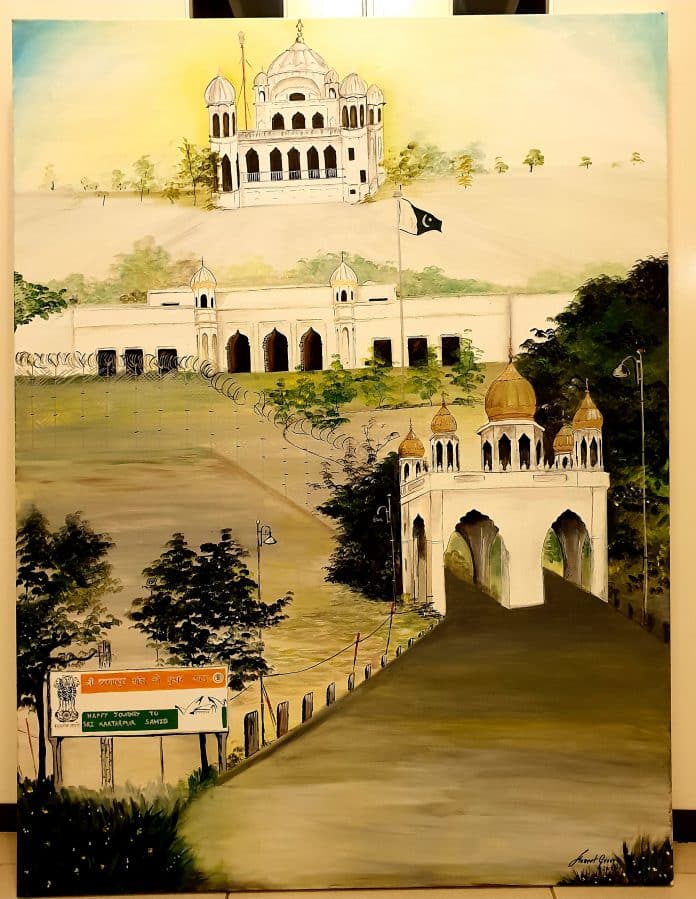 It took Pakistani workers only a few months to build the Kartarpur Corridor, creating a pivotal moment in the history of India-Pakistan relations. On the other side of the
world, a Melbourne artist painted a likeness of it, within 48 hours, to be presented to the Chief Minister of Punjab during his visit to Birmingham UK.

Both were managed in record time.

Haneet Grover Ahuja (Nitu) of Melbourne Art Academy was commissioned by Indian Government officials in the UK to create a special piece of art to be gifted as a token of appreciation to Captain Amarinder Singh. The 3ft x 4ft acrylic on canvas now adorns the wall of the Minister’s office in Punjab along with a special plaque acknowledging the Australian-Indian artist.

A friend of Nitu, who works in the Indian consulate in UK, initiated this global collaboration by calling her from Amritsar to invite her to create the work. He wanted both
India and Pakistan to be seen in the same frame.

Explaining to Indian Link how it all came about, Nitu said, “I knew about the Kartarpur Corridor and its huge significance, but it took me an entire day of looking through hundreds of photographs and videos to research the subject matter.”
She added, “It was challenging as time was short and the illustrative context had to be politically correct. At the same time, I was excited because painting is a natural gift to me
and I do not feel pressure when I paint.”

Juggling her appointments with clients, as part of her real estate business, Nitu worked though nights to bring to fruition her friend’s vision. The completed work was then couriered from Melbourne to China, via Germany, Paris, and Birmingham to finally find pride of place in India.
“It was an emotional time for me as I am very proud of India, my country of origin,” said Nitu. “To create the Indian tricolour and the Pakistan flag was a great honour and I lived through the journey of those who visited the religious site.”

The Kartarpur Corridor connects Dera Baba Nanak Sahib in Gurdaspur of Indian Punjab with Darbar Sahib in Kartarpur in Narowal district of Pakistan’s Punjab. It is the last resting place of Guru Nanak Devji, founder of Sikhism.
Despite the labyrinthine politics of India and Pakistan, the Kartarpur Corridor is considered to be a positive step in making peace between the two neighbouring countries. Pakistani Prime Minister Imran Khan opened it on 9 Nov this year, allowing visa-free access to Sikh pilgrims from India.

The Kartapur Gurudwara covers 42 acres, making it one of the largest in the world.
“This painting was totally in my comfort zone as the requirement was monochromatic and realistic,” said Nitu when asked about her artistic expression. As a style, she tends to gravitate towards naturalism as she does not like distorting any likeness, and prefers natural, accurate and detailed representation of her subject.

Nitu has been teaching art for the past 20 years and her work has been displayed in many exhibitions including the top 100 artists’ exhibition in India and the prestigious Lalit
Kala Academy. After acquiring her degree in Bachelor of Fine Arts from Delhi she took a Masters’ degree in Fine Art from RMIT in Melbourne.

Despite winning many awards and seeing her paintings picked up by art collectors in India, she struggled to find her niche in Australia. “Initially, I had no contacts, no avenues,
no galleries, and no artist friends and it was hard to adjust here after coming from the hub of Arts in Delhi,” she recalled. She decided to support her husband KD Ahuja with his real estate business and eventually opened her own Melbourne Arts Academy.
“I felt that the community in Melbourne was ready for a change,” Nitu observed. “Indian parents who were inclined to underestimating arts, in general, were suddenly keen on sending their children to learn from institutes like mine.”

She teaches both adults and kids in a relaxed, positive environment through her newly launched Arts Academy. According to Nitu, the emotional release of drawing and painting can have a therapeutic effect on adults and children. It can help relieve stress and positively impact someone’s behaviour, development, and psychological well-being.

“The kids who come to my classes are happy kids because they are motivated to learn and discover and can visually express their emotions,” claimed the talented artist.
“Incorporating arts into your child’s life is very important for their development, and I am delighted that I can contribute towards their progress.”

Her own parents encouraged her from childhood and for as long as she can remember, she has been painting. Neetu feels her artistic genes are inherited from her mother who was a brilliant artist but sadly never got to further her dreams after marriage. Nitu, on the other hand, plans to transition full time into pursuing her artistic passion. The Kartarpur Corridor painting couldn’t have come at a better time for her.