A Sydney memorial to Indian ANZACs brings pride to the community, as well as some criticism 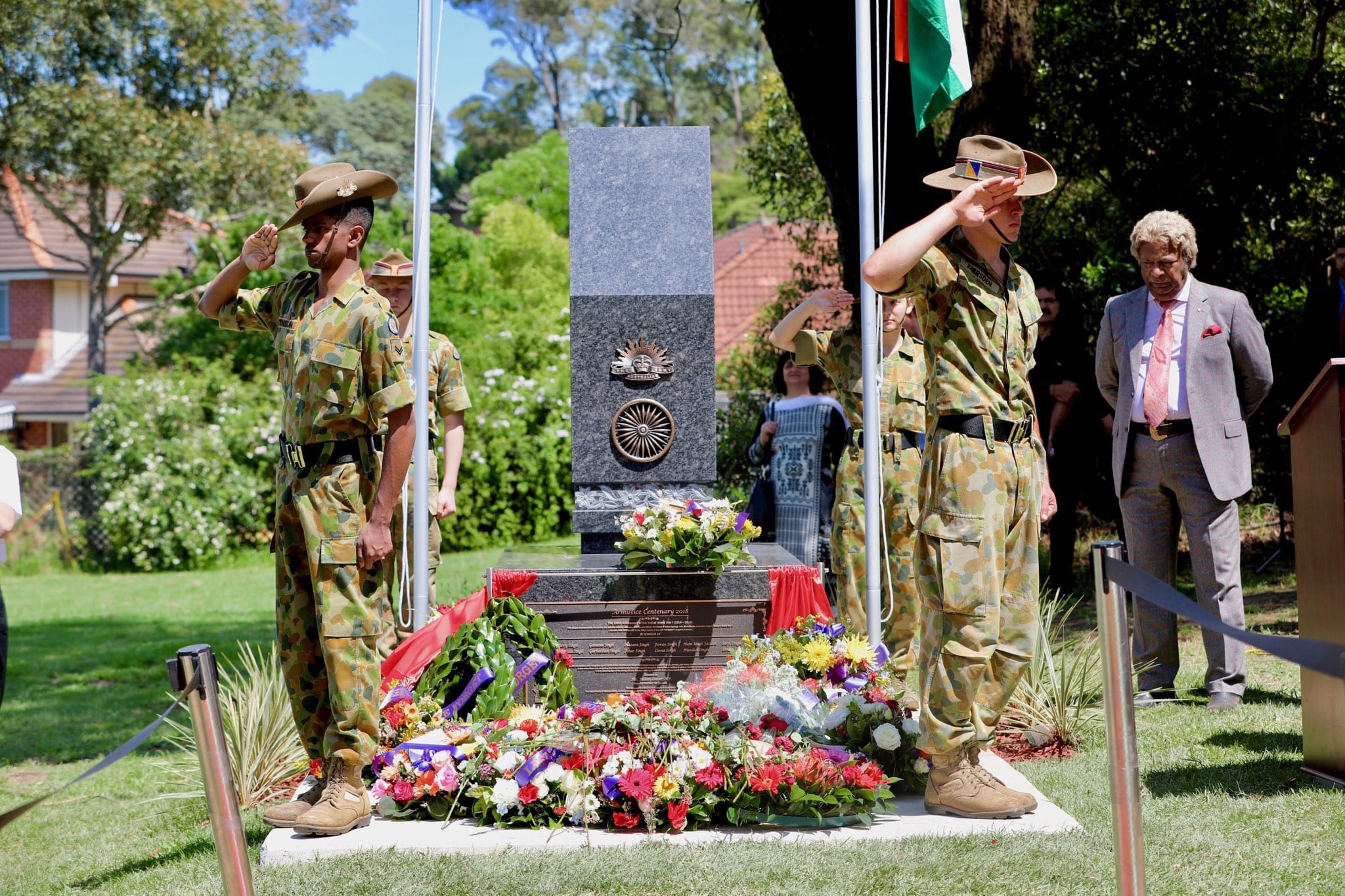 Jawan. It is a word that means youth. It also means soldier – conjuring up an image of an upright, strong, silent fighter in the army.
In recent days, the term has been used in Sydney’s Indian community in both its connotations, in remembrance of those brave youths who served their adopted home in World War 1 as part of the Australian Imperial Army.
On the eve of the centenary of the Armistice, a memorial was dedicated to these Indian-origin soldiers, the first of its kind in Sydney.

On a sunny spring morning, over 200 people from the Indian-Australian community, the local RSL and Hornsby community gathered in suburban Cherrybrook to mark this special occasion. A simple but solemn ceremony with many Indian ex-servicemen resplendent in their uniforms and shining medals pinned proudly on their chest, it brought home the point of the sacrifices these men and women make to give both their countries, Australia and India, the privilege of being free.

The initiative taken by the Hindu Council of Australia led by its President Prakash Mehta in creating this landmark in NSW needs to be commended. It gives the Indian-Australian community a special place to gather to celebrate peace, be it India’s Independence Day, ANZAC Day or even Armistice Day when the guns fell silent at the end of World War 1 which left up to 13 million dead.

Speaking at the remembrance service and the unveiling of the cenotaph, the Federal Member for Berowra Julian Leeser summed up the importance of this milestone when he said that the ANZAC Jawan memorial will remind all Australians that the Indian community is not a new community but has been here a long time, and has made contributions to Australia in war and peace. He added, “It will be a reminder that Australia and India have marched together in the past to defend freedom in times of war and we will march together in the future to defend our freedoms.”


On the cenotaph itself, the Ashok chakra is prominent in its nod to an Indian heritage. Above it, the logo of the Australian Army, reminding us in this instance, of the ‘surya’ or the rising sun. The reference to both janmabhoomi (birth place) and karmabhoomi (adopted country), could not be clearer.
Rajeev Maini, the architect of the cenotaph and consulting engineer Vijay Badhwar, both had a unique concept for the design. Maini explained the cenotaph in detail, “The stone plinth represents the high esteem we have for our brave soldiers. The vertical stone represents our soldiers standing tall and firm in defending the nation. And the missing piece represents the lives cut short, the extreme sacrifice given by the soldiers. The floral decoration at the bottom of the tall stone is our offering of gratitude to the soldiers. A total of 12 flowers carved around the base represent the 12 brave souls. This number is also represented by the 12 plants planted around the memorial. Granite was chosen as a material for the memorial to represent their inner strength, commitment and valour, and Indian granite was chosen to represent a connection with their place of origin.”

However the names of the 12 soldiers who have honoured on the cenotaph – Davy Singh, Desanda Singh, Ganessa Singh, Gurbachan Singh, Hazara Singh, Johar Singh, Juwan Singh, Linna Singh, Nain Singh Sailani, Nundah Singh, Saran Singh and Sirdar Singh have raised some controversy.
Len Kenna and Crystal Jordon from the Australian Indian Historical Society Inc have been researching the Indian contribution to ANZAC since 1985. They have raised their concerns to the Hindu Council about the 12 names that have been honoured in the cenotaph.
Their opinion is that the names have not been thoroughly researched. “Of the names etched on the cenotaph there are four names of men who were either discharged or rejected a few days or weeks after enlistment, and did not embark for overseas duty with the Anzacs,” Jordan asserted. “They were Juwan Singh, Nundah Singh, Linna Singh and Johar Singh. The list does not include any Muslim names, despite the fact a number of Muslim Indians did enlist, including the famous Cass Mahomet, the ‘Indian Digger’ and Charles Khan, who received a Meritorious Medal at Gallipoli, nor does it include Anglo-Indian names. Several Anglo-Indians did enlist in the A.I.F. including Major General William Birdwood and Charles Henry Fairbeard, to name two, who were born in Kirkee, India.”
In fact, it would have been better not to include any names at all, Jordan suggested.
When these issues were raised with HCA President Prakash Mehta, he clarified that the names were not only taken from an SBS article by well-known award-winning journalist Manpreet Singh, but were also confirmed with research centre in the service records of the Australian War Memorial, Canberra.
“These names were then given to the Department of Veterans Affairs and local RSL club; no issue or concern was raised by either of them for these names,” he told Indian Link.  “This cenotaph is dedicated to all servicemen of Indian origin including these named servicemen as per Anzac archives. All of these persons enlisted for Anzac during World War I period and that was the criteria for selection. Some of them might have been discharged but that does not take away their intent to serve Australia. It was all about the contribution of servicemen of Indian origin in Australia, by enlisting at the time of need during World War 1. An honest efforts has been made to recognise the services of these people on Remembrance Day of Armistice centenary.”
While there may be different views on the names etched in the cenotaph, what needs to be kept in focus is the creation of this landmark which is a watershed moment for the Indian Australian community in Australia. With the local community reaching almost 700,000 in numbers and a political debate on immigration and immigration numbers, an ANZAC Jawan cenotaph can only bring the Indian community closer to the mainstream. The Hindu Council under Prakash Mehta, Bhagwat Chauhan, Ashwani Jain, Ashwani Sharma, Pravin Amin, Rajiv Jain and Praveen Gupta need to be acknowledged for their efforts and work in this landmark monument.