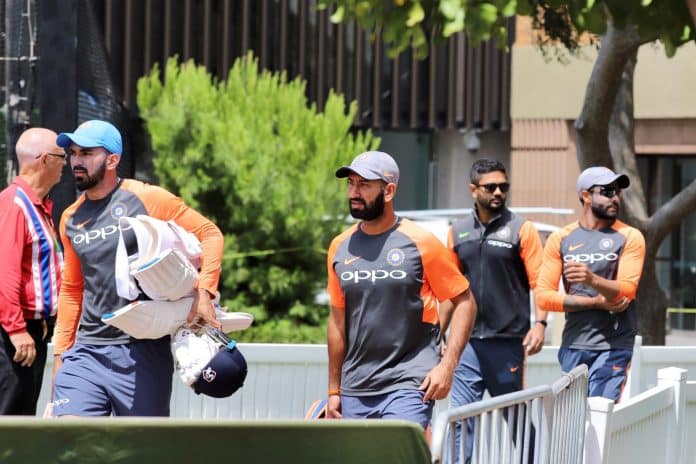 Reading Time: 4 minutesIndia have done it, at last, winning the first Test of a series in Australia. It took 70 long years, starting from their inaugural Test two months after the country attained independence.
The victory at the Adelaide Oval on Monday is only India’s sixth Down Under and the sweetest as it was hard fought and came 10 years after Anil Kumble’s team won at, of all venues Perth, on a pitch considered pace-friendly. The second Test of this series is at Perth, but not at the good old WACA. It is at the new Perth Stadium hosting its first Test.
The series opener was a test for the Indians who lost their first Test in England by the identical margin of 31 runs they won at Adelaide. A couple of months earlier, they were beaten by South Africa by 72 runs in the first of the three-Test series after both the teams collapsed for 130 or so in the second innings.

Congratulations team! What a fantastic start to the series. Our bowlers did great and superb innings by @cheteshwar1 and @ajinkyarahane88 @bcci Way to go! #INDvAUS pic.twitter.com/9XxqLn2Z6t

Despite their hold on the game by the end of the fourth day’s play, the Indians were haunted by their previous experiences and things did not make any better as the lower-order Australian batsmen got stuck with a bit of pluck and luck.
Nathan Lyon’s prophecy of “we definitely believe we can win this and we still believe we’re in this game,” adding that Shaun Marsh is also confident and has the belief he can be the hero of Australia’s victory, is proved right, though only partially.
The Australians may not have won, but they were very much in the game till the end. Marsh couldn’t keep his word and once he and his overnight partner Travis Head’s departure by the 73rd over at 156 for six, India looked well on their way.
Lyon himself was there till the last wicket fell as the leeway came tantalizingly close to the Indians’ comfort. Skipper Virat Kohli put it in perspective, “I wouldn’t say that I was cool as ice, but I tried not to show it.” He could not have been more truthful seeing the last four Australians, all bowlers, adding 104 runs.

What a way to start the series!#TeamIndia never released the pressure. Superb batting by @cheteshwar1 with crucial knocks in both innings, @ajinkyarahane88 in the 2nd innings and excellent contributions by our 4 bowlers. This has brought back memories of 2003. #INDvAUS pic.twitter.com/4gmviaKeCC

If only the Indian bowlers had applied themselves similarly in the second innings and the last five wickets had not crashed for 25 runs, the last four for four runs, they could have batted Australia out of the Test.
To pick an Indian hero would be unfair to the eleven that played. Yet, Cheteshwar Pujara is the man who held the innings together, getting the others to play around him. If the lower-order stood by him in the first innings after the top-order folded and in the second he and Ajinkya Rahane gave the Indians a score that could be defended.
This inexplicable collapse should be a worrisome aspect of Indian batting, all so frequently, when their four-man attack has been unfailingly getting 20 wickets in a Test. It is more glaring looking at the way the Australian tail fought resolutely on a fifth day Adelaide pitch against the world’s top off-spinner Ravichandran Ashwin and three never-say-die pace men Ishant Sharma, Mohammed Shami and Jasprit Bumrah.
The value of Man-of-the-Match Pujara’s 194 runs in the two innings (123+71) should be weighed in gold. All the rubbish heaped on him of not the ideal Number 3 because he doesn’t rotate the strike or not a quick runner between the wickets has to be put at rest for ever after this Test.

Pujara has shown there is no better player than him for any situation. He is the one top-order batsmen who has shown how to hold an innings in trying conditions and also how to farm the attack nursing the tail-enders. Rahane is not far behind.
The other subject close to the Twitterati’s heart is Rohit Sharma and Rishab Pant. Both look the two sides of a coin, except that Pant is a little more predictable in his tonking. Both will have to curb their instincts and take Test cricket more seriously, particularly Rohit who is experienced enough not to throw his wicket away.
Pant’s 4,4,4,6 off consecutive deliveries of the crafty Lyon looked the right at that stage in the game, though gifting the wicket away to the next ball looked silly. At 21, he can be expected to learn soon to be a good wicket-keeper-batsman.
Pant’s wicket-keeping should be seen in different shades. He looks safe standing back and has to get the hang of Ashwin’s variations soon. You can’t talk about his consistency behind, and he will remember how he missed setting the world record for the number of catches, by dropping Lyon before the game got nerve-wracking. His 11 catches in the match is a fantastic effort.
Coming to the bowling, rarely have India been blessed with three genuine pace bowlers who consistently clock 145 km plus while maintaining their line and length. What was heartening at Adelaide was their use of the bouncer, particularly Ishant who has developed into a bowler who keeps his ball up. Shami and Bumrah always look like getting a wicket on the Australian pitches. They looked clearly superior to the much touted Australian pacers.
With hardly any time to rest before the Perth Test, all the Indian bowlers need to relax as there is no scope for any changes in the winning side, except if Prithvi Shaw is fit he can come in for Murali Vijay.
Even the DRS is getting more curious and the Indians, who objected to its introduction for a long time before falling in line, should be happy that they were the ones to benefit the most at Adelaide.
More excitement is in the offing in the series.