Breathe your way to better health 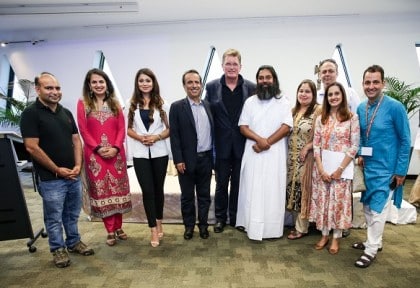 By not pushing your mind but allowing it to experience the silent depths of its own nature, you can meditate effortlessly, according to Swami Sadyojathah from the Art of Living Foundation (AOL).
AOL’s International Affairs Director was in Australia recently for the Way To Happiness National Tour. He also participated in initial talks to discuss the possibility of holding the next AOL World Cultural Festival in Australia.

Swami Sadyojathah is the name given to him by his guru Sri Sri Ravi Shankar, the revered founder of AOL.
“My name may sound difficult, but it has a simple meaning. It means ‘born now’,” said Swamiji when asked about the origins of his unusual name.
Born into a royal family in Kerala as Raghu Raj Raja he qualified with a B. Tech in Mechanical Engineering and had a leaning towards communism before his life-changing meeting with Sri Sri Ravi Shankar in 1993. He became Sri Sri’s prime disciple and is a major spokesman for AOL.
As coordinator of International Activities for AOL, he travels extensively and teaches meditation and mindfulness, globally. He is also the Founding Director of the Sri Sri College of Ayurvedic Science and Research.
Speaking to Indian Link on the last leg of his Australian tour, in Melbourne, he said, “The whole movement of Sri Sri’s Foundation is based on the Art of Living not the Art of Leaving. There is a big difference between living and existing. Unfortunately, a lot of people in the world simply exist and we need to have this shift from existing to actually living…but we do not need to leave anything in order to attain that higher consciousness.”
He went on, “The word dispassion (vairagya) has been repeatedly used by spiritual leaders and there is a general feeling that one needs to renounce everything in order to attain spirituality. But the real meaning is different.” According to the learned yogi, “Being in and enjoying the moment without feverishness is the real meaning of dispassion.”
Through the philosophy of Art of Living, Swamiji articulated how art is all about appreciation. For example, music or dance becomes art only when it is enjoyed; similarly, once you learn to appreciate your own life it becomes an art. Daily and ongoing stress can be an impediment, but there are techniques that can help remove these obstacles, one of them being Sudarshan Kriya.

As a major proponent of Sudarshan Kriya he described it, simply, as a technique that incorporates rhythms of the breath that harmonise the body, mind and emotions. It is beneficial in eliminating accumulated stress and flushing out toxins whilst leaving the mind energised and relaxed.
Swamiji was quick to dispel the myth that meditation is about concentration. On the contrary, he claimed, meditation is about de-concentration. It is best conducted when one is relaxed and not focused on reigning in their thoughts.
“As soon as we try to achieve a thoughtless state, our mind is bombarded with thoughts and we start fighting those thoughts as whatever we resist will persist.”
Swamiji maintained that concentration is not required to meditate, instead concentration is a result of meditation and someone who meditates regularly will subsequently gain focus and concentration.
“Meditation is no more a luxury. It has become a necessity in life but it can be done effortlessly,” said the guru who imparts advanced training on the Sahaj Samadhi or effortless meditation.
According to him, a rested mind is more dynamic and techniques like Sudarshan Kriya and Sahaj Samadhi among others, help in attaining a deep sleep that creates a feeling of calmness and alertness that can transform lives.
When asked how youth can be engaged better in a digitally dependent world, Swamiji reiterated the need for youth to also meditate.
“Depression, suicides, hormonal changes, peer and societal pressure; there are many challenges that youngsters face nowadays,” he said. “One cannot avoid technology altogether, however a calm, centered and balanced mind can be achieved by practicing any of the various breathing techniques consistently.”

Swamiji and AOL have indeed themselves embraced technology and made efforts towards improving equality between men and women.
“I agree there should be more women as leaders,” said Swamiji, when asked why there is a lack of women in spiritual and other leadership roles.
He continued, “In fact, AOL is doing a lot of work in the field of women empowerment in India where volunteers are raising awareness against female foeticide in the villages. They are also encouraging self-reliance by helping women in acquiring skills like learning computers, tailoring, and making agarbatti (incense sticks). Having an income gives them independence and they are less likely to be exploited.”
With regard to the current state of the world, Swamiji stressed the need for tolerance and education.
“During the short time we are here on this earth, hatred, animosity and killing in the name of religion is really not worth it. We can and should all live in peaceful coexistence,” he said. “The voice of non-violence should be heard loud and clear. There are more than 7 billion people in the world who live peacefully and only a few thousand who believe in violence and terrorism. However, their voices come across louder than that of the vast majority. This needs to change. Thanks to social media there is a change happening and people are now able to voice their protest in a non-violent forum. There is a lot more to achieve and education will help in ensuring that the message of tolerance is widespread.”

Swamiji was instrumental in coordinating a massive World Cultural Festival in New Delhi last year where people from 156 countries, including 3000 dignitaries, 2500 spiritual and religious leaders, and international and Indian artists came together to celebrate AOL’s 35th anniversary.
According to Swamiji, the World Cultural Festival was a celebration of diversity of cultures from across the world whilst simultaneously highlighting Vasudhaiva Kutumbakam – the unity of the human family.
“Just by having a three-day event we were not likely to attain world peace,” said Swamiji. “However, it was an attempt to bring people together inspired by Sri Ravi Shankar’s dream and vision to do better towards making the world a big family.”
Swamiji said there is increasing interest in making the World Cultural Festival an annual event rather than once every five years. He said he had held initial discussions to see if the next event could be held in Australia.
His guru Sri Sri Ravi Shankar once expressed his wish ‘to see a smile on everyone’s face’, said Swamiji.
“This might sound Utopian, however, one has to dream big, make a start and move towards that dream for anything to happen.”