Who you need to know this World Cup 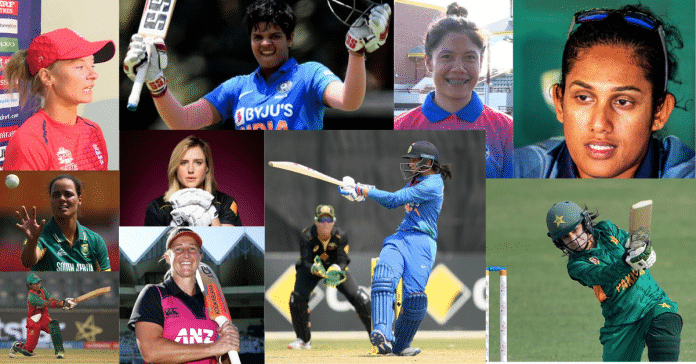 With the ICC Women’s T20 World Cup coming to Australia for, somewhat surprisingly, the first time, Australian fans will finally have an opportunity to see first-hand some of the game’s biggest stars, many of whom have never played international cricket in Australia.

As the tournament gets underway, we take a look at some of the key players to watch, including an exciting mix of carefree youngsters and seasoned veterans across a wide cross-section of teams.

Perhaps the most elegant batter in the game, the stylish left-handed opener has been in fine form in the lead-up to the tournament. Mandhana has notched up 621 runs in 19 innings since the beginning of 2019, and was particularly impressive against Australia in both the group stage and final of the curtain-raising tri-series.

Mandhana, who played in the 2018-19 WBBL season, has a great depth of experience behind her in Australian conditions, despite being just 23 years old. With her rare ability to strike at a ferocious pace while maintaining her shape and form, Mandhana is our pick to be the player of the tournament.

The tournament’s most exciting youngster, 16 year-old Verma – Mandhana’s partner in crime at the top of the Indian order – could well be the X-factor that sees the Women in Blue lift their first World Cup in any format.

Verma has widely drawn comparisons with Virender Sehwag, and is seen as an “atypical” Indian opener. While in the past, the Indian women’s team has produced “technical” batters with a more subtle elegance, Verma is poised to launch blitzkrieg after blitzkrieg in an aggressive brand that will put the pressure on opposition bowlers from the outset.

Wyatt was the top run-scorer in the 2019 KIA Super League, England’s franchise-based women’s T20 cricket competition. Along with Verma, Wyatt will be the most feared opening batter in the tournament, having scored at a strike rate of 166.42 in the Super League.

Crucially for England, Wyatt also scored a mountain of runs in her stint in the latest edition of the WBBL, and England will be hoping Wyatt can put behind her some very ordinary performances in the tri-series against Australia and India.

A formidable all-round talent with bat and ball, Perry is once again shaping up as the critical lynchpin in Australia’s middle order. With Alyssa Healy’s form taking an alarming dip at the worst possible time, Australia may once again look to its most well-known and accomplished player to deliver the hosts a fifth T20 World Cup.

The leading run-scorer in the 2019-20 edition of the WBBL, the newly appointed White ferns captain piled on 769 runs in her summer down under, at an average of 77 and strike rate of 130. Devine also picked up 19 wickets at an average of 20.

To cap off an already stunning summer, in February, Devine racked up three fifties, an unbeaten century, and four wickets in four T20 internationals against South Africa. Expect Devine to lead from the front once the tournament gets underway.

Another player with impressive credentials in Australia, the Sri Lankan captain has already notched up two tons down under this summer, having racked up 113 off just 66 balls in a T20 against Australia in September last year, followed by another ton against the same opposition in Brisbane in the third ODI.

Notably, Atapattu was also the first Sri Lankan player to play in the WBBL, in the 2017-18 edition.

Unlike many players on this list, Khan has never played a T20 in Australia, and has underwhelmed in her 9 ODI innings here, scoring just 152 runs.

Khan was steady in 2019, scoring at a strike rate of just 100, but it was in the 2018 T20 World Cup where Khan really shone, scoring at an average of 45 and a strike rate of over 130. Pakistan will be heavily reliant on their second-highest ever T20 run scorer to step up again on the big stage.

The South African vice-captain loves playing in Australia. In this year’s WBBL, Tyron bashed 248 runs at an astonishing strike rate of 178.41. For comparison, that’s the highest strike rate across both the men’s and women’s Big Bash seasons this year, edging out Tom Banton’s 176.98 for the Brisbane Heat.

A fearsome hitter, Tyron’s familiarity with the conditions, and the value for shots on offer on Australian grounds all point to an explosive tournament ahead for the experienced all-rounder.

The ICC’s 2019 Emerging Player of the Year, fast-bowler Sutthiruang is a product of Thailand’s Under-19 program and will be rearing to go in Thailand’s historic T20 World Cup debut.

Sutthiruang, who has long been the country’s best bowler, was also the leading wicket taker in the qualifiers, picking up 12 wickets at the excellent economy rate of just 4.16.

A team that has won only one game in their 12 T20 World Cup matches to date, Bangladesh may have to rely on individual players to come up with moments of brilliance to force an upset in unfamiliar conditions.

One of those players is Fargana Hoque, who is the only Bangladeshi woman to hit a T20 international century (albeit against the Maldives). Hoque has performed under pressure before, starring with 67 in Bangladesh’s tense series-levelling chase of 211 against Pakistan in November last year.