Kerala: Bringing God’s Own Country back 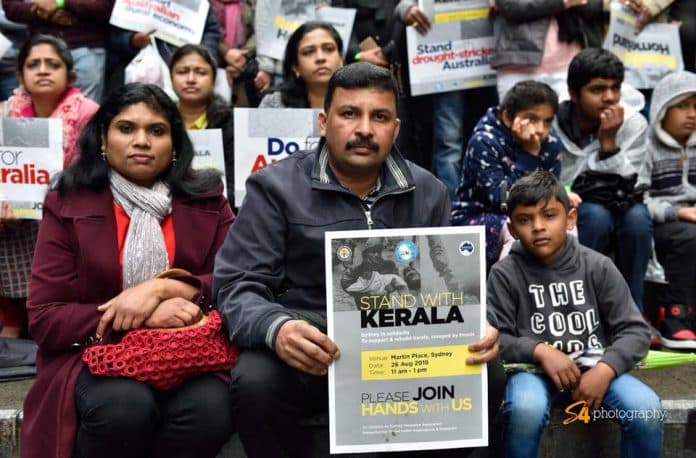 Over 400 lives lost, countless homes destroyed, livestock and pets lost – the floods in Kerala have ravaged the state like nothing before. After what seems like an eternity, the water is finally receding and people are taking stock of what’s left behind, picking up the pieces and trying to gather some semblance of normalcy.
And while their distress is unimaginable, it’s just as bad – if not worse – for their loved ones who live on the other side of the world who have been waiting and watching with bated breath to find out if their families are safe.
“My parents built a house in Valakom (Kollam) last year but my father still goes to the old house in Muvattupuzha during the day,” Raveesh John, Secretary of Perth United Malayalee Association Inc. tells Indian Link. “The town was under water for three days and we lost everything – our documents for the old and new house, paperwork, furniture, our countless possessions that were still there.” John, whose parents MV John and Elizabeth are senior citizens, adds, “My father is 75 years old and there was little he could do. He is still in depression. They’ve lost everything.”

Candlelight vigil by the Brisbane Malayalee Association
1 of 6

BRISBANE MALAYALEE ASSOCIATION’s CANDLE-LIGHT VIGIL
He recalls the panic that had set in when he couldn’t contact them for four days. “It was a tense time for us. But luckily they had some help. My father is a member of the local cooperative bank which was handing out free rice. The Panchayat also stepped in to help. Actually, it’s things like this they needed then, not money.”
Bejoy, from Adelaide, whose parents live in Chengannur, has a similar story. The municipal town in the Alappuzha district is one of the worst-affected areas. “I remember that after the floods, for two days no one came. Finally, on the third day, our neighbours were going around in a boat rescuing people. Another neighbour was in a boat, supplying rice to people.”

“My classmate’s father, an 85 year old man was alone in the house when the floods struck. He had to crouch on the terrace for four days with no food or water. He survived on leaves and rain water before someone came for him. The helicopters couldn’t airlift in many areas because of the trees and wind wreaking havoc.”

Bijoy’s wife Divya, who’s also a committee member of Adelaide & Metropolitan Malayalee Association, adds, “The airlifting rescue ops were also difficult because Google and GPS were showing two different locations, so technology didn’t exactly help.”
As many others have been saying, it was the fishermen who helped rescue a majority of stranded people. Bijoy says that the defence forces, especially the Navy did try their best to rescue people. They dropped food packets on the roofs, but they were no match for the currents in their inflatable boats. “The fishermen, on the other hand, did a fantastic job. We should really thank them for their help. They know the lay of the land and knew how to navigate the flood waters. It’s their experience that saved us.”
Melbourne-based Dhanya Samuel, whose parents are in Kerala, says the extent of devastation left behind by a natural disaster can only be truly felt when it hits one’s own home. “It was a harrowing 4-5 days that I went through recently. While my father and mother didn’t need to be evacuated (our home was at a slightly elevated angle), the rest of the colony where our house is situated had to be. But no power supply meant that I hardly could communicate with them.”
She adds, “My sister’s family resides in Chenganoor. There was no connectivity, so we had no idea if they were safe or not. Rescue help line numbers, Facebook posts and Whatsapp forwards were the lifeline we held to. One of the older members of the family had a fall as his cot was placed on top of a table to avoid the flooding water. It was a deep gash on his head and he couldn’t be taken to the hospital. Luckily volunteers carried him through the water to the house of a doctor nearby who was able to give him the necessary medical treatment. He was then rescued by the Navy boats and taken to hospital.”
Now that the flood waters are receding, citizens face yet another predicament: post-flood clean-up. “There is over two feet of mud inside houses. And although people from Seva Bharati are really helping, there’s so much more to be done. There just isn’t enough manpower,” says Bijoy.
And when resources are few, the effects are inevitable: the cost of water, food and travel have tripled. “People have lost their life savings in one swipe. Where’s the money to pay three times the money for something as fundamental as drinking water?”

Sydney vigil at Martin Place
1 of 6

For some, the ordeal of cleaning up has been even more terrifying. The flood “brought up everything” as Gita Sudheer from NSW says. Most of her family – mum, grandmother and extended family live in Kerala. Her father’s brother lives in Thrissur, she says. “He woke up around midnight to use the bathroom and when he put his feet down, there was water up to his knees. And not standing water, either. When he looked around, everything was floating around him – the fridge, the gas, furniture. Can you imagine that?”
She tells us about her mother and cousins in Chalakudy, a municipal town situated on the banks of Chalakudy river in Thrissur.

“They were airlifted after spending three days on the terrace. And when they
came back to clean the house after the water receded, they found a crocodile
and snakes in the house!”

After what is hopefully the end of one of the biggest natural disasters the state has seen in a century, citizens are trying to get their lives together. Their families across Australia, meanwhile, have been conducting fundraising events and vigils to help in whichever way they can. Madanan Chellappan of the Brisbane Malayalee Association says the organisation has teamed up with Caboolture Hospital in Queensland to set up a fundraiser next week as many of its employees are Malayalee. The BMA also had a candlelight vigil earlier this week which was attended by Brisbane City Councillor Amanda Cooper and Lord Mayor of Brisbane – Graham Quirk.
AMMA, which was to host Onam festivities on 18 August, turned the festival into a fundraiser too, and donated all the profits to the Kerala Chief Minister’s Distress Relief Fund (CMDRF). PUMA raised close to $17,000 and is hosting a fundraiser on 2 September with other Malayalee associations in Western Australia.
Dhanya has decided to engage in a small private fundraising to help out her maid whose house was damaged in the floods. “While the Government is offering all possible help, it is important for all of us to come together and do our bit, the least we can from so far away.”
The mission is singular: to help Kerala get back on its feet. Whether it’s through prayers, vigils or events, the Indian Australian community is leaving no stone unturned. It is truly a lesson in resilience.
Donate to the CMDRF here: https://donation.cmdrf.kerala.gov.in/