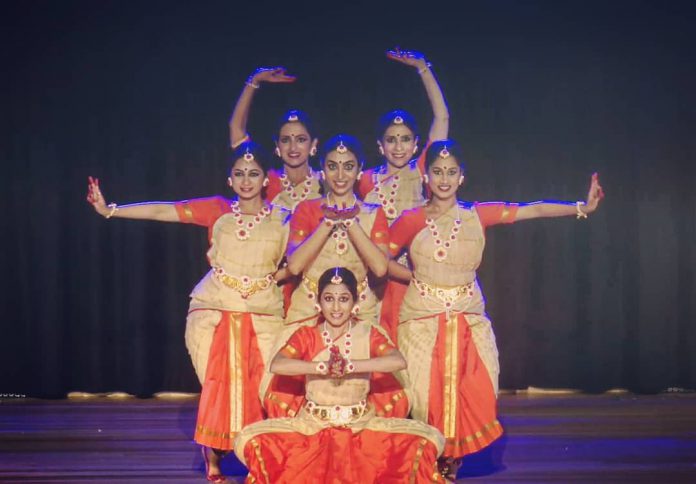 “If you want the bloom of youth and fruit of later years, If you want what enchants, fulfils, and nourishes, If you want heaven and earth contained in one name, I say Shakuntala and all is spoken.” These were the words with which German poet Goethe responded to the ancient Sanskrit playwright Kalidasa’s epic Abhijnana Shakuntalam in the 18th century. An audience in Sydney had the opportunity to become similarly spellbound and share Goethe’s wholly captivated sentiments in 2019 as the classic play sprang to life on stage in the form of a dance ballet.

Conceptualised, choreographed and crafted by Hamsa Venkat, Abhijnana Shakuntalam was presented by the Samskriti School of Dance in support of charity organisation Vision 2020’s 23rd project. The Sydney-based social enterprise is raising funds this year for Rehoboth, a charity that rehabilitates destitute women with mental health conditions in rural Tamil Nadu, India. Combining the powerful forces of culture and cause together, the production sought to aid Rehoboth’s housing construction project entitled ‘Kudumbam’ through the medium of dance.

In Kalidasa’s epic, love and longing, both integral facets of the human experience, are elucidated. In its most recent Bharatanatyam version, the choreography was executed skilfully by the dancers who showcased the three key elements of the dance form: nritta (pure dance), nrittya (rhythm with expression) and natya (dramatics) with grace.

What made Abhijnana Shakuntalam particularly enjoyable, was the eloquently detailed voiceover description that provided additional clarity to the plot of the play, illuminating the upcoming dance items for the audience.

Some spectacular dance numbers made up the entire production,inventively choreographed with effective use of space and incorporatingvarying formations. During a chase sequence when King Dushyanta pursues a deer, the predator-prey dynamic was exhibited through striking floor spins and leaps as the circle expanded and contracted, increasing the dramatic tension with the rhythm of the music changing from fast to slow and to fast again.

Another instance of a theatrical treat came in the form of a powerful dance duet by Shakuntala (Sowmya Sriram) and King Dushyanta (Govind Pillai) as they expressed their all-consuming love for each other. It showcased symmetry and was performed in unison as the characters experienced the fiery throes of passion. The duet culminated in a stunning embrace where Shakuntala and King Dushyanta united, a truly brilliant visual spectacle.

Incorporating folk dance pieces into the choreography of the play piqued the audience’s interest post-interval as the dancers adeptly carried out the steps with the accompanying stage props.

The range of emotions that their characters experienced were expertly conveyed through exceptional facial expression work by the dancers. This was evident in King Dushyanta’s slow realisation of the truth and subsequent palpable anguish, Shakuntala’s wistful reverie longing for her love, her devastation in the face of Dushyant’s rejection, Bharata’s playful displays of bravery and fearlessness (in a stunning cameo by the young Vishakha Iyer), the confrontation between guards and fishermen and the maidens’ genuine concern for their friend.

Melodious music compositions complemented the dance on stage, and the vividly elegant costumes enhanced the aesthetic quality of the production.

“Since we had to construct a musical from scratch with only Kalidasa’s verses, it was a mammoth task but an enriching one,” director Hamsa Venkat told Indian Link. “Vocalists Sai Vigneshwar and Namrata Pulapaka tuned all the Sanskrit verses, Mohan Ayyar composed the interludes and we used pre-existing folk pieces. Much discussion went into choosing the ragas and melodies. The scene where Shakuntala, devastated, moves like a living corpse, dead to the world. I could see this movement of the dancer in my head and explained it to Namrata who sang it in a soulful manner, staggering the words that gave it an effect of listlessness. Every time I watched that scene during rehearsals, I had tears in my eyes. Many in the audience admitted to a similar reaction.”

With core members placed far and wide – India, Singapore, Sydney and Melbourne – technology helped hugely, especially with rehearsals on Skype. “Being busy full-time professionals I think it is commendable that all my dancers put in so much commitment into making this happen. Sowmya works in a senior managerial capacity with Swiss Re, Govind is a senior professional at Ernst and Young in Melbourne, and so are all my other core dancers. It is wonderful that we are able to come together through dance when everything just fades to the background and it is just us and our art.”

She concluded, “Much research went into the production as there was the responsibility of staging a text of epic proportions which is impossible to do justice to in a span of two hours. If there is one thing I wanted, it was for the audience to walk out having experienced the love and loss of Shakuntala.”

In that, her efforts have been successful.