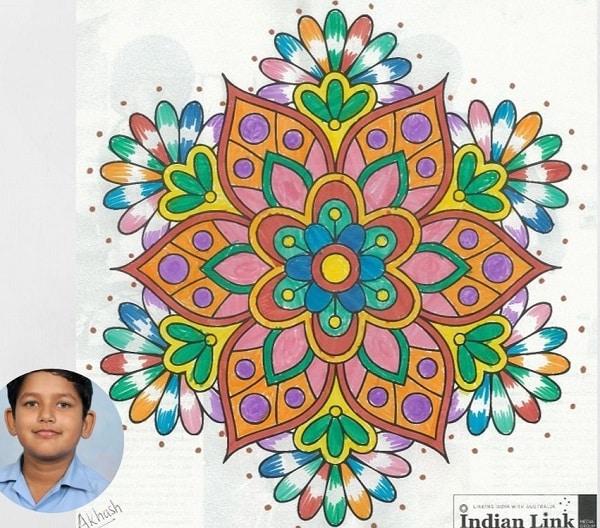 Maanvi Dayal, 7, of The Ponds has won the prize in her age category, Upto 7 years.

Both young artists take home book vouchers to the value of $75 each. Additionally, Akhash’s work will be featured on Indian Link’s annual Diwali card for 2019.

Avika Gurram, 10, of Holsworthy and Saanvi , 7 of Ryde were adjudged Runners-Up in their age categories.  They win book vouchers valued at $50 each.

“I didn’t think I would win, so I was very excited to learn I was in the Top Ten, and really thrilled when I heard I had won,” Akhash told Indian Link.

His piece, bright and lively, impressed with its technique, choice of complementary colours and neatness of execution. The rangoli dots are a nod to his Indian heritage, and the floral quality a reflection of the spring season right here in NSW.  Overall, it’s a pleasing mandala, joyous and festive, with a unique Diwali vibe – a spring-time Diwali in Australia.

“My grandma who’s visiting, saw it in the newspaper and asked if I would like to enter,” Akhash revealed. “When I started the artwork she guided me.”

Karthikeyan, Akhash’s dad, chimed in, “Mum has dabbled in art herself so she’s a great influence on the kids. She has made a few canvasses but her real forte is rangoli. It’s a lifelong passion at which she’s very highly skilled, having done some very large works as well as the daily ones at home as part of her routine.”

Now we know where the rangoli dots in Akhash’s prize-winning work came from.

His favourite subject at school is art, one of his favourite school projects being the painting of a real surfboard.

“I also like reading, writing and craft,” he said.

What’s his favourite thing about Diwali?

“The lights and the firecrackers.”

Akhash spent a month in India last year during Diwali and got a first-hand feel of the Festival of Lights.

“Yes, we took him out of school for a month,” dad Karthikeyan said. “We came to Australia when he was four, and obviously he didn’t remember anything about Diwali. And so we thought he should experience it at our hometown Chennai.”

Congratulations to all the budding artists who entered this year’s Indian Link Diwali Art Contest: 152 submissions came in from all across Australia, many from children not of Indian origin.

For the first time this year, Indian Link saw group submissions from art schools and language schools, indicating the rise of community-level service providers for children.