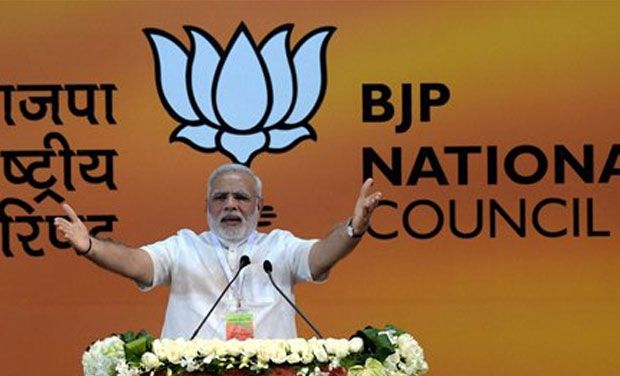 The BJP’s upward mobility last year was confirmed when the alliance led by it secured a majority in the Jharkhand assembly, and the party put up its best ever show in J&K.

But there is a hint in both the elections that the party’s ascent may not continue to be as smooth and effortless in 2015 as it has been in 2014.

In Jharkhand, for instance, the BJP could cross the half-way mark in the 81-member legislature only with the help of its ally, the All Jharkhand Students Union, which added five seats to the BJP’s tally of 37.

What is more, the BJP’s victory rath (chariot) came to a halt outside the Muslim-dominated Kashmir valley, showing that it is only the party’s vote bank of the Hindus of Jammu who supported it while the Muslims gave it a wide berth, since the BJP could secure only 2.2 percent of the votes in the valley.

The reason for the rebuff by the minorities is clear enough. They are angered and disheartened by the aggressive anti-Muslim and anti-Christian campaigns of the Hindu supremacist RSS and its rabid affiliates like the Vishwa Hindu Parishad (VHP) and the Bajrang Dal.

These fundamentalist outfits have seen the BJP’s rise to power at the centre as the most opportune time to push their fascistic idea of converting secular India into a theocratic Hindu rashtra (nation). There is little doubt that if Narendra Modi is unable to rein in the Hindutva Gestapo, then his memorable victory in the general election will begin to unravel.

While the BJP’s success story can be said to be continuing, its main adversary, the Congress, is going steadily downhill and has now reached a stage when its revival seems to be nearly impossible. The reason is its inept leadership: both Sonia and Rahul Gandhi lack political charisma (which used to be the Nehru-Gandhi family’s forte), intellectual acuity and an economic vision in sync with the modern world which has lost patience with socialism, which the Gandhis seem to prefer.

As a result, the Congress has lost virtually all the major elections for more than a year while the BJP has forged ahead. Only in several by-elections, notably in Rajasthan and, surprisingly, in Gujarat has the Congress fared well but they have been too few and far between to rejuvenate the party.

In contrast, Modi has all the requisites of a winner – charisma, oratory, a forward-looking economic agenda and administrative acumen with a hands-on approach. But his Achilles heel comes from the RSS, VHP and other Hindu militant groups like the Dharma Jagran Samiti, which has been organising the proselytizing ghar wapasi (homecoming) campaigns to woo the minorities back into the Hindu fold.

Modi is not unaware of what’s hobbling him. But, in a way, he is helpless because having spent all his life in the fundamentalist environment of the RSS shakhas and among its karyakartas (workers) – Modi himself was once a pracharak (preacher) – it must now be difficult for him to turn against them.

Although he has partially succeeded in taming the hardliners by persuading them to put off the issue of constructing the Ram temple by a year, in keeping with his Independence Day call for a moratorium on sectarian animosity, he doesn’t seem to have reckoned with the penchant of the extremists to conceive of one divisive idea after another – love jehad, ghar wapsi, bahu lao-beti bachao and so on.

As a result of the xenophobia propagated by the votaries of Hindutva with claims that India exploded an atomic bomb in prehistoric times, as stated by Ramesh Pokhriyal Nishank, MP, and invented plastic surgery – an assertion made by Modi himself – India is passing through a surreal atmosphere where a pro-market economy reflected by the glittering malls and multiplexes is coexisting with articulations redolent of an unscientific and unsophisticated worldview.

This contrast is also evident in the government-forming negotiations between the BJP and Muslim-majority parties of the Kashmir valley like the People’s Democratic Party and the National Conference, which the saffron hawks regard as pro-separatist and, therefore, anti-national.

Unless Modi can resolve these contradictions between a 21st century government and the Hindutva radicals by coming down heavily on the latter and resolutely pursuing economic reforms, the earlier optimism associated with him will disappear.

The gainer will be the opposition parties, whose stalling of parliament over the antics of the saffron activists compelled Modi to take the ordinance route to pass crucial pro-reforms laws. But such bull-dozing tactics are a sign of the prime minister’s, and the democratic system’s, failure.

If Modi nevertheless opted for them, it was to divert attention from the Hindutva fanatics. He will have to pursue the economic reforms – the road to middle class hearts – even more energetically if the BJP fails to stave off the Aam Admi Party’s (AAP) challenge in the Delhi elections, likely to be held in February.

Modi will have to confront the saffron brigade head-on in a face-off reminiscent of Hitler’s night of the knives.

Kashmir… from conflict to calamity

FIFA corruption affects us all