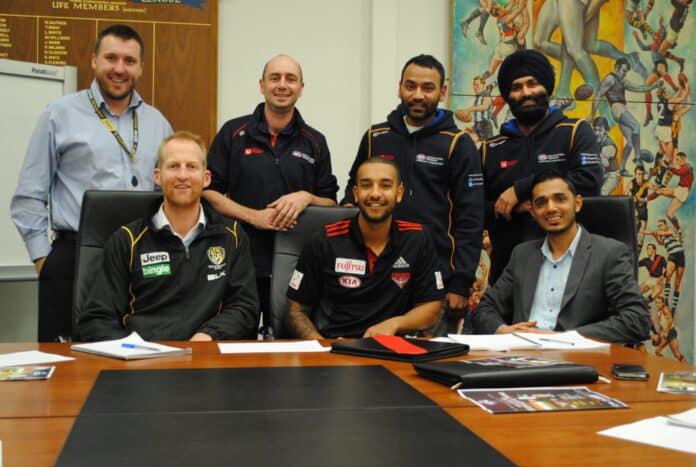 The world media giant CNN in 2013 released what they considered the world’s nine greatest rivalries. Rating right up there in that select group was the India and Pakistani ‘geopolitical athletic’ rivalry.

Surprisingly, but entirely understandable as well, also rating on that list was the Melbourne and Sydney ‘Top City’ rivalry.

And if you were to rate any rivalry in that list from Australian Rules Football, you might think of the ‘Collingwood and Essendon’ rivalry, and as a Collingwood supporter growing up in Essendon, I definitely understand this one.

Is it possible though that these rivalries could be trumped with a bigger one, by the Dosti Cup? An International Australian Rules Football Cup, India v Pakistan, a possible must do annual tradition?

Like many others, I love a bit of rivalry. It was instilled in me from birth. Along with being given a name, I was also ‘christened’ the same day with my football team.

Growing up, my biggest rival was my best friend. We had a love hate relationship, as she barracked for my least favourite team. However our opposing football allegiances actually made us closer, and to this day we are still best friends. Every year we both dread and at the same time are excited by that match, when our teams go to battle. Regardless of the standings of either of our teams, year after year, that match brings the adrenalin rush of a Grand Final and a do-or-die determination from the players. At the final siren you are either heart broken, or on cloud nine. When her team beats mine, we still go to the pub on the corner, and I might drown my sorrows and trash on the umpires, and she’ll sing the team song again and toast to all the awesome plays.

That’s my experience, but I’ve heard that the sporting rivalry between India and Pakistan is in another league altogether. Two countries where there is not a pub on every corner but a temple and where footy is not the unifying religion, cricket is. I’m not sure that after a match you would see India and Pakistan rivals heading down to the local temple together, one to give thanks for the win, and the other to pray for redemption. I’m not sure there would be any sharing of camps at all!

The rivalry has a lot to do with a number of devastating events shared in their past. It includes four wars, numerous terrorist attacks, and displacement of millions upon millions of innocent people from both countries alike.

Even as I write this, the news is that the latest round of peace talks have hit a stumbling block and have been called off.

It makes me wonder how healthy is this rivalry, especially with regard to their beloved game of cricket.

Sport can be unifying, competing under a set of rules on a level playing field, holding up the ideals of sport, respectful of the differences from where your opponent has come from in order to be able to meet you there on that field. When it comes to Pakistan and India though, along with all these important reasons for pursuing a rivalry, there must be in there something else incredibly significant, because only one thing has ever been able to put a stop to a cricket clash between the two countries, and that is the event of a real clash itself; during the wars between the two countries of 1947, 1965 and 1971 and also following on from the Mumbai terrorist attack of 2008.

So much trauma has been shared by the two countries since Britain withdrew in 1947. When Pakistan and India became independent states, Kashmir, being a princely state was caught in between, free to join with either state, or remain a separate entity. Geo-politicking, mismanagement, miscommunication, misinterpretation, misunderstandings, greed, pride, ego, loss of trust, desperation, survival, love and compassion are all elements that played roles in the countries’ shared journey since then.

These Pakistan V India sporting matches may hold a unique significance over and above rivalries seen between other countries. Behind this rivalry are memories and a great deal of emotion. The intense rivalry could the result of a united expression of anger and pain from their shared past and losses, and the match itself just an outlet for this.

Pakistan and India, over a billion people, individuals and societies, traumatised by past events, have learned to put barriers up, learned to build arms for protection, learned to mistrust, and have yet to get over that hurdle to move forward, working out how to listen and feel and ultimately understand and forgive to let go and move on to a positive future.

Healing takes time, and mourning is part of that healing. If sport aids in that progression between rivals, if it enables you to connect with people and communities, to build understanding, and respect, and peace, if it empowers you, motivates or inspires you, relaxes you, or makes you smile, it has served a worthwhile purpose.

The Australian Football League understands the concept of being a good sport. It is using practical programs with sport to educate about human rights principles and mutual respect, and showing how through sport these ideas can be brought to the world.

Brett Kirk, AFL International Ambassador and inspirational Swans player, spent a year travelling around the globe in efforts to do just that. He travelled to 23 different countries and cultures and customs, sharing many laughs and smiles, teaching and playing AFL, and supporting ventures in making International AFL possible. Brett’s adventure has been documented in a film that has just premiered in some cities, and is about to premiere in others around the country, to be shown at selected cinemas. The doco Aussie Rules the World stars many of the teams featuring in this year’s International AFL Cup competition, including players from India.

This year’s Indian International Australian Rules Football team is an exciting colourful mix of men from all over the country. Not all players speak the same language, each has a different background; all are thrown together to represent their country and to play men just like them, from all ranges of backgrounds and experience.

Professor Mick Dodson, co-chair of Reconciliation Australia, back in 2009 spoke about sport and AFL: “It doesn’t matter what your background is, your cultural upbringing, your language or colour or religion, or even who you barrack for. Everyone on the field is worthy of being there. Everybody is respected. Differences in culture or background fade into the turf, as it were. Success hinges on respectful relationships and relying on your team mates. Everybody has to help each other. Otherwise teams don’t work”.

These ideals of sport are in such stark contrast to the model of so many people’s lives, and because of this, the platform of sport has time and time again highlighted these major contrasts. And because sport is so universally loved, it can be a very effective social and political platform to make a statement.

For example, Jesse Owens’ win at the 1936 Berlin Olympics, challenged and weakened Adolf Hitler’s glorification of Nazism and white supremacy.

In the 1968 Olympics, the African American sprinters highlighted civil rights abuses in the USA, by the symbol of their gloved fists to the air.

In the 1980s, the many boycotts of sporting events, played a significant role in ending apartheid in South Africa.

In 1993, Nicky Winmar of St Kilda AFL football club, made a powerful stand against racial taunts, by pointing to his skin as he was cussed at by Collingwood fans in the crowd.

In 2008, the Australian Football League with the help of the Pares Centre of Peace in Israel put together a ‘Peace Team’ to compete in that year’s AFL International Cup amid slander from their home nations. The Peace Team was made up of Palestinian and Israeli men.

In 2014, numerous athletes attended the Sochi Winter Olympics as openly gay and aware of the warnings of Russia’s anti-gay legislation, a clear violation of the Olympic charter.

And in 2014 India met Pakistan in the International Australian Rules Football Cup in Melbourne for the ‘Dosti Cup’ an encouraging, peaceful, respectful, friendly, healing match.