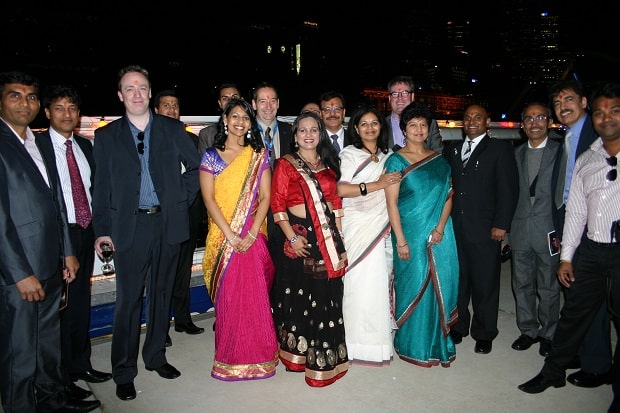 The festival of light kicks off in Melbourne in Fed Square

It is going to be Har Din Diwali* in Melbourne for the next few weeks, with multiple celebrations of the festival of light being held in various parts of the most livable city in the world. With each year the Diwali festivities around our city are getting bigger, better and more creative as many organisations are jumping on the bandwagon to host the celebrations. Most prominent amongst the Melbourne Diwali events is the cultural extravaganza held at Federation Square by Celebrate India Inc. Again this year thousands of people are expected to attend this popular festival that is scheduled to run from 21-26th October.
An innovative launch, held on 18th October, kicked off Celebrate India’s mega celebration for 2013. A select group of guests comprised mainly of festival sponsors, partners and dignitaries were invited to enjoy a leisurely cruise on the Yarra followed by a sumptuous dinner. While the guests could watch the city lights as they cruised down the Yarra, many people in the city would not have missed the beautifully illuminated boat announcing the forthcoming celebrations.
Celebrate India Inc. is a not for profit Victorian Organisation that was created in 2006 with the idea of sharing the vibrant culture of India with the wider community of Victoria. The dedicated team of volunteers from Celebrate India, led by Arun and Jaya Sharma, has been celebrating Diwali in the heart of Melbourne since its inception. The event created history by getting permission to illuminate major landmarks and iconic buildings in Melbourne for the first time ever for an Indian festival.
Arun Sharma one of the founding members and chairman of Celebrate India Inc. shared the joy and meaning of Diwali in his welcome speech during the recent launch. “Diwali is celebrated with illumination that is symbolic of victory of light over darkness or good over evil,” said Arun. “Our team has worked collectively to organise this inspirational and entertaining Diwali and it is our privilege to be able to spread the message of friendship, harmony and goodwill to the wider community in Victoria”.
With the support of the Victorian and Indian Government, as well as sponsors, the festival promises to offer enjoyment for the whole family and will be jam packed with activities. Leading up to the main event on October 26, free Bollywood movies will be screened for five days at Fed Square and a horse drawn carriage will immerse the city in the spirit of Diwali. The main event will be a day long celebration where the Federation Square will be transformed with light displays, food stalls, dance, music, arts and craft followed by a fireworks display. Celebrate India has also partnered with the White Ribbon organisation and they will be spreading the message of ‘No Violence Against Women’ by conducting oath taking ceremonies and raising funds during the main event.
During the launch of the festival the audience also heard from Chin Tan, Chairperson of The Victorian Multicultural Commission and Jude Perera, State Member for Cranbourne. Both speakers commended Celebrate India for their efforts in organising this major festival and for putting Diwali celebrations on Melbourne’s cultural calendar. They invited the community to participate in the festival and wished everyone a joyous Diwali.
Nirmal Choudhary, Acting Consul general of India in Melbourne and Rakesh Kawra Consul (SCWO) launched a souvenir during the boat cruise launch that provided details of all the activities and acknowledged the sponsors of the festival. Sponsors include Melbourne Airport, SBS radio, Air India, Fed Square, Telstra, Mind Blowing Films, White Ribbon, Metro, Fiji Hindu Foundation, Maharajah’s Choice, RACV, Richmond Football Club, Gaura Travel, Cricket Victoria, City West Water, Sweetmix Roadshow and Minuteman Press Narre Warren. Indian Sun is the Victorian Media Sponsor and Indian Link is the National Media Sponsor of the event.