A round-up of new shows to catch this June. 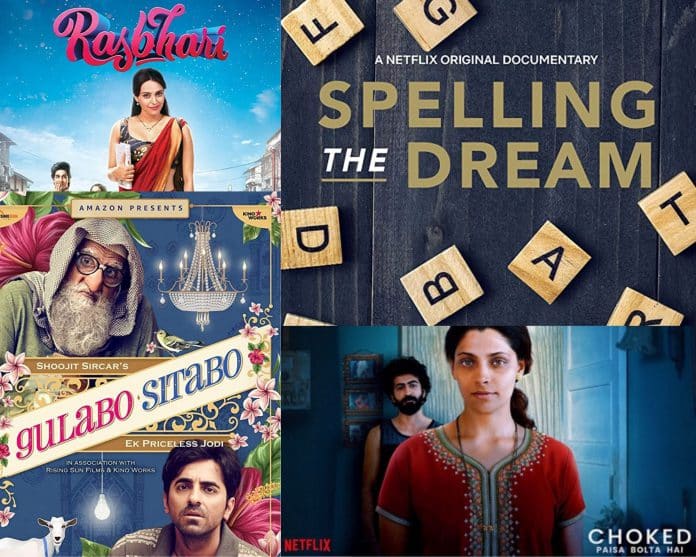 This upcoming Netflix documentary thrusts you into the world of the Scripps National Spelling Bee, a national competition which has been won by an Indian-American competitor for the past 12 years straight. Tracing the journey of four hopefuls in the biggest spelling contest in the US, Spelling the Dream looks at what this winning streak means for the Indian diaspora. It includes commentary from the 1999 winner Nupur Lala and Indian-American comedian Hari Kondabolu.

This upcoming film marks Anurag Kashyag’s fourth collaboration with Netflix after Lust Stories, Ghost Stories, and the successful Sacred Games. In Choked, Saiyami Kher plays an overworked bank employee buried under debt because of her husband (played Roshan Matthew), until she finds huge wads of cash flowing out of her kitchen sink. And then, demonetisation strikes.

You can catch the film on 5 June.

Because this much-awaited quirky comedy couldn’t have a theatrical release due to the pandemic, Shoojit Sircar’s newest film will be available online after an aggressive acquisition by Amazon Prime. Starring Amitabh Bachchan as an elderly landlord at odds with his young tenant Ayushmann Khurrana, Gulabo Sitabo’s cast is rounded off with the talented Vijay Raaz (of Gully Boy and Made in Heaven fame) and Brijendra Kala.

The film is available for streaming from 12 June.

This film is the brainchild of Shantanu Shrivastava, one of the writers of the unconventional comedy Badhai Ho. Set in Meerut, Rasbhari is about a high school boy’s fascination with his English teacher (played by the feisty Swara Bhaskar) and the teacher’s sex-obsessed alter ego called Rasbhari. Ayushmann Saxena (from Bombay Talkies) stars as the young boy Nand, joined by Rashmi Agdekar, Neelu Kohli, and Pradyuman Singh.

Rasbhari is set to premiere on Amazon Prime on 19 June.