Falling into Ramesh Nithiyendran’s ‘outstretched arms’ at the Archibald 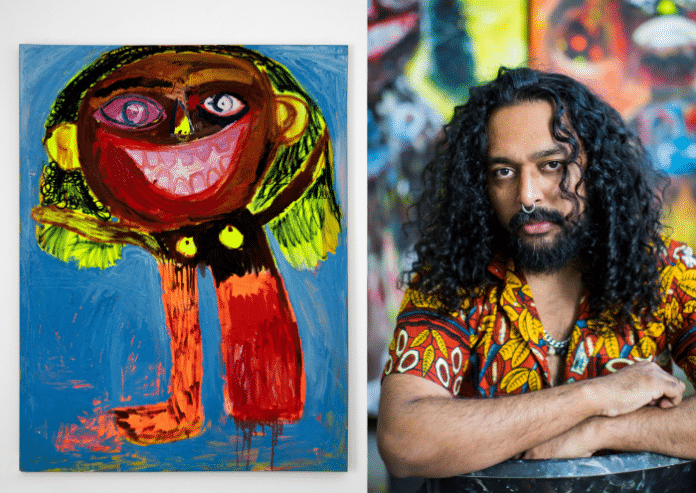 The Art Gallery of New South Wales (AGNSW) announced Ramesh Nithiyendran’s self-portrait called “Self-portrait with outstretched arms” as a finalist for this year’s Archibald Prize. The portrait is quite unique, to say the least.

Almost immediately, the painting forces a smile to creep up on the beholder’s visage and prolongs that first glance into a gleeful gawk.

“It’s a self-portrait that I wanted to be this kind of joyous, vibrant thing that was mediated and translated from some quick drawings in my diary,” Ramesh revealed to Indian Link.

It is the cheerful child-like sentiment that grabs you at once, in what is clearly a skilled work of art.

“I think the style harks back to drawing and scribbling in younger years, on the other hand, it’s also upscale and uses materials children probably would not use!” Ramesh chuckled.

“So I think I try to have a playful, democratic style in that respect,” he added.

He painted the self-portrait in his Rydalmere studio in Western Sydney. The large-scale portrait is almost 2 metres in height and 153 cm wide.

This is not the first time a self-portrait by Ramesh has made it to the Archibald. Last year, another one of his self-portraits was also shortlisted for the prestigious prize.

Ramesh also confesses that he is “more expressive or liberal or creative” when working with imagery of himself as opposed to the worries that accompany the process of capturing someone else’s likeness.

“When you’re working with yourself as an image you kind of get to bypass a lot of the ethical considerations. In some way, I’m only held accountable to myself.”

READ ALSO: L-FRESH The LION at the Archibald

The artist’s alluring artworks reference multiple subjects. Whether it is the physical body, gender, culture, religions, ancient history or modern life, Ramesh says all these references “co-mingle” in his work.

“Some references are cultural or historical but some are also pop-cultural and from daily life. Within my work, I try and reflect contemporary life which is about the layering of different experiences, meanings, symbols and history.”

Ramesh’s medium of choice is primarily clay and ceramics which he says is central to his vernacular now. His reason for it is a glorious link to the people that have been “working with clay for thousands and thousands of years to represent figures” and being able to “connect with all those different histories through time”.

Ramesh Nithiyendran is also concerned with plurality and multiplicity. Traditionally, religious idols and deities are sculpted to embody divinity and perfection; he explains how his cultural interpretations are influenced by depictions of Hindu gods and goddesses.

“In lots of mythologies and depictions in Hinduism, there’s a sense of ‘the multiple’. It’s often multiple forms, individuals and deities co-mingling. Even though, for example, the Hindu representations are incredibly smooth and clean they’re also generally poly-chromatic. The colour schemes are intriguing. The design element, there’s a lot of symmetry and consideration in there, a lot of complexity as well, which is what I find interesting as an artist.

“I think in our world right now, the favouring of multiplicity is very important,” he added.

When it comes to interpretations of his work, Ramesh has experienced Eurocentric analyses of his work. This is where he says art education might have failed in some way. Nevertheless, he also suggests that times are a-changing and people are increasingly acknowledging the concept of global cultures.

“Sadly, Australia sometimes is seen by people as some kind of colonial outpost, as this kind of western nation. Art education has failed in decentering Eurocentric narratives. The favouring of modernism as a core in art history teaching could be de-centred and globalised for example and that would actually create a bit more literacy.

“But in the last few years especially, I’ve noticed people and the industry becoming a lot more literate with the very idea of global cultures rather than the East and West binary,” he favourably mentioned to Indian Link.

While Ramesh Nithiyendran is not concerned with dictating how audiences perceive his work, he does want it to deeply engage them.

“I think there are multiple ways to read art and respond to art and they’re all valid, however, I do want it to feel immersive, colourful, textural and tactile.”

In an environment where public discourse is becoming critical of monocultural depictions of Australia and Australian life, Ramesh identifies himself as a Tamil-Australian and acknowledges the recognition he has received as a contribution to the broadening of the perceptions and narratives of Australia.

“When I think of being of Tamil heritage and being well-known in Australia as an artist, it is somewhat political. There aren’t many Tamil-Australian artists showing in these kinds of exhibitions. Even though it’s not my decision, I’m inadvertently representing my community in that way,” he mentioned.

The Sydney-based artist also has an upcoming major project opening soon at the AGNSW in November which is also about portraiture and figuration.