A scientist, academic, writer and Isaac Newton fan presents his newest book to Woolsthorpe Manor – and makes a heart-warming discovery of his own 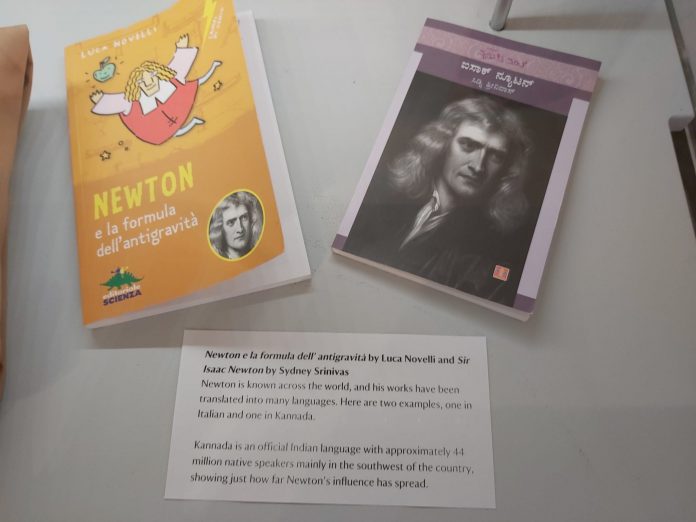 I love exploring Europe where every step has history. In London, Paris and Vienna I have visited memorials to scientists, poets and thinkers. Just  before lockdown this year, I had the opportunity to visit Woolsthorpe Manor, the birthplace of Isaac Newton.

My wife Usha and I hopped on to a train to Grantham (the constituency of ex-Prime Minister Margaret Thatcher), some 160 kilometres from London. A 20-minute cab ride from there brought us to Woolsthorpe Manor. The house is set in a typical English village with around twenty other houses.

This was not just the birthplace of Newton, born here in 1842. This was the place where gravity, the structure of white light, and calculus were born.

His mother wished that he would continue to stay on and look after the family estate, but he ignored her wishes and joined Trinity College in Cambridge. Soon after, the plague broke out and schools and colleges were closed. Newton had to return home.

He could have spent his days without a care in the world; the family was quite rich. However, he chose to pursue his interest in mathematics and physics.  He dwelled on gravity and consolidated his views. He placed a prism in the path of light entering a window, discovering that it dispersed into seven colours. Then he placed an inverted prism across the dispersed light and confirmed that the seven colours unite to give white light. This was one of the earliest experiments carried out in optics. Further, he invented calculus which has become an essential tool for scientists and engineers.

All these within this building and those two years he called his ‘Annus Mirabilis’ or miraculous years (1665 – 67). He was not yet 30.

After the plague subsided, he returned to Cambridge.

Today, Woolsthorpe Manor has become a museum managed by the UK National Trust.

While there, I presented to the museum my latest book on the accomplished scientist, Isaac Newton (Prism Books, 2017). The staff gathered for the occasion and were excited to run through its pages.

I remarked that I had presented another book to the museum in the past, a Kannada book entitled Sir Isaac Newton (Vasantha Prakashana, 2014). On hearing this, a staff member led me upstairs. On the top-right corner of a large table on display was a copy of my book. It has been preserved with other material with a glass cover on top.

Nothing can make an author happier. I was elated – my book is exhibited at the birthplace of Newton!

On a tour of the museum, we were taken to every room in the house. On the ground floor is simply a kitchen with a dining table and utensils of the time. The first floor is where the scientific breakthroughs were made. You’ll find Newton’s study here, with papers scattered over the table, a jacket hung on the chair, and the telescope he built better than Galileo before him.

In the next room, on a table with lenses and prisms, is where Newton conducted his experiments on light.

His adjacent bedroom has a broad bed, white sheets, a jug on the side-table and, of course, his books and research. In this room, you can see Newton’s walking stick and a lock of his hair.

The famous apple tree is just outside the house. As the tale goes, this is the place where an apple falling on his head led to Newton’s discovery of gravity and changed the path of science. (Of course, this tale is dismissed by experts today, who say that he had been pondering over gravity much before an apple fell on his head.)

The tree has undergone many changes. It has decayed, split, regrown, and made way for thousands of souvenirs all over the world. In 2010, a small chunk of the tree was sent to outer space to allow it to experience zero gravity.

In an adjacent building, filled with school students, there is a facility to perform experiments to understand Newton’s laws of motion. There are ample demonstrations to appreciate his theory of light and gravity.

What a day it was! On the way back home, after a fascinating day of re-discovering Newton at his birthplace, I couldn’t help but consider myself lucky, having visited places connected to some of our most brilliant minds – Newton, Darwin, Shakespeare, Wordsworth, Einstein, Sigmund Freud.