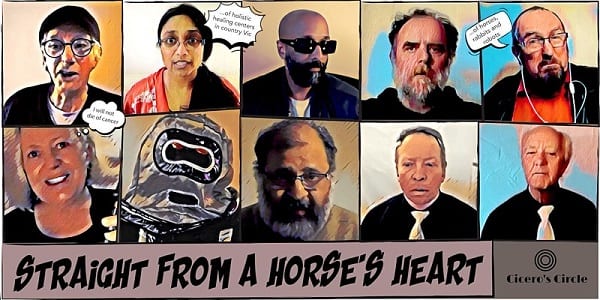 “Please switch off your cameras, your phones and put yourself on speaker view, not gallery view,” announced Arjun Raina, sutradhaar (narrator) of his newest Zoom play Straight From a Horse’s Heart.

During the pandemic and the subsequent lockdowns, this theatre crew looked at adversity in the face and adapted to the circumstances.

Tickets to this unique play arrive in the form of a link to a Zoom meeting, where all the audiences have switched off their cameras, muted themselves and allowed the host to take the wheel.

Straight From a Horse’s Heart: a Zoom play features eccentric and kooky characters that entertain you from the very beginning. Set in regional Victoria, the play takes place in a holistic healing centre run by Victoria Shaw, a wealthy and narcissistic woman. She has employed Paro, a robotic nurse, to run the centre and take care of residents.

Addressing the elephant in the room, one might think Paro is a modern robotic version of Paro from Devdas, where a woman is seen nursing an addict back to good health. In actuality, the name is stereotypically Punjabi, and a reference to the army of migrant nurses belonging to that background working in the aged care sector.

Guilt, deception, and illegal immigration – you identify each of these and more in Straight From a Horse’s Heart all while holding back your peals of laughter. There also some contemporary political and social references in the script that provide much value-add.

You would think that these would be revealed ‘straight from a horse’s mouth’, but it is Andy, the dressage-obsessed resident holding some pretty dark secrets, that brings home the message in this play.

From a nutty cancer patient to a drunken ridder of rabbits, from a scheming property-developer son to a couple of funeral cover insurance jokers, the story brings together an assortment of characters with different backgrounds and motivations. The many dynamics and more than one plotline might seem confusing, but you must trust the ending.

The play was written in 2013 but never performed. While it does not mention the pandemic, the parallel issues of separation and aged care are unmistakably relevant. Featuring characters living in a healing centre, the play does the work of letting you empathise with the patients.

Actors include Dipanjali Rao as Paro, Scott Welsh as Andy, Cherian Jacob as Mr X, Alison Richards as Victoria Shaw, Lawrie O’Dwyer as Jon Shaw, Peter Fernon as the Rabbit-ridder, and Team Henderson and Michael Camplin as detectives who also performed live music for the play.

In the best way, Straight from a Horse’s Heart is that insightful and amusing distraction from the realities of a COVID-ridden world.

Arjun Raina, the writer, director and producer of the play, disclosed to Indian Link that the plan was to practice during lockdown and perform at venues once the lockdown lifted. A virtual Zoom play was the last thing on his mind.

“By the second lockdown, we realized we would have to go digital,” he said.

Raina also adds that the actors have never met each other in person; there was no audition process, and that the motivation behind a virtual play came from open readings conducted over Zoom where it garnered a positive response from viewers in India and Australia.

“So, we thought ‘yes, the story resonates with the time’. All of us initially thought that we are real performers for live theatre and we shouldn’t get into this Zoom business; but suddenly, we were sucked in and with great excitement, we have worked towards it. The play is not written for Zoom, but it has been adapted for it.”

He mentioned, “We’ve all devised and learnt how to do an exit, an entry, a monologue, put it on speaker view, how to do it with two or three people at the same time. It’s been a quite an exciting learning curve”.

Raina has taught at the National School of Drama in New Delhi, India. His past students in India include prominent actors like Nawazuddin Siddiqui and Adil Hussain. He is also a Kathakali dancer with a PhD in teaching the traditional South Indian dance form to contemporary performers in Australia.

A connoisseur of solo plays, this is Arjun Raina’s first time directing a mixed cast of Indians and Australians. The process is not so simple, he revealed that it was difficult and had to be handled delicately. Yet, it was the passion of the thespians that made it a doable job for him.

“A person of colour directing a mixed group is not easy, there is white fragility. But, everybody loved the writing and their parts, and eventually intercultural exercises are best served by acts of love. Reminding ourselves that we’re doing something we love – that helped soothe egos.”

Staging a 70-minute drama where you can only see the actors from chest-up and no physical interaction sounds limiting. But, this production, with its live music, sound effects, appropriate exits and entries, immersive acting and a friendly narrator to take you through it all, does it effectively.

Straight From a Horse’s Heart will be performed every night 9 to 10:15 pm until Sunday 18 October.