From The Kashmir Files and RRR to Bridgerton and Bachchhan Pandey - all the best Indian films and series hitting screens this month. 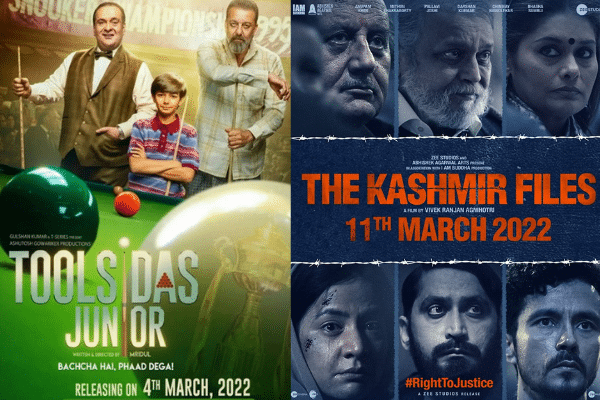 Our pick of all the Indian films and series releasing in March 2022. There’s entertainment galore this month!

The Kashmir Files tells the story of the exodus of Kashmiri Hindus in the early 1990s due to the insurgency in the state.

Following the success of The Tashkent Files, filmmaker Vivek Agnihotri wrote this film after extensive research, including interviews of those who fled. Some of these video interviews made it into the final cut.

This SS Rajamouli film will finally see the light of day, following multiple postponements thanks to COVID.

The Telugu-language period film is a fictional story about two Indian revolutionaries, Alluri Sitarama Raju (Ram Charan) and Komaram Bheem (NT Rama Rao Jr), who fought against the British and the Nizam of Hyderabad respectively.

We can’t wait to go back to 1814, to get our fix of Regency England and its empire-waist dresses, gossip rags, and societal codes that passed on to India.  This time of course there’s added interest, as we see the Indian-origin Kate Sharma (Simone Ashley) bring “consummate rake” Anthony Bridgerton (Jonathan Bailey) to heel.

The series drops on 25 March.

Adult siblings return to the parental home for Diwali, reuniting after years. They bring with them their emotional baggage –thwarted ambition, challenging current-day responsibilities… and unresolved disputes with each other. Navigating the complex multi-threading of their relationships, they relive the cherished moments of growing up together.

Rudra: The Edge of Darkness (Disney+Hotstar)

If you love psychological crime thrillers then this one’s for you. Channelling Idris Elba in the British TV show Luther (2010-2019), Ajay Devgn plays supercop Rudraveer Singh, out to tame the crime-ridden streets of Mumbai and its maze of psychopathic minds. Esha Deol and Raashi Khanna also star.

A life-altering incident brings together two women from opposite ends of society at crossroads with themselves: one seeks redemption, while the other nurtures a vengeful hatred. Starring here, are two of the most powerful performers in contemporary times, Vidya Balan as a TV journalist, and Shefali Shah as her cook. Suresh Triveni of Tumhari Sulu fame directs. Promises to be a treat.

Dhanush stars as Maaran, an investigative journalist, in this action thriller. He is in trouble because he’s just published an article exposing bitter truths about a corrupt politician. Malavika Mohanan plays fellow journalist and love interest in this Karthik Naren directed film. Maaran is releasing in four languages – Tamil, Telugu, Malayalam and Kannada.

The film releases on 11 March.

Action-comedy is a popular genre in India, especially if Akshay Kumar is starring. This film is about an upcoming filmmaker who is researching a dreaded gangster for a story. But his secret attempts fail when he gets caught for snooping. Kriti Sanon, Jacqueline Fernandez and Arshad Warsi also feature in this remake of Tamil film Jigarthanda (2014) itself a remake of South Korean film A Dirty Carnival (2006).

Look out for this one on 18 March.

Also releasing this March is a sport-based film, this time from the world of snooker. Little Toolsidas Junior (Varun Buddhadev) learns to play the game from the aging Mohammad Salaam (Sanjay Dutt), in order to fulfil the dream of his father Toolsidas (Rajiv Kapoor) who is now no more. The big baddy in the midst of all this is the legend of the game, the westernised and arrogant Jimmy Tandon (Dalip Tahil).  This Ashutosh Gowariker film is bound to draw a bit of attention, given it is the last role of actor Rajiv Kapoor who passed away in Feb 2021.

Yet another sports biopic, this time based on the life of Vijay Barse, the founder of an NGO called Slum Soccer.

A sports coach by profession, Barse invested time and money to train underprivileged kids in football, to keep them away from drugs and crimes seeded in Nagpur’s underbelly. Equally, the backdrop is perfect for deliberation on a variety of societal ills: caste divide, women’s issues, poverty.

That the legendary Amitabh Bachchan takes on the main role, is added attraction in this film written and directed by Nagraj Manjule.

Jhund is set for a 4 March release.

Undekhi 2 revolves around a crime that takes place one night in picturesque Manali, and the cat and mouse chase that ensues post that between the perpetrators and the ones seeking justice. A gripping tale of power, revenge, and love, it features Harsh Chhaya, Surya Sharma, Dibyendu Bhattacharya, Anchal Singh, Apeksha Porwal, and Ankur Rathee, among others.

Undekhi 2 will premiere on March 4.

So we’ve all heard this before: You’re 25 now, we have to think about your future. And Just don’t say anything stupid, ok. From the parents of course, who else. Check out how young Ray (Vihaan Samrat) traverses the path of finding love, with his all-knowing and always-admonishing parents looking on. Jim Sarbh and Rahul Bose also star in this Zoya Akhtar and Farhan Akhtar production.

Be popcorn ready on 18 March.