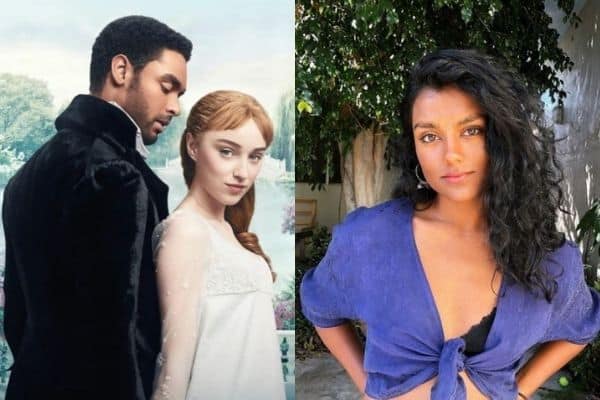 Even as the last episode of Netflix’s Bridgerton wrapped up, its devoted, insatiable viewers were already hitting social media to demand more. Now in an exciting turn of events, their highly anticipated second season is set to include Indian-origin actress Simone Ashley in a pivotal role.

After years of having to claim Apu as the token Indian character until names like Hasan Minhaj, Lilly Singh, and Mindy Kaling came along, Indians can rest easy knowing that pop culture is slowly headed the right way. Seeing South Asian representation on a global streaming platform is thrilling news – and it’s more affirming that it will be on one of Netflix’s biggest shows of all time.

The Twitterverse has, of course, already made their happiness known.

As a darker-skinned British-Indian woman, I’ve grown up watching mainstream media – in both England & India – where the female lead is typically Caucasian or fair-skinned. Seeing #SimoneAshley cast as the lead for Netflix’s biggest grossing show has made me surprisingly emotional

Bridgerton casting Simone Ashley, an amazing brown woman, as the romantic lead on Season 2 of Bridgerton is kinda cute! I can finally be represented in a period piece without the character being a victim of colonization

The fact is, people of colour have existed throughout history, especially in Regency-era London, given old ties with the British Empire. Bridgerton has broken the mould in favouring representation over authenticity, unlike its period dramas counterparts and when season 2 releases, fans will get to happily suspend their disbelief, if only for a short while, to watch Simone Ashley as the fiery Kate Sharma among London’s ton. (A darker-skinned woman romancing the Viscount Anthony Bridgerton? Now that’s enough to make anyone sit up.)

With all these developments, it’s clear that production houses are starting to note the success, both critical and commercial, in translating our multicultural world to the big screen.

Still, it wasn’t until this past year with Never Have I Ever’s Devi Vishwakumar (Maitreyi Ramakrishnan) that we saw an Indian girl as the protagonist of a mainstream show. Earlier this month, comedian Abby Govindan had us all convinced that Golden Globe nominated series Emily in Paris was “originally about an Indian girl” but was rejected by network executives. Consider this: why did we fall for it?

Emily in Paris was originally about an Indian girl who moves to Paris but when I pitched it, the network executives spit in my face and called me racial slurs. The following week I repitched the exact same concept with a white girl and now I’m nominated for two Golden Globes

Fact is, Indians were the world’s largest diaspora in 2020, with about 18 million people born there now living abroad. To depict them now as taxi drivers, convenience store workers, and characters with thick cliched accents, would not only be factually incorrect, it just wouldn’t stick.

Thankfully, there’s been a marked shift in the 21st century. We might still see the occasional South Asian stereotype (think taxi driver Ranjit in How I Met Your Mother) but they’re slowly outweighed by more realistic depictions. Consider New Girl’s Cecelia Parekh (Hannah Simone) and Neighbours’ Dipi Rebecchi (Sharon Johal), who are of Indian origin, but it’s not their entire identity.

When these characters feel like real people who have opinions, flaws, world views, and an existence outside of their cultural background, they have the amazing capacity to question who, or what, others deem ‘being Indian’ to be.

READ ALSO: Patriot Act with Hasan Minhaj has come to an end

Within the entertainment industry, this can mean more meaningful contributions from South Asian actors, directors, writers, and all other creative staff who get to translate their reality onscreen. (In Master of None, an entire episode was devoted to Aziz Ansari’s character Dev, an actor by profession, who refuses to put on an accent in an audition – and subsequently doesn’t get the part.)

Diversity in the media is especially crucial in the case of children, who’ve been exposed to typecast characters for far too long. For first generation immigrants, who continue to grapple with where they are and the culture they come from, normalising the Indian diaspora onscreen can make all the difference. (As for depictions of India in popular culture… well, that’s another conversation in its own right.)

At this stage, it’s fair to say that we’ve got a seat at the table – what are we doing about it?

Every time I watch Queer Eye, I’m so in awe of how brave Tan France is for unapologetically living his truth. We’ve really got a South Asian Muslim guy out here absolutely killing it at what he does, and being happy whilst doing it.

Sydney Film Festival 2021: A treat for our souls