16 new films and series releasing this May

A must-watch compilation of films releasing this May. Get your popcorn ready, we've got your weekend plans sorted! 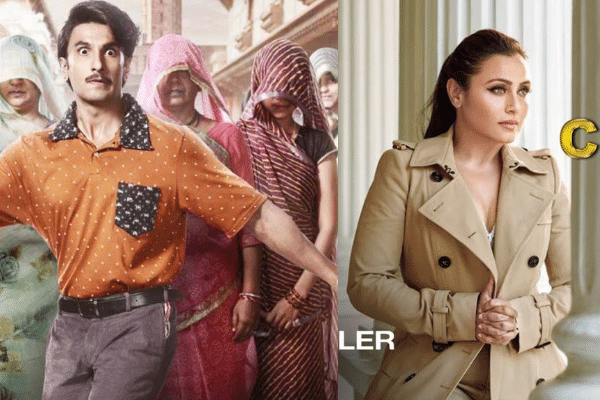 A ‘social comedy’, this is the story of how timid Jayesh turns jordaar. His wife is pregnant with – shock horror – a second daughter, while his political family wants a male heir to continue the line. It is a perfect opportunity for Jayesh to rebel, not only against his feudal dad, but also a patriarchal system that perpetuates antiquated customs. Ranveer Singh stars with Deeksha Joshi.

The film releases on 13 May.

They’re calling it an ‘Indian neo-Western’. There’s plenty of dry landscapes (it’s the desert after all) and horses, and Anil Kapoor and real-life son Harshvardhan manage to look rugged. It’s all dark and gritty, and you can add to that a series of deaths and at least one gruesome torture. Enter a veteran cop (that would be AK), who sees a chance to prove himself. Fatima Sanan Sheikh stars too.

Look out for a 6 May release.

Kangana Ranaut is fierce and tough in real life, so this one would have been a piece of cake for her. She stars as Agent Agni, a fierce and tough international spy in this action thriller.
Guns blaze and swords clash as Kangana takes on woke ‘anti-nationals’ – no sorry, arms and human traffickers. Joined by Arjun Rampal and Divya Dutta and directed by Razneesh Ghai, Kangana’s film aims to be India’s first “female led action thriller”.

Scheduled for a 20 May release.

Fans of Ayushmann Khurrana, get excited, because this one is set out to be a rollercoaster of thrill, action and politics. Ayushman is playing an undercover cop (so you know we are
definitely going to see some action), and in the poster release you can see he’s dressed for the part too. The film is directed by Anubhav Sinha, and highlights a “mission for peace”, the winner being Hindustan – no surprises there. It features beautiful landscapes of the northeast, which is where the film is set.

Look out for its release on 27 May.

It’s back! The awaited sequel of Bhool Bhulaiyya is heralded as a “supernatural horror comedy” starring big names such as Tabu, Kartik Aaryan and Kiara Advani. Anees Bazmee, the director, allayed distressed fans by reporting that even though the popular Akshay Kumar won’t be leading the film, he’ll still have a “special role” in the movie. We’re talking buckets of fun, haunted havelis and a healthy dose of nostalgia. If you didn’t think it could get better, there’s more! The hilarious Rajpal Yadav is coming back in the role of Chota Pandit.

Get ready for an epic horror comedy night on 20 May.

We are living for these comedic masterpieces, and Ankh Micholi looks like it won’t disappoint. Director Umesh Shukla works with Abhimanu Dasani, Mrunal Thakur and Paresh Rawal. The film is centred around a ‘family of misfits‘ (let’s be honest, what family isn’t a little bit weird?), and is said to be the ‘The Most Eye-Conic Wedding Of The Year.’ If you still aren’t convinced to give this comedic gold a shot, then you just need to look at Shukla’s iconic previous films, such as Oh My God and 102 Not Out – he is serious about good comedy!

Get your popcorn ready for the release day on 13 May.

If you need some inspirational feel-good vibes and humour, this one’s for you. The film features the journey of two young friends Ajay and Sameer, engineers by trade. They’re having a hard time to make a name of themselves, but with perseverance and big dreams, they take on rural India and become local legends. The teaser highlights the rolling green countryside and colourful locals where these two use their uni degrees to make an actual difference. It really is a reflection of the dilemmas and contradictions of youth today. It stars Divyendu Sharma, Anupriya Goenka and Anant Vidhaat.

The release date is set to be 6 May.

We are excited for this one, and for good reason. This film follows the journey of two ‘plus-sized’ women in India (who gets to dictate what plus-size is and isn’t anyway?). It is starring a glorious cast with Sonakshi Sinha and Huma Qureshi playing the lead roles. The characters hark from Meerut and New Delhi, and the movie follows the sojourn of two women in India navigating the beauty standards of society. In all cultures there are ways in which we try and standardize beauty and we try and almost tell young young girls, that [if] you don’t adhere to a certain body type, you are not beautiful&quo states Huma Qureshi
when talking about the film.

Release date is unspecified, but it’s expected to come out later this month.

No one does drama, comedy and action all rolled into one like southern cinema, and this Telugu language film is expected to deliver. Mahesh Babu stars as the lead character with Keerthy Suresh, and his fans are eagerly awaiting the release. The film is expected to be a blockbuster hit, which makes sense given the trailer has already touched 30 million views.  The film is about a bank manager who works on behalf of the government to catch a fraudster and bring them to justice, throw in some banging songs, and you’ve got a perfect weekend movie.

The movie is set to release on 12 May.

This touching drama film is said to be based on a true story on human rights and custody. It is a mother’s to fight for her most precious possession ─ her own children. Mrs Chatterjee, the star of the film, is struggling against authorities to have her children back with the added pressures of cultural differences, racism, and mental health stigma. Rani Mukerji as Mrs. Chatterjee is joined by Jason E. Medina and Kristjan Üksküla on screen. It is directed by Ashima Chibber, and written by Sameer Satijia, and Rahul Handa.

Upcoming romance-drama The Conversion takes on a difficult topic: religious conversions for marriages in India. After all, “love jihad” has been widely discussed in the last few years. In this love triangle set in Benaras, Bablu, Dev and Sakshi (played by Prateek Shukla, Ravi Bhatia and Vindhya Tiwari) tackle this controversial topic head on.

The Conversion hits cinemas on 6 May.

This is a story about a reality show where the contestants battle it out on a social media app called Escaype Live –  to win fame and fortune. The participants are content creators who must create the most viral content to win. As the contest heats up, the divide between real and virtual worlds begins to blur…  Jaaved Jaaferi, Shweta Tripathi Sharma and Siddharth star, among others.

The series drops on 20 May.

Filmmaker Arun Matheswaran’s revenge action-drama Saani Kaayidham features Keerthy Suresh and Selvaraghavan in lead roles. Ponni (Suresh) is a police constable who becomes a murderer to take revenge for the injustices done to her. The film boasts Tamil Telugu and Malayalam language versions.

The film began streaming on 6 May.

This Telugu language rom com is a standalone sequel to the 2019 film F2, and the second film in the Fun and Frustration series. Actors Venkatesh, Varun Tej, Tamannaah, and Mehreen Pirzada reprise their roles from the original film.

If you want a break from crime series on your watchlist, try Home Shanti, a ‘slice of life‘ kind of show.

A light-hearted family drama featuring Supriya Pathak and Manoj Pahwa, this is directed by Aakanksha Dua. Follow the trials and tribulations of a Dehradun based middle-class family who are keen to build their dream house, after years of living in government-allocated quarters.

The series started streaming on 6 May.

So you’ve seen and loved Modern Love, based on the weekly column of the same name published by The New York Times. Now try Modern Love Mumbai, in the same genre. This Indian adaptation looks at “love in its multitude of forms – including sexual, romantic, familial, platonic, and self love”. Its eight half-hour episodes are directed by Vishal Bharadwaj, Hansal Mehta, Shonali Bose, Dhruv Sehgal, Alankrita Shrivastava and Nupur Asthana.

The series starts streaming on 13 May.