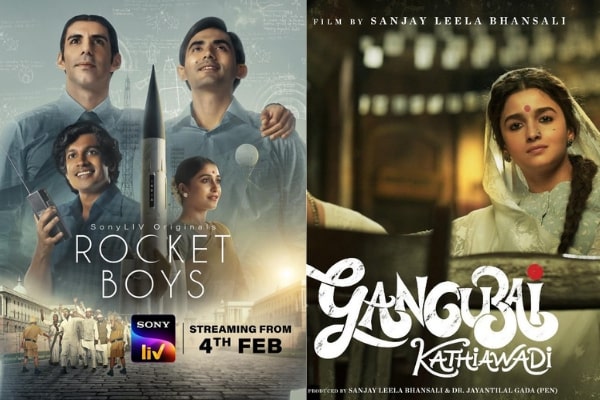 A superb compilation of all the Indian films and shows releasing this February.

What happens when an eccentric detective (Will Arnett) teams up with celebrities Conan O’Brien, Kumail Nanjiani, Annie Murphy, and Sharon Stone? Honestly, they don’t know themselves – because it’s entirely unscripted! Have we caught your attention yet?

This improvisational crime comedy hits your screens on 3 February.

Upcoming comedy adventure One Cut Two Cut stars comedian Danish Sait as an arts and crafts teacher who – get this – must save the school after it has been taken hostage by social media activists. It is one of three movies from PRK Productions and has been dedicated to the late actor-producer Puneeth Rajkumar, who passed away late last year.

In this remake of the 1998 cult classic Run Lola Run, Savi (played by Taapsee Pannu) is in a race against time to save her boyfriend Satya (Tahir Raj Bhasin) after he loses a mobster’s money. The science fiction thriller is directed by Aakash Bhatia and stars Shreya Dhanwanthary, Rajendra Chawla, Dibyendu Bhattacharya in supporting roles.

The film releases worldwide on 4 February.

This biographical series follows the lives of nuclear physicists Vikram Sarabhai and Homi J Bhabha. The roles are essayed by the talented Ishwak Singh and Jim Sarbh respectively as they share the impressive accomplishments and discoveries of these two Indian scientists. Astronomy and science lovers, are you excited for this one?

Helmed by Pratik Gandhi and Richa Chadha, this film is an adaptation of the 2016 novel Six Suspects by retired IFS officer Vikas Swarup. (Fun fact: he also wrote the book that was adapted into Slumdog Millionaire). In this one, detectives Suraj Yadhav and Sudha Bharadwaj investigate the murder of a politician’s playboy son at his own party.

Caught in the monotony of her life, Alisha Khanna (Deepika Padukone) finds herself in a complicated situation when she is visited by her cousin Tia (Ananya Panday) and Tia’s fiance Zain (Siddhant Chaturvedi), with whom she shares a troubled past. Will she be able to confront the skeletons in her closet? You’ll have to watch to find out.

The much awaited Gehraiyaan releases on 11 February.

This upcoming comedy drama is the spiritual sequel to 2018’s Badhaai Ho. Starring Rajkummar Rao and Bhumi Pednedkar as Shardul and Suman, it shares the story of a couple who enter a marriage of convenience, but face complications when Suman’s girlfriend comes to visit.

Badhaai Do releases in cinemas on 11 February.

In this crime thriller, Vikrant Massey and Sanya Malhotra play a young couple being hunted by a ruthless mercenary (Bobby Deol). It’s set against the thrilling backdrop of rural North India and is produced by Red Chillies Entertainment and Drishyam Films.

The film premieres on 18 February.

Veteran Bollywood actor Mithun Chakraborty is all set to make his digital debut in this psychological thriller. He is joined by Shruti Haasan, Arjan Bajwa, and Gauhar Khan. In Bestseller, the lives of two strangers collide, causing a domino effect on the lives on those around them. What happens when every action has multiple consequences?

12 new Indian films to keep you entertained this June