SUNIL GAUTAM looks at election symbols, a plethora of parties, plenty of noise and a whole lot of excuses 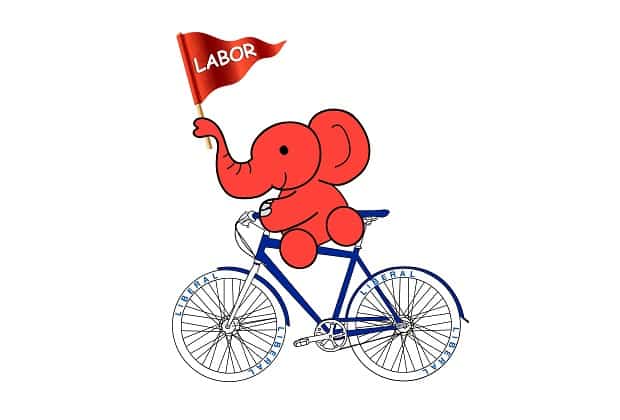 For the last couple of months, Australians have been in the grip of election fever. Policies on the run, promises of financial aid to community organisations, claims to roll back controversial taxes, live debates, aggressive advertising – we are seeing it all.

While the scenario is quite busy and frenzied by local standards, I can’t help comparing it to election time back home. There are a few differences that are too big to ignore. Let me share them with you.

I miss the symbols

Australian politicians have parties with names – Labor, Liberals, Greens, etc. While it is quite understandable, to me it lacks creativity.

Indian politicians are a creative and considerate lot. Taking into account their illiterate voters, they try to make it easy for them to remember which party to vote for. So they go for visual communication. From hand to flower, bicycle to torch, farmer to soldier, elephant to clock – almost every usable symbol has been employed by parties to ensure their ‘mind share’ among the electorate. Such imagery adds colour to campaigns, offers employment to artists and also makes it easy for parties to explain why they fail to deliver on their promises – e.g. the flower was not in season, the bicycle had a flat tyre, the elephant ran away, etc.

In Australia, it is a simple case of one or other. While it does make choosing easier, to me it deprives us of the mental chaos that results from paying attention to 13 different mobs, each promising everything in general and nothing in particular. Processing all that information leads to many a drinking session during which we pretend to decide the future of the country. It gives employment to TV show presenters, generates revenue for media houses and improves voters’ memory. A yet to be done research may reveal that any Indian who has been through five elections has little risk of Alzheimer’s disease. Like all others, this generous gesture by Indian politicians has been largely overlooked.

Where is the noise?

In Australia, we see a few billboards, or the local politician standing alone at train stations handing out flyers or at the most, the task force who politely ambush you as you walk to the polling stations. All this may be nicely understated, but doesn’t quite cut it for me.

Where is the noise? I mean both visual and audio. The blaring loudspeakers that make you wish you could bomb each of them, the giant cut-outs that tower over people at all key landmarks and the rallies that comprise largely of extremely politically aware people who will shout any slogan as long as the rally is followed by a free lunch. Where are these attractions? Noise pollution, waste of tax payers money and traffic disruptions – when all this happens at the same time, you know the country is in the process of choosing a better government.

In Australia, people make a choice between two leaders to take their country forward. They may vote for the local candidate, but they are aware of the final outcome.

I think it is a bit like the ‘spoiler’ in a movie review. In India, we have no real idea of who will be the leader of the country, should your party win. The most important post is kept under wraps until the end. And in the end, the possibilities can range from a foreign born daughter-in-law of the ruling family to her own daughter, or to a retired non-political economist with his best years behind him. In a crisis, we can also have a regional leader who is not known beyond his hometown or someone who ‘should be PM’ because he has been deputy PM for 21 years.

Australians will never know the joy of this suspense.

Where are the excuses?

The differences are not only about the politicians, the voters are poles apart as well. In Australia, people look forward to casting their vote. They want it to count.  A 101 year old woman called a radio station to check how she can cast her vote from home. A man from a small town of 16 people called to enquire about the nearest polling station.

I find this enthusiasm very unsettling.

Back home we listen to all the propaganda, have debates on the pros and cons of various parties and then leave it to truckloads of villagers to decide the future of the country. We blame the calibre of politicians, weather, traffic, time, lack of appropriate sunscreen lotion – everything is fair game as long as we can wriggle out of going out to cast our vote. We convince ourselves that one vote will make no difference and spread this silent vibe to all educated people. The result, easy victories for some and heavy defeats for others. We look at the results and wonder why that ‘good one’ lost the election. Must be someone else’s fault.

I hope there is enough for both countries to borrow from each other. Either the Australians can adopt our over-the-top-yet-shallow approach to campaigning or we clean up our system to make elections a more sober affair.

Or as a wishful aside, we may actually start voting.