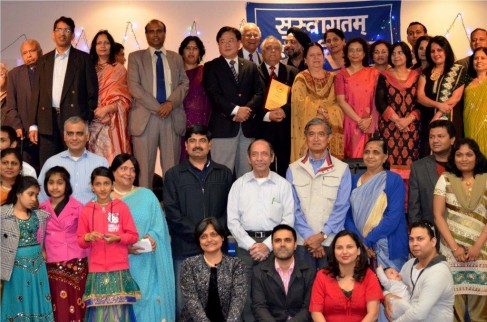 Approaching Clayton Hall to attend the Hindi Niketan Diwali event, strings of colourful lights, quite like the ladis that are commonly found adorning houses in India during festivals, greeted revellers. You could hear the distant hum of people’s conversations, and as soon as I walked in, I was transported back to India.

It was with a feeling of déjà vu that I saw the men huddled together in earnest conversation, women chatting in groups and children running around looking for their mates. The atmosphere was full of colour, joy and vibrancy as the community came together to celebrate.

Hindi Niketan is one of the oldest not-for-profit Indian organisations in Melbourne, formed with an aim to promote Hindi language and celebrate Indian culture.

Hindi Niketan initiated the addition of Hindi language at VCE (Victorian Certificate Of Education) level in Victoria. “We have raised the bar to such an extent, that there are Hindi classes held all over Victoria and many people are now aware of the language,” said Sharad Gupta, President of Hindi Niketan.

Attending the Hindi Niketan Diwali this year was a trip down memory lane. Everyone enjoyed the delightful cultural performances and the delicious food presented with warm Indian hospitality. Following Indian tradition, guests were greeted with laddoos at the entrance, and the evening began with a Lakshmi-Ganesha prayer followed by Kathak performance as a prayer to Goddess Saraswati.

Hindi Niketan is strong on promoting amateur talent, especially youth, as many young children and teenagers presented the entertainment for the night. Culture should not only be celebrated it should be shared and passed on to future generations.

Sharad Gupta also shed light on other activities that Hindi Niketan is involved with during the year. “Each year on Australia Day, which coincides with the Republic Day in India, we organise a family picnic. Apart from celebrating major Indian festivals, we also confer awards to students who have completed their VCE with Hindi as a subject. This is to reward and appreciate their efforts and to promote Hindi as a language.” Besides the cultural and community events Hindi Niketan is also involved in campaigning against social issues like domestic violence and drug abuse.

Inga Peulich, State Member for South Eastern Metropolitan Region and Victorian Cabinet Secretary, attended the Diwali event and had nothing but praise for the organisation.

“I’ve had a very long association with Hindi Niketan,” Peulich said. “I always look forward to their events. Apart from the promotion of Hindi as a language, I admire the optimistic, hard-working and aspirational nature they possess. The sky is a limit for them.”

Hindi Niketan should be commended for their exemplary job at bringing people together and celebrating the culture and traditions of India.