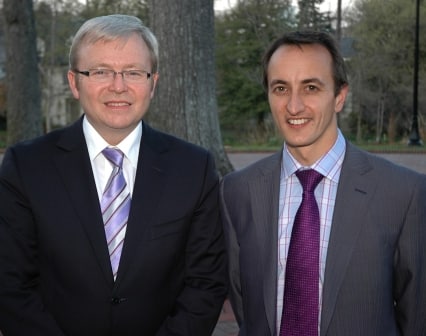 And, no, he is not representing India.

He is unique in more ways than that.

He has recently been designated Australia’s next Ambassador to Israel. Yes, he is a true-blue, dinky-di, ridgy-didge Aussie. And if that means he is half Indian, well, welcome to the new, really, really multicultural Australia.

The world is at his feet and barring a disaster, he should certainly be heading The Australian Department of Foreign Affairs & Trade (DFAT) before he turns 50, surely!?

An extremely rare fact: Dave is probably only the second Australian of Indian descent to represent Australia as an Ambassador.

In case you are curious as to who was the first, I believe it must be Peter Varghese who was Australia’s Ambassador to India between 2009 and 2012, before he was promoted and made the head honcho of Australia’s diplomatic service – the DFAT. He still heads it. Varghese was born in Kenya to Malayali parents and has been one of Australia’s most distinguished and senior civil servants.

Dave Sharma holds a Master of Arts and a Bachelor of Arts from the University of Cambridge and a Master of Arts in International Relations from Deakin University. He is a senior career officer with the DFAT and was most recently Assistant Secretary in the Africa Branch, and previously, Acting First Assistant Secretary, International Division in the Department of Prime Minister and Cabinet.

Sharma’s prior international service includes postings as Counsellor at the Australian Embassy in Washington, Third Secretary at the Australian High Commission in Port Moresby and as Senior Civilian Adviser with the Peace Monitoring Group in Bougainville. Sharma was also an Adviser to Foreign Minister Alexander Downer from 2004 – 2006. His father originally hails from Uttar Pradesh, though they subsequently settled in Trinidad and Tobago, and his mother’s family is from Sydney and Dave grew up in Sydney but remains in close touch with the Indian side of his family.

Sharma will be accompanied to Israel by his wife Rachel and their three young daughters.

Clearly his young age is the first thing that strikes one about Dave. (By comparison, the average age of an Ambassador or High Commissioner that India appoints, is generally in the 50s). But he himself is nonchalant about it.

He says without hesitation, “My appointment proves that Australia is a meritocracy and even the highest positions are available to all comers”.

“The younger generation should certainly look at opportunities in public life and in the public service,” he adds. “Though there are only a handful or so of Australians of Indian origin in the ranks of DFAT, their numbers are certainly growing in the junior ranks”.

Australia has been a strong supporter of the State of Israel since its establishment, and was one of the first countries to grant official recognition and to establish diplomatic relations. The Australian Embassy in Israel opened in 1949.

Australia and Israel enjoy a significant trade relationship worth more than $900 million a year. Australian exports to Israel include coal, meat and aluminium, with imports including gems, manufactured items and telecommunications equipment.

So, it is an important posting, and the Australian Government would have made it after due consideration about the merits of various candidates.

Questions have forever been raised about the influence of the strong Israel lobby within Canberra (and Washington/London), so the new Australian Ambassador may have to walk a tightrope and be prepared to tell his hosts things they do not want to hear on the Palestine problem which has defied a solution for over 60 years.

But in fact, the superior lobbying skills of Israel and the Australian Jewish community has ensured that Israel has had a robust input in the decisions this country has made.

This is something that eludes the Indian community – even though it is four times bigger!