It’s a welcome exercise in cultural sensitivity, tying the turban on to willing members of the public, writes FRANKEY GERARD FERNANDES

At a time when pressures on Australia’s multicultural fabric are threatening to tear it apart, a new initiative has been doing wonders to create a personal connection across difference.

With much discussion in recent days about the burqa and its ill-informed connection with ‘terrorism’, the turban, the preferred headwear of Sikhs, has been used in a new way, winning people over with its message of trust and peace.

In an inspiring new program, members of the mainstream community get an opportunity to have the turban tied around their heads to see what it feels like.

“I feel secure,” says a young Aussie woman who has worn the linen fabric pagri (turban) for the first time.

“There’s a sense of peace,” her male friend agrees.

Smiles abound on the faces of others who are sporting, for a few minutes, the most identifiable symbol of Sikhism the world over.

With one simple act, it is as if a vast cultural divide has been bridged. The turban, it is now known, can be trusted.

Turbans and Trust. That is the name of the new Australian program that has become a textbook case of a cultural sensitivity exercise.

“In these times when misunderstanding and fear dominate our social and political landscape, (the program) is about changing perceptions and creating trust where there may have been fear”. That is the Turbans and Trust message.

“The program evolved out of both a need and an opportunity: a need for non-Sikhs to understand more about the turbans that have been appearing increasingly in Australian streets, and an opportunity to use the simple but profound act of tying a turban to create a connection,” say the Turbans and Trust team.

A not-for-profit developed by Harjit Singh in Brisbane, Jasdeep Singh in Cairns and Daniel Connell in Adelaide, the Turbans and Trust program has been featured at the recent OzAsia Festival in Adelaide to much acclaim, and is now looking at opportunities across the country.

It all started as a germ of an idea with Harjit Singh, a Perth-based tax adviser and National Director of United Sikhs Australia, who has conducted cultural and Sikh awareness training sessions for some years now with the WA police. He wanted to bring his work to the wider public and demystify the turban he has worn all his life, and to reinstate it not only as an identifier of his faith but as an actual mechanism for bringing people together and echo its original spirit.

A core reason a Sikh wears a turban, is to be identified as one who has made a commitment to do good for others.

Daniel Connell, an Adelaide-based artist, is well-known for his large-scale portraits of Sikh men. He has exhibited widely in Australia, as well as in India, and has been featured several times in Indian Link.

Talking to Harjit about Sikhi (Sikhism) in Australia, Daniel made mention of his 2012 work for OzAsia called Turbans and Transport, which addressed the 150-year long history of turbans in the transport industry in Australia, from camels in the old days to taxis today.

“What did you say?’ he said to Daniel. “Turbans and Trust?”

It was no use correcting him, recalls Daniel; Harjit was on another tangent and the idea was born. 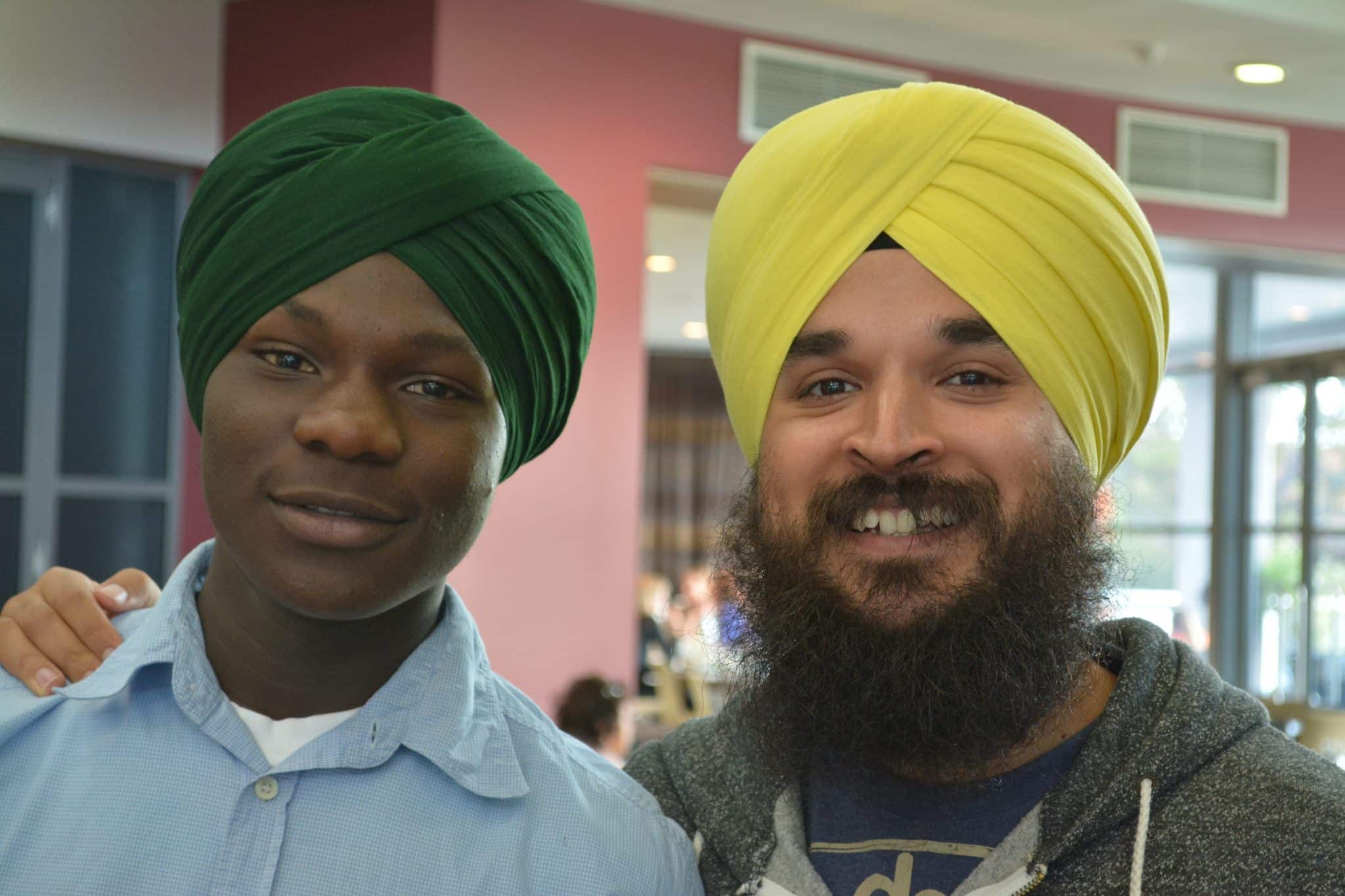 “Every day, turban-wearing Sikhs face a question, a look, a stare, a comment,” says Jasdeep Singh. “And yet, all turban wearing Sikhs would agree that the Tenth Guru gave us Sikhs the turban specifically for this reason, so we would always be noticed and identified. But our Gurus didn’t want us just to be known for the sake of our turbans; rather they wanted us to stand out as persons of integrity; as people who have made a choice to do something good for others.”

Many say this idea of public identification for Sikhs was born in response to the sacrifice of the Ninth Guru of the Sikhs, Guru Tegh Bahadur Ji, who gave his life for the liberation of another community. Sikhi champions the rights of people to flourish according to their own culture and faith. So it’s fitting that the turban is used today not only to identify Sikhs but also spread its stories of compassion, and more importantly to build trust between communities today, especially for the sake of those who are most marginalised and vilified.

And this is exactly what Turbans and Trust does, in a fun and friendly atmosphere.

“We invite non-Sikhs to experience a turban and we tie it on for them,” says Harjit. Even women are welcome to try on the turbans.

And in the tying process, the conversation inevitably ensues about Sikhism and all that it stands for.

Harjit explains, “Inherent in the idea of trust, is risk. To build trust we have to take a risk. The person who wants a turban tied, places their head in the hands of a stranger. The Sikh who is tying the turban, hands over something very precious to a stranger with the expectation that it will be respected, and it is”.

It may seem potentially chaotic to tie turbans on strangers, but the beautiful thing about Turbans and Trust is that it is quite solemn. People respond to the sacredness of the moment.

At the core of it all, Turbans and Trust is a disciplined and thoughtful act that holds to agreed rules and values. Volunteers are trained prior to participating and locations are chosen carefully.

“We take this program wherever there is an atmosphere of genuine openness and new ideas are welcome,” Jasdeep reveals. “We like to reach out to families, and where people can wear a turban but bring it back to us after a while. We steer clear of public places where respectful discussion is not happening”. 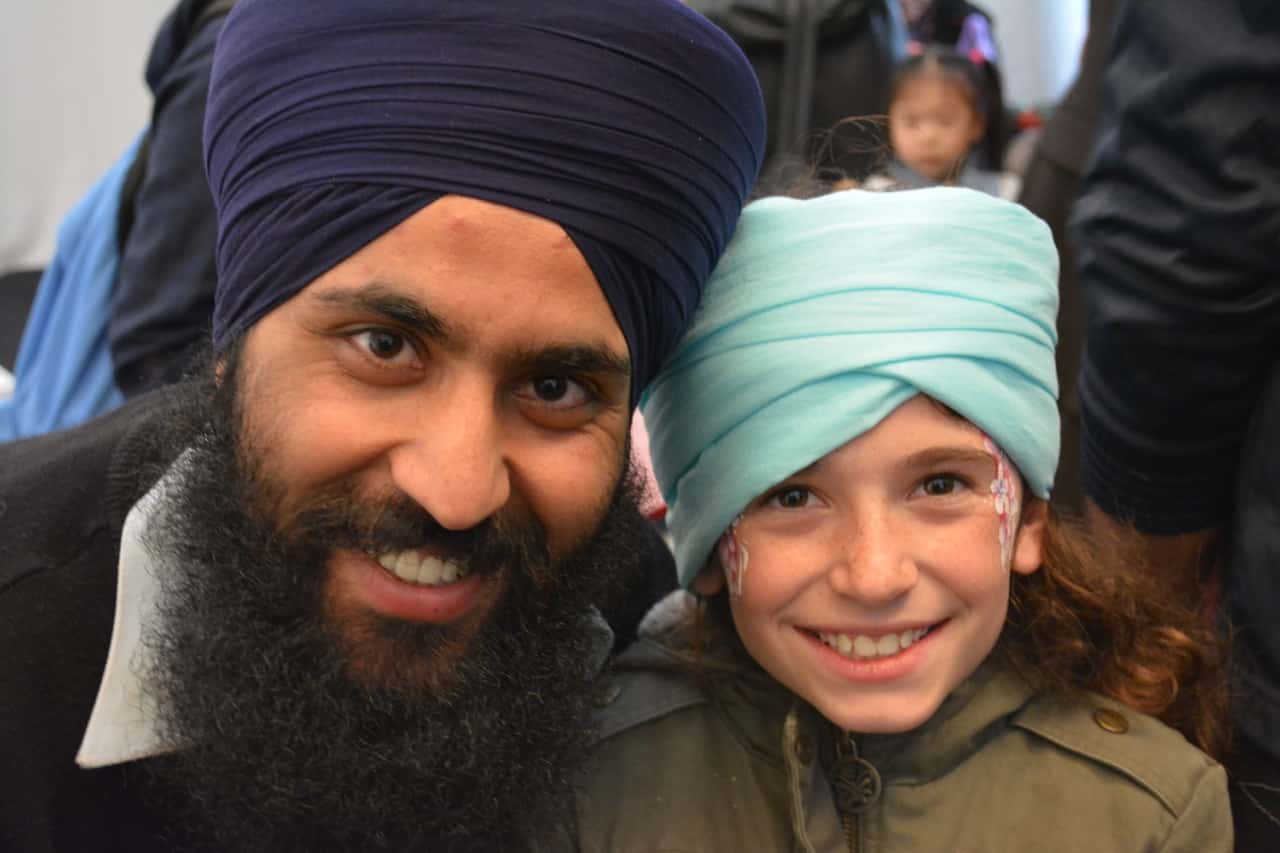 Turbans and Trust focuses on the personal relationship formed during the tying of the turban. A conversation is initiated using an agreed format; Sikh history in Australia, why Sikhs wear turbans and then the conversation will take a natural course.

Never do the Turbans and Trust engineers compare Sikhi to any other religion, faith or community. The religious elements of Sikhi are discussed but not promoted. All conversations are about building positive images of people irrespective of faith, culture and background, in accordance with a Sikh’s duty to uphold the dignity of the human person.

The program has invested in over 400 turbans in various colours which of course are used once only at each activity. Banners, stickers and bold original t-shirts are available on the website to purchase to support more Turbans and Trust events.

A sister organisation is Australian Sikh Heritage, a website resource that is spearheading a campaign to centralise the history of Sikhs in Australia and acknowledge their significant sites.

With a dedicated team that truly spans Australia, the project was launched in 2013. We hope to see Turbans and Trust events being held across the nation and beyond, so the turban, whether we choose to wear one or not, can once again be recognised as a beacon of hope for all.

A cultural feast for Lord Ganesh in Adelaide