Heading across the ditch for some World Cup cricket? Try these hot spots as well 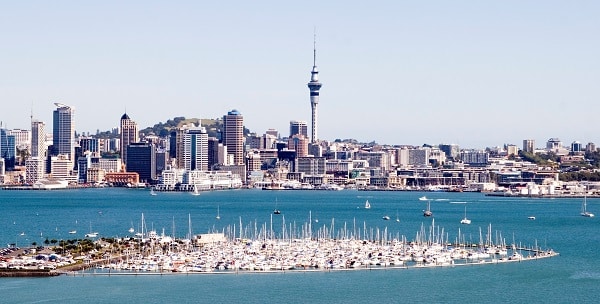 Wedged between two harbours, Waitemata, which spills into Hauraki Gulf on the east coast, and Manukau, opening out to the dramatic black sand beaches of the west coast, Auckland is known as the City of Sails for its stunning harbour dotted with thousands of small recreational boats.
A vibrant and culturally diverse city of 1.4 million inhabitants, 40 per cent were born overseas, with many recent arrivals from India and Asia.
And while the Cricket World Cup may be the latest incentive to travel here, Auckland offers much to discover with its steep streets, friendly neighbourhoods of neat timber houses and boutiques and restaurants that highlight locally-made produce including excellent craft beer and wine.

Highlights
A visit to Auckland isn’t complete without a trek up to at least one of its 53 dormant volcanic peaks. The most popular is Mount Eden, the tallest at 182 metres, with an impressive crater offering 360-degree views over the city and harbours, or One Tree Hill another popular peak. In the city centre, the Sky Tower, at 328 metres, provides panoramic views from the observation deck.

Harbour and beaches
For a glimpse of New Zealand’s stunning scenery, take a 35-minute ferry ride across to Waiheke Island. With its rolling hills, 100 white sand beaches and stunning coastline, it is so visually inspiring that a growing number of artists call it home, while the island also hosts 30 wineries. On the way there you’ll pass by small islands and blue waters teeming with resident pods of whales and dolphins. Bird enthusiasts won’t be disappointed as penguins, terns, shearwaters and petrels are common.

You can also catch a ferry to Devonport on the city’s north shore, renowned for its beaches, quaint timber architecture, boutiques, art galleries and restaurants.
For more seaside wonder, head for the calm white sand beaches facing the Pacific Ocean or the wild, black sand wilderness of the Tasman Sea with pounding waves, brooding skies, dramatic cliffs, high rugged dunes and native bushland. Bethells Beach, the most renowned, is an hour’s drive away.
The heart of downtown Auckland centres on the waterside pedestrian precinct of Viaduct Harbour, home to the America’s Cup operations, as well as to an abundance of restaurants, hotels and bars.
Museums and art galleries
For those who enjoy museums there is no shortage. The outstanding Auckland Museum contains extensive displays on Maori and other Pacific Island cultures. Highlights of the permanent collection include the Maori gallery, which houses the world’s largest collection of Maori ancestral treasures, including stone and wood carvings, weapons and an imposing war canoe built for 100 warriors. The Pacific Pathways exhibit offers an outstanding collection from Tonga, Fiji, Samoa, the Cook Islands, Vanuatu, the Solomon Islands and Papua New Guinea. A Maori group welcomes visitors with traditional songs and dance including the haka, an ancient tongue-poking, skin-slapping dance, traditionally used to prepare a war party for battle.

To sample the best of local cuisine, head for nearby Depot Eatery and Oyster Bar where the accent is on meat produce. One of the most recognisable chefs of New Zealand cuisine, Al Brown’s restaurant excels at offering fish, lamb, duck, clams, veal, pork and fresh-shucked oysters with a few vegetarian options.
On Parnell Road in the elegant inner city suburb of Parnell you’ll find cafes and upscale speciality stores, galleries and antique stores such as Kiwa Art (279 Parnell Road). You can walk there through Auckland Domain, a sprawling park covering 80 hectares through wooded areas and expansive grassy lawns. On weekends you’ll find the Parnell Farmers’ Market with stalls overflowing with local produce including seasonal fresh fruit and vegetables, fresh-baked artisan bread and pastries, fresh cheese and home-made preserves.
My favourite inner city neighbourhood is friendly Ponsonby and the main drag Ponsonby Road which is lined with cafes, bars, galleries and boutiques showcasing talented local designers. Refuel with great coffee at Allpress (266 Ponsonby Road) and for Indian head to Saffron (31 Ponsonby Road).
For funky boutiques head for the edgy thoroughfare known as K-Road, or Karangahape Road, where you’ll find Iko Iko, the shelves lined with treasures, trinkets and Kiwi-kitsch such as windup kiwi birds and kiwi-bird-shaped cookie cutters.

But perhaps Auckland’s greatest drawcard is its people. Unpretentious and friendly, it is the only place where I have ever been greeted by a smiling customs official on arrival, not with an officious gruff look, but with, “Welcome to New Zealand. I wish you an enjoyable stay.”
TRAVEL NOTEBOOK
Getting there: Airlines that fly to Auckland include Qantas, Air New Zealand, Emirates, Jetstar, Virgin Australia and LAN.
Getting around: The Airport is located 21kms from the city centre. Catch the efficient Airbus with frequent departures. The city is well serviced by public transport with three convenient loops for sightseeing. Visit www.at.co.nz or join the hop on hop off bus www.explorerbus.co.nz. To get to Eden Park, home of Auckland cricket, catch a train from Britomart to Kingsland.
Shopping: Great buys include outdoor adventure gear, quality woollens (some a blend of merino and possum fur) and designer clothing.
More information: Visit New Zealand Tourism – www.newzealand.com.au and Auckland Tourism – www.aucklandnz.com