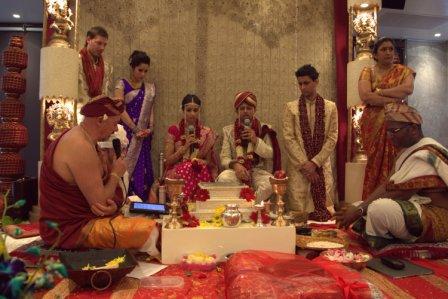 Rituals and mantras have always been the bedrock of Hindu culture for centuries, steadfastly carried forward through generations by the oral tradition. No Hindu wedding is complete without elaborate Vedic rites that go hand in hand with euphoric celebrations.

Of late though, the rapidly turning wheels of modernism have prompted time-poor Gen Y brides and grooms to tailor and abbreviate old-fashioned customs to suit the needs of the day.

Not so Gauri Belapurkar and Chaitanya Cheruvu, who took their vows during a three-hour long ceremony at the Dockside Function Centre in Darling Harbour recently. The wedding, a sumptuous combination of Maharashtrian and Telugu rituals, was solemnised by well-known priests Pandit Ramanujacharya (Ramiji) and Sri Vasudevacharya, assisted by Pandit Andhare, Pandit Trivikram and Pandit Shambhu Petersen.

Witnessed by close friends and family, the newly-weds not only conformed to traditional customs laid down in the ancient texts, but also courageously chose to chant the powerful mantras themselves.

Sanskrit verses are veritable tongue twisters even to the initiated; that two relative novices raised abroad and with no knowledge of either Sanskrit or Devnagiri scripts opted to take on the challenge is truly remarkable.

So, what prompted them to take it on? Simply, a friendly challenge by the head priest!

“During our initial consultations with Pandit Rami, the priest in his typical jovial style casually mentioned that in olden times, the bride and the groom would chant these mantras. ‘So would you be able to do it to make it a true traditional Hindu wedding?’ he quipped. The groom offered to take it on and the bride consented readily without realising the magnitude of the effort,” recalled Vijay Belapurkar, proud father of the bride. “Maybe it was their own intense motivation to do it that way,” he added.

“It all happened in the spur of the moment and we both agreed to this bold venture instantaneously,” explained Gauri.

In addition, the young pair also chose to chant extempore, without any reading aids. “Both of us decided not to read from the book, as it wouldn’t reflect our true sincerity,” Gauri added.

With the help of Pandit Rami, Gauri and Chaitanya set about the task of mastering the shlokas in right earnest. Initial lessons were under the tutelage of his disciple Pt Shambu Petersen. A friend copied the shlokas onto a CD and the couple spent the next three months memorising the texts. Every free moment from their hectic professional schedule was assigned to the task ahead.

Incidentally, Chaitanya is a cardiologist at St Vincent ’s Hospital while Gauri is a financial consultant with leading investment bank, UBS. With the blessings of their parents, the pair was introduced through mutual family friends early last year. Their relationship blossomed, culminating with a grand engagement ceremony during Dussehra.

“Both of us are very spiritual ourselves and perhaps this is what brought us together and enhanced our relationship,” said Gauri. “Professionally our lives are completely different, but religion and spirituality are the common meeting ground. It has made us mentally strong to deal with whatever life throws at us. And I think, we have been able to face ebb and flow of life with greater equanimity.”

Born in India , Gauri and Chaitanya moved to Australia as preschoolers. The groom comes from a conservative Telugu family where strict adherence to rituals is observed, and he regularly attends spiritual discourses on Gita and Vedanta. The bride has also attended Gita discourses conducted by Sri Vasudevacharya more recently.

“I think their traditional upbringing, coupled with the intense desire to master the shlokas no doubt helped them succeed,” noted Vijay Belapurkar.

“As the parents of the bride, we are delighted with the wise selection Gauri has made. Having reared her for over 25 years, any parent would give away their daughter with a heavy heart, but we are glad that she would belong to a very noble family deeply embedded in rich Hindu culture,” he added.

“On completion, when the bride and the groom chanted ‘Om Shanti, Shanti, Shanti’, the entire hall burst into a loud applause and ovation,” recounted aunt Sadhna Belapurkar, who had flown in from India to attend this unique celebration. “In the sound of that ovation was present the blessings of the friends and well wishers as well as sheer admiration. Rami could not hide his elation in his large frame.”

She could not have summed it up better. Inspired by Gauri and Chaitanya’s example, I am sure many more young couples, on the verge of matrimony, would find the task more fulfilling and less daunting.