1. It’s a brave world out there

IFFM 2019’s theme of Courage was explored through the curated films as well as the Short Film Competition. Submissions were accepted from filmmakers from India and Australia in the form of a narrative or documentary.

Ali Mousawi took the coveted prize for his movie My Name Is Mohammad and Raghad, We Don’t Exist Here Anymore, based on a true refugee story. Genevieve Clay received accolades for her film Be My Brother based on a differently abled person.

The two winning entries were played to a packed audience at the IFFM Awards Night held at the Palais Theatre. Director, screenwriter and lyricist Vijay Krishna Acahrya had the unenviable job of shortlisting the entries, choosing from some incredibly talented filmmakers with arresting vision. Admittedly, he presented a rather long section for the Short Film competition on the night, the declared winners receiving a trip to India and a camera from Blackmagic Design.

In a true meeting of East and West the renowned Melbourne Symphony Orchestra tailored their repertoire to play a musical tribute to the cinematic legacy of Indian actor Shah Rukh Khan.

They played a medley of his songs including soundtracks from Kuch Kuch hota Hai, Dilwale Dulhania Le Jayenge, Kal Ho Na Ho and other SRK classics. Their outstanding musicianship was on brilliant display as they accompanied playback singer Amaal Malik for his short appearance on stage. With music well suited to the young singer’s personal style of mixing various genres such as jazz, electronic, Indian classical and pop, the mood turned decidedly serenade with Amaal’s rendition of Mein rahoon ya na rahoon. The best of Indian cinema collaborated with the best in orchestral music and the result was no less than magical.

IFFM’s annual Awards Night recognised some outstanding performances and contributions to Indian cinema. Many glammed up despite freezing temperatures and braved the winds to rub shoulders with some big names in the Indian film industry and celebrate their achievements.

Among the ecstatic recipients on the night were Tabu who took the Best Actress award for Andhadhun, and Sriram Raghavan who won the Best Director for the same film. South Indian actor Vijay Sethupathi collected the Best Actor award for his challenging transsexual role in the LGBTQ genre dark thriller Super Deluxe. 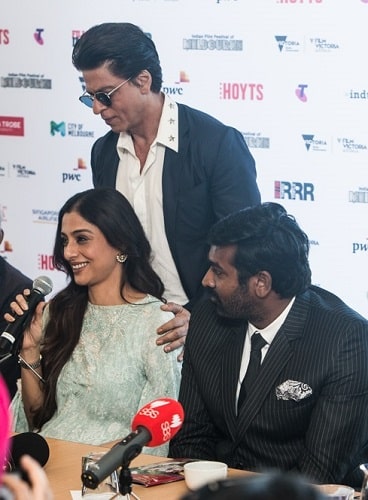 In a combination of escapism and social relevance, education and entertainment, the winning films explored a landscape of feelings and emotions that were deeply human and touched at various levels.

Patriotic sentiments were high at the Flag Hoisting event held at iconic Federation Square prior to India’s Independence Day on 15 August. Film producer and talk show host Karan Johar was given the honour of hoisting this year.

Coinciding with Prime Minister Modi’s highly controversial abrogation of Article 370 from Jammu and Kashmir, the ceremony in Melbourne was preceded by protests and demonstration from the two opposing factions affected by the move.

Entry was free but weather was fierce so it was not as crowded as previous years. However a sizeable number of people from the community did turn up.

Karan Johar said, “This has been an emotional and proud moment for me and hoisting the flag and singing the national anthem with all of you has made my heart feel all the love we have for our great country, India.”

India is not just a country but an emotion, he noted, and he should know, given he has milked the emotion that is India in his hugely successful films.

Dance teams from all over Australia battled it out at Fed Square in the Telstra Bollywood Dance Competition.

Sparking creativity and nurturing dancing talent in various ways, the event attracted solid participation. With focus on teamwork, choreography and discipline many were inspired to connect culturally through the art of dance. 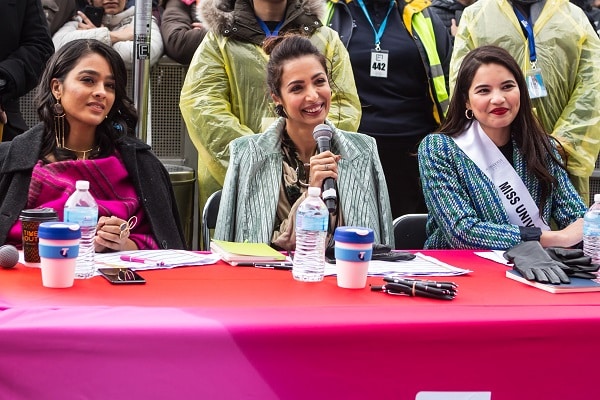 The performances this year integrated diverse styles including Hip Hop, Bhangra, Kathak, classical and contemporary. Short listed entrants in pre-teens, teens and adult category performed, on an open stage in this yearly event.

Chilled to the bone, the contestants bravely got on stage and presented some sizzling routines.

Actor Arjun Kapoor joined in as a surprise guest, happily meting out hugs and selfies to the contestants. Bolly Dance Team Epping, Folk Lovers Academy and Dance Masala were among the winners with a special mention for a group interestingly called Wait till the End.

The chat sessions with journalist Rajeev Masand, entertaining as well as informative, took us to the inside world of the visiting film-makers. Zoya Akhtar, Sriram Raghavan, Thiagarajan Kumararaja and Rima Das spoke about behind-the-scenes happenings and issues of their films Gully Boy, Andhadhun, Super Deluxe and Bulbul Can Sing respectively. As expected though, the most popular was Karan Johar as he spoke about that old favourite Kuch Kuch Hota Hai, in his own words “the most illogical story ever”.

More illogical, we think, was his recount of how the film was made, including roping in SRK with no story whatsoever on the cards, meeting ‘new girl’ Rani Mukherji, and that bizarre wardrobe shopping trip to London that introduced an entire generation to ‘branded’ clothing. We also got better acquainted with his peculiar shoe collection, and Tabu’s unaffected laughter.

Discussion also centred on the serious side of films and their role in society. The Festival shone a spotlight on what is currently most exciting and innovative in Indian cinema with both emerging and established filmmakers coming to showcase their work and engage in a wider discussion about cinema’s important role in the arts.

Great to watch the wider mainstream watching us as we welcomed our film industry amongst us. Every major media platform took on Shah Rukh Khan, quite in awe of the adulation thrown at him. An ABC journalist asked Twitter for possible interview questions; one newspaper apologised for listing his networth as $6m instead of $600m, and many newsrooms cut together clips of SRK songs and films. The general conclusion: initial curiosity turned to, will they admit it, admiration?

With all the major events of the IFFM 2019 behind us there is still plenty of drama left as the Festival continues to roll out 60 movies in 21 languages. The list comprises a broad swathe of movies from classics like Manthan to modern day blockbusters like Badhai Ho, with regional, Indie and short films in between. There’s enough variety in the list to let the unique power of movies wash over us during this exceptionally cold winter.

Thankfully there is an entire year before the next festival rolls around, as no doubt the IFFM team need to recover from the Herculean effort that went into organising this one. The audiences may have had their moment up close with their favourite stars (and memories for a lifetime), but the festival team was probably overwhelmed with the thousand possibilities of things going wrong. Mitu Bhowmick Lange and her team, a large number of them volunteers, have put their heart into ensuring the success of this event: a pat on the back to them.

What can we say, except to quote a social media user: we’re Shah-struck.

Elope at your own risk