Home Arts These Indian-origin artists brought their creativity to Dandenong 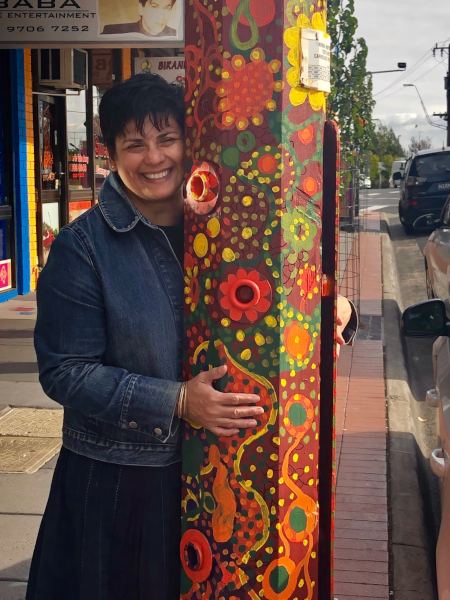 Natasha acknowledges that the pole was once a tree and wishes to reactivate latent energies within it. Her design is linked to the heritage of the Bengali Kantha, and her concept is of a tree in a garden filled with sunshine, care and flowers.

Peace and Love by Sohail Yamin

The brightly coloured motifs, symbols and slogans are inspired by popular truck art in India.

Pillars are a key architectural element and design aesthetic of Indian monuments and structures.

Inspired by indigenous Warli art from Western India which dates back to Neolithic times, the intricate geometric patterns show the relationship of humans with nature, particularly respectful exchange and cultural economic sustainability.

All of the artworks play an important role in the continuation of the City of Greater Dandenong’s ongoing street art program in the Indian Cultural Precinct. The art project was initiated in 2015 with four large scale murals on Mason St, followed by shop front improvements and veranda decorations. Melbourne’s south-east region is home to more than 52,000 people of Indian origin. Approximately 12,400 first generation Indian residents currently call the City of Greater Dandenong home.