The Sikh community is known for its industriousness, perseverance and community spirit just as much as it is for its vibrant Bhangra and for its classic turban-adorned bearded men who stand out from the crowd.

Members of its new generation seem to be living up to the very same ideals, as they strive towards success in their adopted home. A brainchild initiative is the Young Sikh Professionals Network (YSPN), a highly visible networking group that seems to be doing sterling work across the country.

A not-for-profit organisation initiated in 2012, it has successfully brought together like-minded strong-willed youth from advertising, banking, law, consulting and entrepreneurial backgrounds.

YSPN has grown to become a successful organisation empowering and inspiring not just the Sikh community but anyone who is willing to contribute to the broader Australian society.

With a mission of networking and sharing their stories of transformation to other knowledge-thirsty individuals, YSPN operates out of Melbourne, Sydney, Brisbane and Perth with events, seminars, games and leadership connect programs hosted for budding professionals.

At its most recent Perth event held at the Atrium Theatrette on St Georges Terrace, its members heard from an eloquent and inspiring guest, Michael McNulty, head of Deloitte WA and a Board Member of Deloitte, Australia, who spoke about how to succeed in business, describing the milestones in his own story.

McNulty has over 20 years of consulting experience across a broad range of industries but has focussed primarily on mining, oil and gas. He has a passion for encouraging others to grow and flourish, and creates opportunities for this to happen. At Deloitte, he leads the diversity program and is a key participant in all national diversity initiatives.

“You’ll learn how your background can be a competitive advantage and how to leverage it in the diverse modern work place,” he told YSPN attendees.

Sharing anecdotes and experiences from his career journey to becoming what he is today, Michael observed that the key to success is to change and move on to newer arenas when life gets comfortable and complacent.

“I had to move from one sector to the other before settling for mining,” he shared.

Following hardships in his mid-20s, Michael continued to work but was hit by failures while trying to build his consulting practice. When Perth offered no scope, he moved to developing countries and found work in Zambia, Africa. There has been no looking back since. But with a ‘fly in fly out’ career, his lifestyle took a beating, and as a young dad he found he was struggling to find work-life balance.

He set up a consulting practice in Perth with a partner, ensuring the team stuck together in good and turbulent times. “We shared a drink, literally stayed in office, laughed and cried together in the initial months.”

That was the team that fought its way to make the business what it is today.

When asked if the current job freezes and career gaps would change, Michael said that winning and losing are always part of life and he has battled these slowdowns since the 1980s. Every leader knows that failure is guaranteed during the course of a project cycle.

In times like now, there are opportunities for us to scrape, scratch and identify what our true interests are. With multiple qualifications, career titles and job paths in his kitty, Michael is testimony to the fact that one has to be custodian of one’s future.

About the future of WA, McNulty pins his hopes on mining.

“No sector would ever replace mining in terms of volumes and profits,” he noted. “This is an area we are good at, and there’s no point emulating what other states and nations are doing. Mining, oil and gas components are really competitive, though technology and medical sciences are picking up. The future of WA’s economy depends on global economy as well as how efficiently we bring results. It’s important to focus on our strengths first.”

He added, “If you’re looking for IT and technology, WA is not the place.”

When asked to share his views on leadership, McNulty spoke of the importance of being independent, building trust, becoming articulate and creating one’s own unique style. Those who have a strong desire to rise up the career ladder, would only stay ahead. In doing that, errors do happen but asking for help is the key.

It was clearly evident that he had reached out to his young listeners with his words of inspiration, as they aim to succeed in the Australian business fraternity. 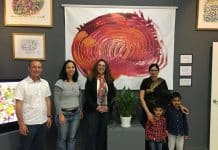