Three series will take place between November 2020 and January 2021. 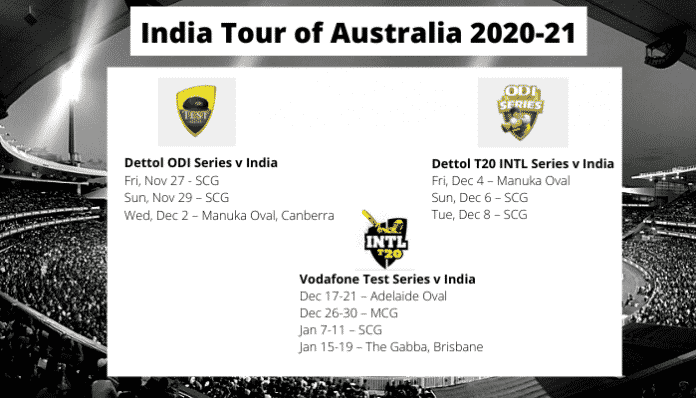 It begins with a three-day ODI series at Sydney Cricket Ground on 27 and 29 November, and Manuka Oval in Canberra on 2 December.

This will be followed by the three-match T20 International Series at Manuka Oval, Canberra on 4 December and Sydney Cricket Ground on 6 and 8 December. While the Australian men’s team is ranked #1 in the world in the ICC’s T20 rankings, India holds a 5-4 win-loss advantage over Australia in its past ten T20I matches.

The Indian team is expected to arrive in Sydney on 12 November, where they will quarantine till their first match of the series.

“Across all three formats, Australia and India represents one of the great rivalries in world sport and we are delighted to welcome Virat Kohli’s outstanding squad to Australian shores this summer,” said Nick Hockley, CA’s interim CEO.

“We have worked closely with the BCCI for many months to bring this tour to life, and I cannot speak more highly of the professional, thorough and collaborative manner with which they have approached this tour in these extraordinary and complex times.”