It seems that modern Asian dancers are straining at the leash of their traditional training in Indian classical dance, wanting something more. Collaborations with choreographers and other artists steeped in contemporary styles provide a convenient pathway for exploration and self-expression.

This was evidenced recently when Seeta Patel, a UK-based dancer with a background in Bharatanatyam, presented her show, Not Today’s Yesterday, at the 2018 Adelaide Fringe. Choreography was by Lina Limosani, an Australian dancer/teacher with worldwide experience who brought her creative influence to the program. 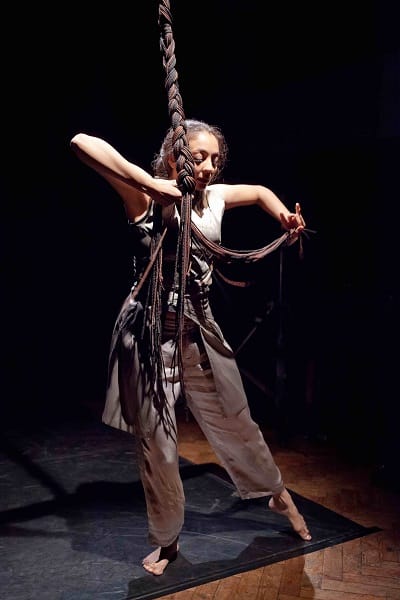 The dance started with back-lighting, showing Seeta in silhouette as she performed robotic movements like a puppet on a string. The effect was much like a shadow dance and this theme of remaining unseen or in darkness for periods continued through the performance.

The storyline of the show appeared to have the socio-political theme of the subjugation of peoples by oppressors who promise ‘…rivers flowing with chocolate’ in a land of dreams. But there is ‘an iron fist in a cotton glove’ to rule the conquered with. What evolved was more of a theatre piece with the story unfolding in movement, dance, music and almost continuous poetic and evocative narration. At one point with the stage in total darkness, the audience was left listening to news broadcasts, and on another occasion to music, for fair periods of time.

Much time was spent with angular pieces of perspex being moved around on the floor. At times appearing to represent invading sailing boats, at others possibly ramparts. One had to wonder at the choreographic effect being portrayed. Similarly, a large woman’s plait was dropped from the ceiling which eventually the dancer continued to finish plaiting, occasionally tapping her feet in the Bharatanatyam rhythm.

Seeta has great stage presence, expressive face and hands, and a lightness to her movements. When given the opportunity to produce flowing action, it was nice to see her effortless display of the art of dance.

Throughout the performance, there was a perspex wall on the stage. Occasionally, Seeta would go behind this, showing the audience a distorted vision of herself, perhaps for artistic effect. But what followed was interesting. She picked up a can of a white paint-like liquid and proceeded painstakingly to pour it along the inside of the perspex wall. All the while, the audience had an obstructed view of her as the liquid made its way to the floor. And then she proceeded to smear it on the wall so she was now completely hidden from view for a fair time. It was a literal representation of the ‘white-washing’ of history, done possibly at the expense of showing the audience the magic of her dancing.

There was narration of a ten-headed serpent and bright jewels that tumbled through the earth and of another land beyond the seas. The accompanying music included what sounded like pastoral music and opera at one stage. The intended lighting scheme had been compromised due to limitations of the venue which, however, was aptly suited for an intimate show such as this.

The finale saw Seeta dressed in a gown made of polythene with a crown on her head, sounding like a dictator giving a rousing speech of blood having to be spilt as a small price to pay for the greater good.

As the flyer said ‘History is passed on from generation to generation. But what if the story is not what it seems?’

Should we hope, or should we despair?

Commonwealth public servants who volunteer will be given extra leaves to...