Matha, Pitha, Guru, Deivam, (mother, father, teacher and God) is the order in which artists venerate their elders. It was clear at Sumukha Jagadeesh’s recent mridangam arrangetram that it was indeed a beautiful amalgamation of efforts from parents, teachers and the divine.

Sumukha was blessed to share the stage in mid-February at UNSW’s Science Theatre with stalwarts in the field of Carnatic music, Sri Kunnakudi M. Balamuralikrishna on vocals, Sri H.N Bhaskar on the violin and Sri Papanasam S. Sethuraman on the kanjira. Sumukha’s sibling Skanda Jagadeesh provided support on the tambura. 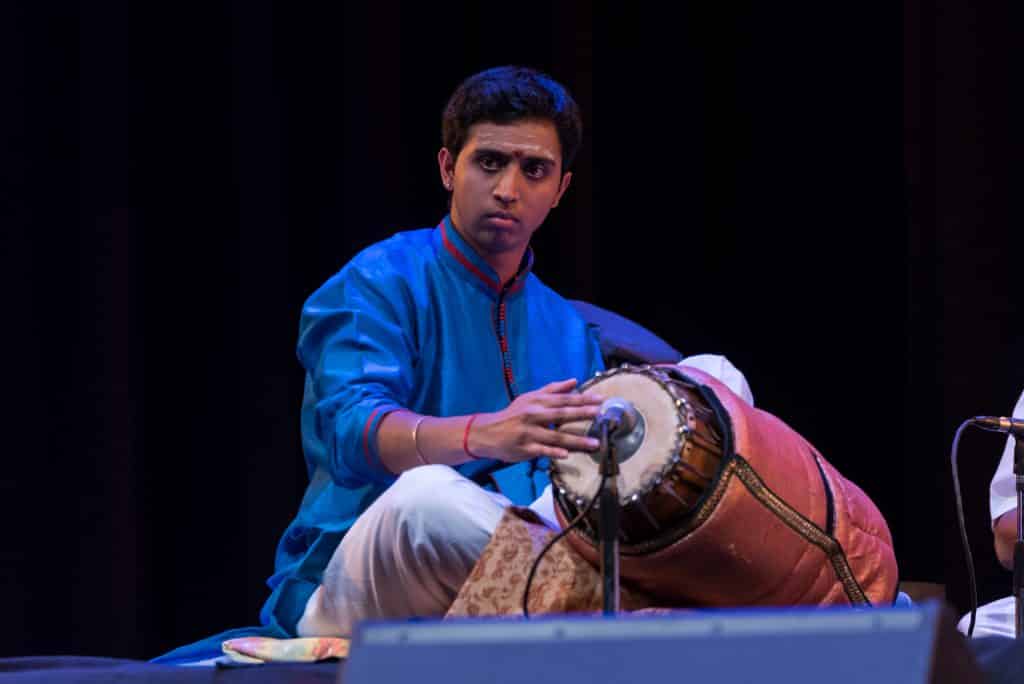 It was also heartwarming to see Sumukha’s guru Sri R. Suthanthiraraj and his mentor Sri Melakaveri K.Balaji in the front row, supporting him with their presence and blessings.

“I clearly remember the first day Sumukha came to class,” reminisces Suthanthiraraj, Sumukha’s teacher in Sydney. “He was so tiny and small made that I could barely see his face when I put the mridangam in front of him.”

The concert began with the evergreen ata thala varnam in Kanada followed by a lively piece on Lord Ganesha, where Sumukha warmed up to the melody and effortlessly manoeuvred the intricacies of the chittaswaram swara patterns and karvais. ‘Harihara puthram’ was next in Ragam Vasantha where the vocalist challenged Sumukha with complex kalpana swarams. A fast paced Venkata ramana followed by a soulful slow-paced Janani ninnu vina enthralled the audience. There was no doubt among those present that day that Sumukha was ready for it all – complex, slow or fast, his accompaniment reflecting intimate knowledge of the songs presented. Experts and patrons of music present in the audience were unanimous in their opinion that the accompanying style had the trademark of the Melakaveri style of playing. This shows the focus and preparation in absorbing the unique style of the Guru and a proud moment for the teacher for having passed on his lineage to a deserving student.

The centrepiece for the evening was Sri Krishnam Bhaje in Ragam Thodi, adi thalam. Sumukha played with flair and confidence and his thani avarthanam (solo segment) embodied the philosophy of the Melakaveri bani in all permutations and combinations.  The ‘Arai Idam Eduppu’ starting with a couple of abiprayams, typical of the Melakkaveri style, finishing to ‘Idam’ was beautifully done. 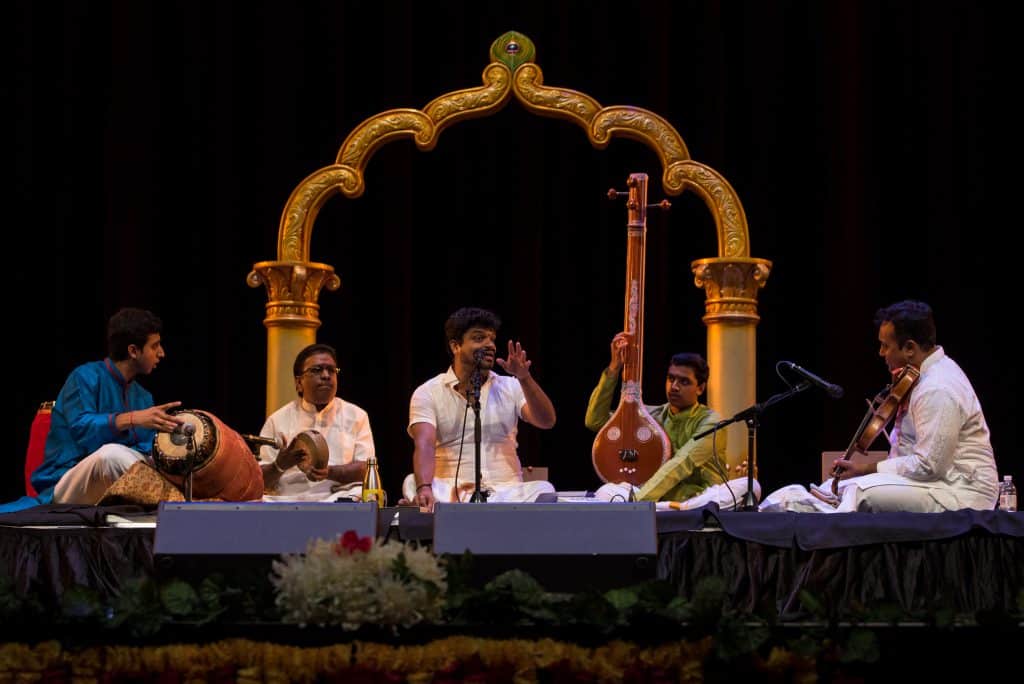 “The effortless transition from chathusram to tiram and kandam were well balanced, which exemplified a level of maturity,” opined Pallavarajan Nagendran, a sought after mridangist in Sydney. “The misra kuraippu and the use of karvais required a lot of laya gnanam, which Sumukha executed well.”

Post interval session brought Sumukha’s aptitude and skill to the forefront with a complex 12 ½ beats per cycle Panchamukhi, Ragam Tanam Pallavi. The beauty of the lyrics, the melody and the rhythm presented by the musicians on stage, Kunnakudi Balamuralikrishna, H.N. Bhaskar, Papanasam Sethuraman and Sumukha Jagadeesh, carved a niche in the hearts of the audience.

‘Namaste sharadhe veena pusthaka dharini’ composed on the Goddess of learning, was a true testament to the learning journey that Sumukha had travelled with his gurus. “A four-and half-hour concert and there was no evidence of tiredness in Sumukha,” aptly surmised Sivakumar Sethupathi, another popular mridangist in Sydney. “Hands and body language were in intense focus and confident accompaniment at the same time from beginning to end. This comes only with dedicated practice from the student and teaching from the gurus.”

Sumukha’s mentor Sri Melakaveri Balaji pointed out that Sumukha’s strength was his hard work and kelvi gnanam (constant listening and exposure to music). Having taught students for more than 35 years and Sumukha for the past 10 years, Sri Balaji feels that he gauges the ability of the student and tailors his teaching to bring out the best in each student. Appreciating the role Sumukha’s parents Meera and Jagadeesh played in facilitating his learning, Sri Balaji stood proud as he blessed Sumukha to evolve into a good vidwan (performing artist) with continued hard work and learning.

The journey has been an arduous one and as Sri Suthanthiraraj, Sumukha’s teacher remarked in his speech, “Sumukha’s parents had to drag him to class in the initial years and as the years passed, it was difficult to drag him away from the mridangam”. So deep was his passion for the art form.

Sumukha says it was a rewarding journey. “Each day was a learning curve and improvements had to be made through constant and consistent practice. The day of the arangetram to me was treated like any other day when practising.”

The arangetram, though many remarked that it seemed more like a professional performance than a debut, transported the audience to a state of bliss.