These are the words that sum up Mark Alvares’s life, who was awarded the Samantha Sophia Ramsey Memorial Award at the Dandenong Civic Centre a few months ago. 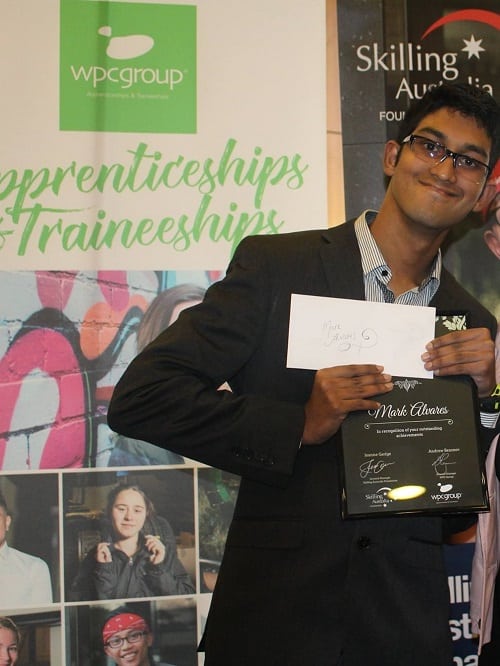 This national award celebrates the achievements of a young person with a disability, recognising outstanding achievements in training, education or employment.

Mark received a one-off $2000.00 grant towards TAFE or RTO fees to further his education and employment opportunities.

Mark was born in UAE and moved to Australia with his mum, dad and older sister in 2006. The Indian-origin family lost their dad in 2014.

Mark’s ADHD had been noticed when he was 3 years old with mild status but a proper diagnosis and treatment plan was made only after he moved to Australia. Within a few years, he was also diagnosed with cerebral palsy.

The diagnosis was a difficult phase for the family as they understood the impact of how difficult and different the journey would be for Mark. Michelle, his older sister, recollects that Mark was too young to understand any of this and was a normal happy child in spite of the fact that he achieved his milestones at a slower pace.

But soon the differences became obvious especially after he was enrolled at a mainstream school. 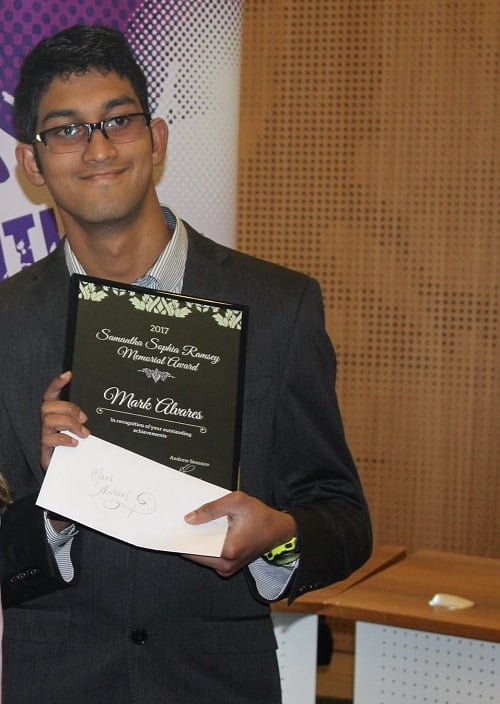 Michelle recalls, “Mark had some trouble coping with others’ teasing and such, but there were some that stood up for him and watched his back. He only lasted about three months in the school – his teacher realised he was different. She assisted the family to find help based on the diagnosis, and also helped with the transition to a much better suited school (Springvale Park SDS).

Mark has learned a lot in Springvale Park SDS, going on to become School Captain in his last year there in 2015.  He is friendly and helpful and cheeky too, which made others happy.”

Mark had been attending the holiday programs provided by Youth Services along with Michelle. His cheerful and pleasing personality made him popular amongst the staff and he also started attending committee programs such as Holiday Leadership and Freeza.

In the Freeza committee, Mark and his team helped organise youth acts on stage for the Dandenong Show 2016, Australia Day 2017 etc, with the support from Dandenong Council.

Winning the Samantha Sophia Ramsay Memorial Award has been a big boost to Mark’s confidence and has helped him continue work towards achieving his goals. The money will also help Mark to gain knowledge in his education in literacy, numeracy, computer and warehouse skills.

Sponsored by the WPC Group, the annual award is in memory of Samantha Sophia Ramsey, the late daughter of Skilling Australia Foundation Director Sophie Ramsey.

Speaking to Indian Link, the spokesperson for WPC Group said “Mark was nominated by a youth program worker at City of Greater Dandenong Youth Services, and was a standout candidate. He has shown exceptional motivation to strive and achieve his goals and that he is committed to an expansive future armed with a plethora of skills and showing no limits to his personal growths.”

The ride has not always been smooth. There have been plenty of challenges along the way as our society is still judgemental when it comes to people with different abilities.

Michelle observes wryly that the biggest challenge they faced has been society itself. “Everywhere we went people would stare and laugh. Recently Mark was dancing at an event and some boys decided to laugh and video him. These boys had an older brother who sang as part of a church group at that event. It is such a shame that some people see such challenged children as an entertainment and this award proves how much more he has achieved.”

Mark was lucky to have some wonderful people who helped him along his path with opportunities: right from the teacher in the mainstream school, to the staff at City of Greater Dandenong Family and Youth Services. These individuals and groups have allowed a young life to blossom and deserve our appreciation.

But it is Mark that should serve as an inspiration to us all: his attitude – give it a go – is one that we could all adopt in our own lives.

Why we need more Indian history at school