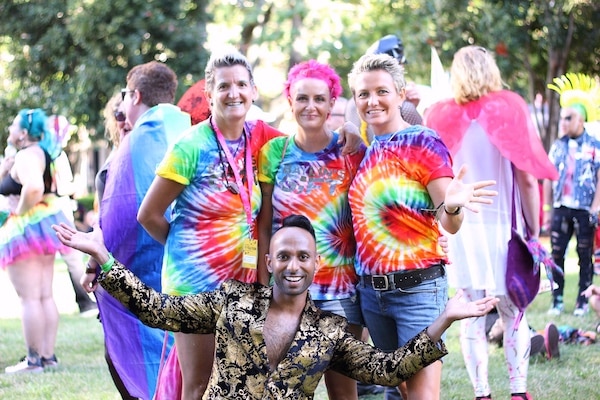 It was about glitter, rainbow colours, make-up, feathers, body paint and superheroes – something that we see at Mardi Gras parade every year. But more importantly, it was about brides with brides, and grooms with grooms, for the first time in Australia with full state sanction. It was, after all, the first Mardi Gras parade after the resounding ‘Yes’ verdict on the same-sex marriage vote last year. 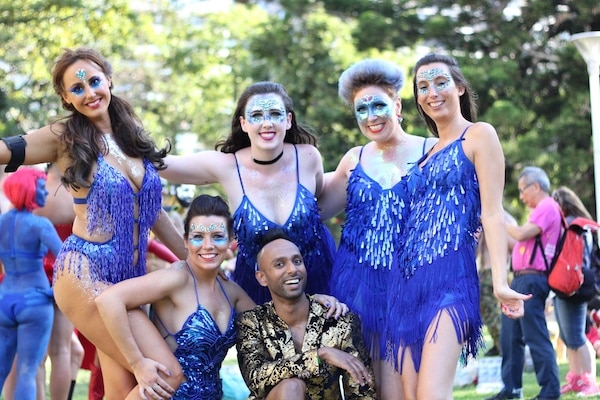 The 40th Sydney Gay and Lesbian Mardi Gras Parade, that took place on 3 March, definitely lived up to the hype (kind of) for me. There were dances and glittery costumes – some a bit too much for daytime public attention especially when there were kids amongst the watchers, but others pleasing to the eye for sure. Most eye-catching were the candy-coloured pink drag divas, and a Qantas float dedicated to American pop sensation and gay icon Cher who made an appearance around 8:30pm at the parade. 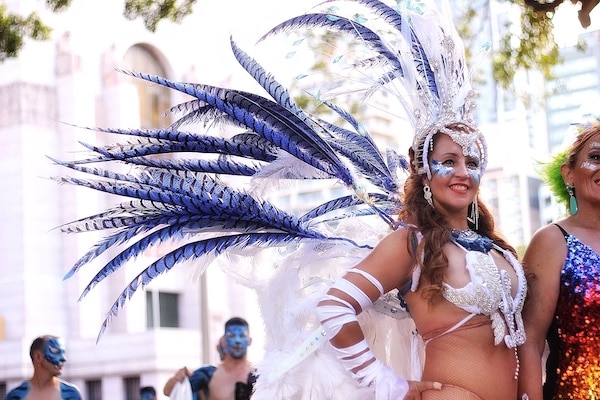 Prime Minister Malcolm Turnbull, with his wife Lucy and New South Wales Premier Gladys Berejiklian, too took part in the parade around the same time. The appearance, which lasted a few minutes, was captured by every camera possible and later ended with a selfie with Cher.

The seemingly innocent selfie caused a social media storm, with users claiming Turnbull placed unwanted pressure on the LGBTQ community with the postal survey, criticising him for his stand on refugees and his apparent support to US President Donald Trump. 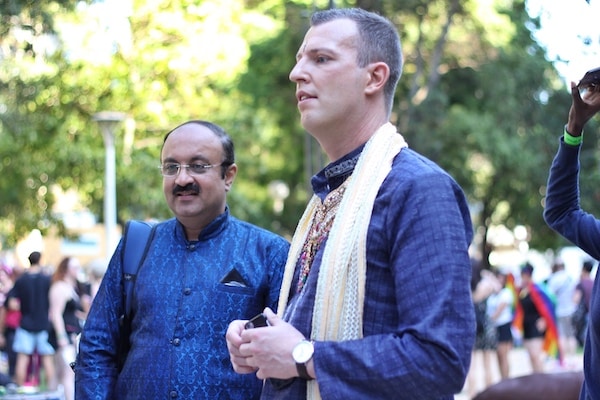 All that notwithstanding, Turnbull said during a broadcast, “It (the parade) was like the nation gave same-sex couples an enormous hug.” “Really?!” said one of my friends and a parade marcher in his Facebook post.

But I digress. This is not about Turnbull. It was about the hundreds and thousands of people who came out to march to celebrate marriage equality. 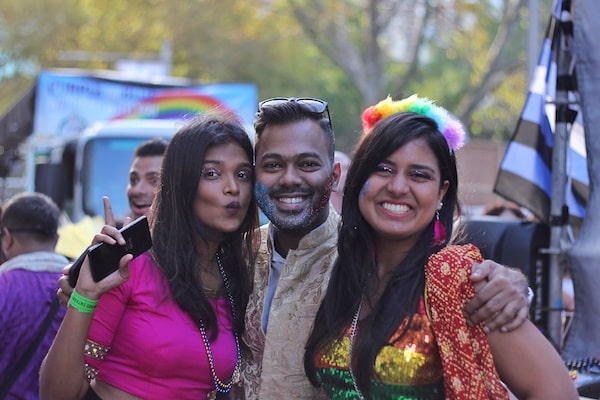 An estimated 150-plus floats appeared at the parade this year, including Netflix which had the stars of Orange Is The New Black, American comedian Lea DeLaria and Australian actress Yael Stone. Dannii Minogue too joined the float and confessed that it was her first parade. But isn’t she too a gay icon? Hmmm, interesting…!

Amongst the floaters was Trikone Australasia, an organisation of South Asian members of the LGBTQ community. The theme of the float was, of course, a big fat Indian gay wedding! 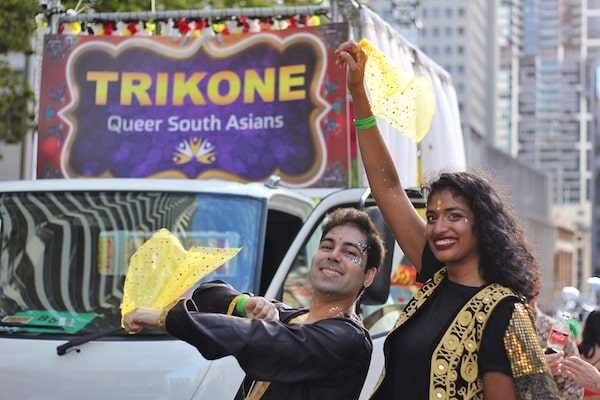 In an exclusive access to the pre-parade ground, I caught up with the Trikone marchers to get to know their level of excitement. The float had colourful Indian costumes for sure, jhoomars, guys in mini ghagras with jhumkas, Bollywood drag queens and pagris! The dancers accompanying the float comprised straight people supporting their LGBTQ friends and family. Everyone was high on the spirit of Mardi Gras and marriage equality. 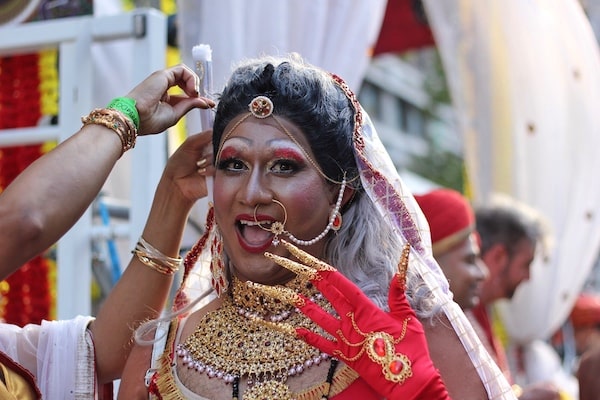 “It’s a happy day,” one of the grooms said while hugging his glittered-up groom for the parade.

Trikone has been a part of the Mardi Gras parade over the years, and this year was yet another milestone for them. The crowd also included marchers from history who had started the protest march 40 years back. 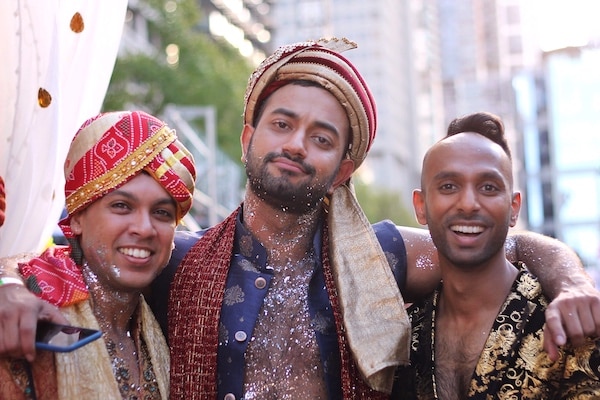 Later Cher, as they say, slayed the after-party which was an instant sell-out three months back. The parade was closed by Samantha Jade at the famous Laneway party held at The Beresford, Surry Hills the next day.

Many, like me, experienced the parade for the first time. The thing I learnt was how to strike a pose. In my own wishful thinking, I almost felt like a huge celebrity in my eye-catching embroidered gold blazer! But there were people who genuinely came for love, although there were some who just wanted to show its wild and extreme version, if you know what I mean. 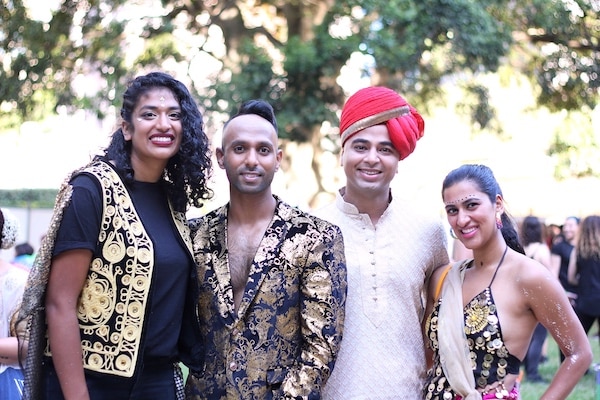 I guess it just proves that with love, celebrations and crazy parties, Sydney’s Mardi Gras is nowhere near slowing down, even at 40!

Kashmir marked ‘disputed’ on Google Maps for people outside India

Working from home: All work and some games with co-workers during...