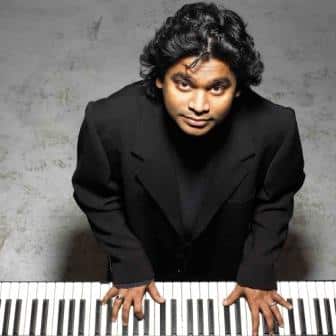 Indian composer A.R. Rahman performed at the 84th Academy Awards in LA  as part of the Oscar band in his third performance at the prestigious award ceremony.
“Oscar sangamam – if you are watching the Oscars live, catch our Oscar superband headed by Hans Zimmer perform tonight,” Rahman posted on his Facebook page for his fans.
He even posted a picture with all members of the band, which performed throughout Sunday night’s ceremony.
Last year Rahman had sung his tracks from 127 Hours at the Oscar ceremony.
In 2009, the 46-year-old performed for the first time at the Oscar stage and in the same year he won two golden statuettes for best original score and best original song (Jai ho) for the movie Slumdog Millionaire.
Other performances at the ceremony also included Esperanza Spalding’s rendition of Louis Armstrong’s “What a wonderful world” as a tribute to the entertainers who died during the past year.
There was also a performance by circus arts and street entertainment group Cirque du Soleil.

While we missed Anil Kapoor and the Bachchans at the Oscars, Reliance Group chairman Anil Ambani was there (minus wife Tina), walking the red carpet with Steven Speilberg. Three films, produced by DreamWorks Studios, Ambani’s co-venture with Steven Speilberg, were nominated for 11 Oscars. Among the 11 nominations, Octavia Spencer fetched the Oscar for best supporting actress for her performance in The Help.

As the only South Asian winner, Pakistani film Saving Face, directed by Daniel Junge and filmmaker Sharmeen Obaid-Chinoy, was honoured with the Oscar award for best documentary (short). It is a film that deals with the issue of women who have had acid throw on their faces as a form of punishment. It is great to see a woman film-maker from South Asia win an Oscar, even though in Pakistan the first-ever Oscar win is seen as ‘both a pride and a shame’ given the subject matter of the film. However, Sharmeen feels, perhaps her film will help address the horrific issue and go some way towards stopping it forever.