There’s an interesting twist in the tale of this all-time favourite, writes PADMANABHAN KARAMIL 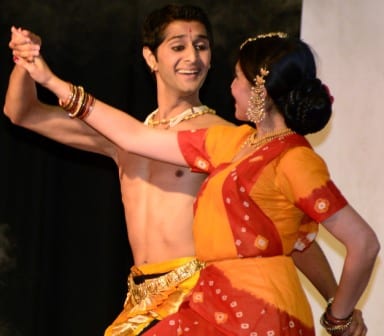 It is a classic fairy tale. A beautiful maiden suffers unjust oppression at the hands of her evil stepmother: her good nature offers her a chance at a better life, and after a slipper-matching finale, the triumphant reward – of the handsome prince – is hers for the taking. Cinderella’s story is one that has stood the test of time. The earliest record of it dates back to the 1st century BC, but even today, it can captivate. This was proven without a doubt at a recent Sydney staging, where it was given a fascinating Indian avatar as Sitarella.

Sydney-based dancer and choreographer Sheila Nair brought this production to life by infusing generous elements of Indian ethos into it, such as glimpses of the Maharaja days, popular Malayalam songs, even a touch of Bollywood. And what did she use in place the proverbial golden slipper? Why, the anklet, of course! The production, a fusion of classical, semi classical and folk styles, was staged at Red Gum Function Centre at Wentworthville

There’s an interesting twist in the tale in this all-time favourite in early March, presented by Sheila Nair Productions, Sydney Malayalee Association and Sydney Malayali Radio. The opening scene took the audience straight to a land of enchantment. A colourful and luscious forest scene projected on the screen set the backdrop as 22 junior artists ranging from 5 to 10 years in age, made their way on stage. Playing gleefully, they stumbled on to a hidden treasure box and found inside it a golden book – telling the story of Sitarella. The show took the shape of book-reading, as Nair’s clear and crisp narration accompanied the dances on stage. Catchy tunes from the most recognisable Hindi and Malayalam films interspersed the narration, as the audience tapped their feet and cheered away! Each dance number was meticulously choreographed to suit the scene of the story. Kids dressed in Kerala mundu set dancing to numbers such as

Arrane Arrane and Chimmi Chimmi from the popular Malayalam movie Urmi had the crowd applauding heartily. The scene depicting the wedding of Sitarella’s father, King Viren was cutting edge in choreography. Portrayed as a flashback scene, it was videoed in black and white to give an impression of a yester-year feel. The song Maa from the movie Taara Zameen Par formed the background music for this scene, bringing tears to some watching the video of a young Sitarella missing her mother Queen Thenmozhi. Sitarella’s maturing from a child to a beautiful young woman, was a clever role change on stage: the young Sitarella (played by Swarna Pillai) gave way to the adultm Siatrella (played by Vidya Gokul) in the exact same costume, at the end of the first act. In the second act, sixteen senior dancers took to the stage, led by Prince Sundarakuttan (played by Govind Pillai). In his Indian avatar, the Prince was a picture of poise and charm. With exuberant energy in his neat jathis and mudras, he took the stage by storm with his rendition of Gopagane from the famous Malayalam movie Bharatham. Vidya Gokul, good-looking, vivacious and graceful, was well cast too, stunning in her beautiful hand gestures and feather-like body movements. Their duets bowled the audience over. Sundarakuttan’s grief was remarkably portrayed by Govind as his brief encounter with Sitarella came to an abrupt end, left as he was with only an anklet to remind him of it. But all’s well that ends well, and soon the stage was filled with dhols the grand finale of the royal wedding of Sitarella and Prince Sundarakuttan. The crowd was in awe as the bride was escorted out in a splendid carriage, reminiscent of a Maharaja’s buggy, designed and crafted locally.

KP Jose, President of Sydney Malayalee Association, welcomed the audience and special guests Arun Kumar Goel (Consul General of India in Sydney) and Loren D’Souza (General Manager of VFS Asia Pacific Region) lit the ceremonial lamp with Sheila Nair. Sheila, a classical dancer herself with more than a decade of international experience up her sleeve, said on the occasion that the production depicted the many facets of dance-drama intricacies. She congratulated her troupe of dancers for their wonderful performance, adding that the younger ones must have gained much from the experience. She presented them with certificates and mementos; they in turn, gave their own memento to their mentor and teacher, fondly called “captain”. The production raised funds in excess of $3,000 along with support from sponsors and advertisers. The sum was presented to George Thomas of the Sydney Malayalee Association and Babu Sebastian of Sydney Malayali Radio to help these two non-profit community organisations in their work.

The fading stories of India’s Partition