Introducing the Kiwi who has visited every state and Union Territory in India. 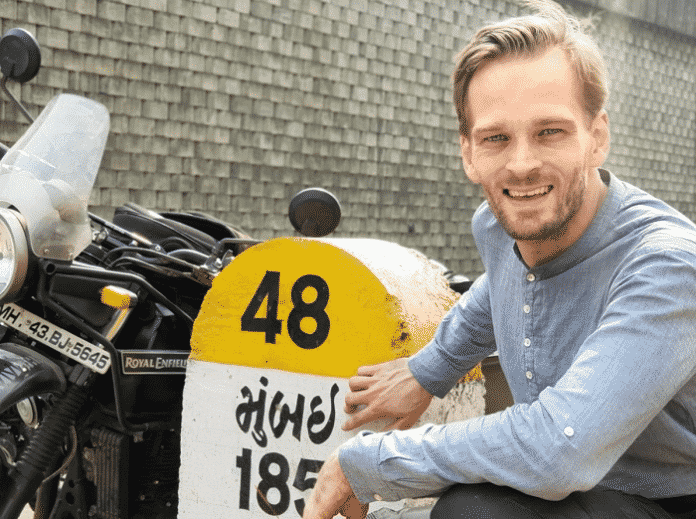 When Karl Rock picks up the phone (with a cheerful ‘Namaste!’ no less), his New Zealand accent is apparent. That is, until he bursts into Hindi with an earnest, quiet confidence.

On social media, the popular Indophile is known for his honest, sometimes humorous, videos where he busts myths and scams of India. He’s even got his own hashtag for the cause: #nahichahiyeji (No thank you).

“There were so many problems when I first came to India. Every tourist has at least one bad experience from their trip. I wanted to give travellers a way to discover the country and avoid the scams,” Karl told Indian Link.

From highlighting fake call centres to warning against fake teas and trinkets, his videos aim to prepare the average tourist for India. It’s no surprise, then, that he’s got over 1.2 million YouTube subscribers.

Now a resident of New Delhi, Karl earned a stamp of approval last year by none other than Chief Minister Arvind Kejriwal when he donated his plasma after recovering from COVID.

“All I have wanted is to fit in. It was such a nice thing to be called a Delhiite. It was one of the best days in a pretty difficult year,” he said with a smile.

You must watch his video about his experience. I am sure this will encourage many more to come forward to donate their plasma and help save lives. @iamkarlrock pic.twitter.com/VySSg0P0yV

The Kiwi’s adventures in India might even put local travellers to shame. Since his first trip back in 2013, he has visited every state and Union Territory, along with neighbouring countries Pakistan and Bangladesh.

His reason is simple: “I’ve been fascinated with India since I was 18 years old. I just wanted to see everything the country had to offer.”

Indeed, a glance at his YouTube channel reveals escapades off the beaten track, like visiting the Bear Temple in Chhattisgarh and Cellular Jail in the Andaman and Nicobar Islands.

Even in his own city, Karl routinely shares snippets of his life. In 2019, he shared his experience of attending a Diljit Dosanjh concert and soon after that, the Punjabi singer reached out on Instagram, welcoming him “to the Bhangra world.”

READ ALSO: I just become myself in Hindi: Ian Woolford

The expat has authored two e-books so far for tourists and Indophiles, including a book on how to learn Hindi quickly. What made him want to learn the language?

“I started learning Hindi to assimilate,” Karl explained to Indian Link. “Often, menus and road instructions and other travel basics aren’t in English. Learning Hindi helps you connect with everyone.”

In fact, some of his most popular videos on social media remain his interactions with locals while speaking in Hindi, complete with their faces lighting up in surprise.

In one instance, he greets a military officer with a jovial ‘Ram ram ji, ki haal chaal?’ (How are you?) before entering the airport.

Another time, an amused shopkeeper asks him: “Toh kahan se seekh rahe ho? (Where are you learning from?)”

Does this mean he’s got a grasp of the infamous Indian head wobble?

“Initially, I had trouble understanding it,” he laughed. “But now people comment on my videos that I do it too!”

Another benefit of learning Hindi has meant enjoying Bollywood movies like a local. In 2018, he even visited the Druk White Lotus School (which was featured in Bollywood film 3 Idiots) before it was closed to tourists.

“I started discovering Bollywood with Shah Rukh Khan movies, but now I’m a massive Aamir Khan fan. His movies have a lot of depth. It can be difficult for foreigners to truly understand movies like PK or 3 Idiots without context, but I’m now getting the hang of it,” Karl shared.

Two years ago, his ties to India were officially cemented when he married his girlfriend, Manisha Malik, by court marriage through the Special Marriages Act. Staying true to his cause, he also made the most of the opportunity to bust myths around marriage in India, including a misconception about converting to Hinduism to marry a Hindu.

“There’s so much strength in the Indian family unit. Sometimes, there can be comments passed about my wife being married to a foreigner, but my parents-in-law really fight for me,” Karl said.

“I didn’t know this before, but when you marry into an Indian family, you become their other son or daughter. I can now say that I have two sets of parents!”

Moving from Auckland to New Delhi, as one can imagine, was a “steep learning curve” for the vlogger. He recalls the initial difficulty of learning to ‘adjust’ by sharing seats on a bus or asserting his spot in line if people try to cut past him.

Over the years, though, he seems to have settled in.

“There’s not all too much I miss about New Zealand… A good mince and cheese pie maybe,” he confessed.

Chole bhature. I love it!

I’m not much of a cook… I can make Maggi, though. I like to add extra black peppers, turmeric, chili to spice it up.

I am the chaiwallah of the house! I love to make proper masala chai, I probably drink multiple cups a day. The funny thing is, I didn’t even like tea before I came to India.

Dangal, starring Aamir Khan. It’s set in Haryana, where my wife is from.

Advice to Aussies or Kiwis looking to live in India?

Live here if you have a deep appreciation of the country. You have to WANT to be here. Otherwise, it can be a lot of work to adapt.