The power of petals 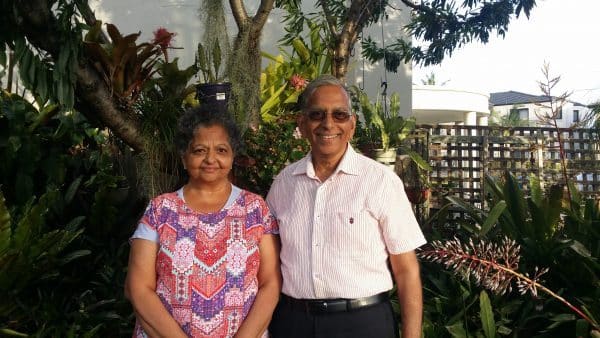 For someone who worked with NSW Lotteries for 24 years, Preeti Vijaya Sawrikar is well aware about chance and probabilities. She decided to play the biggest gamble when she laid her life in the hands of a young doctor who promised his best to try to make her life worth living again. And it paid.

In a way these accompanying pictures of her thriving garden tell the story of Preeti’s spirit to survive. The problem was her degenerated neck. In spite of being on morphine on a daily basis, the pain never subsided and sleep eluded her. Less than six months ago, Preeti thought that life was not worth living anymore. Three major surgeries later, 23 hours in all, these thoughts are well and truly a thing of the past.
She credits the skilful hands of neurosurgeon Dr Rajesh Reddy. The operation could have left Preeti in a coma, a quadriplegic, blind, without speech or dead, but she managed to dodge all these risks by trusting her doctor. He explained the risks but was willing to take the chance that more senior doctors had declined. “The irony is that when Dr Reddy was born, I had just arrived in Australia as a new bride, and went to the hospital to visit his mother, who was a friend. I had no idea that one day my life would be in his hands,” says Preeti wondrously.
Bouncing back to tend her garden after almost a month in hospital, Preeti’s silent wards smile back at her, and at all those who visit the jam-packed garden, in her Concord home. She has lived here since the 1970s with her husband Dr Purushottam Sawrikar. No nook or cranny is spared. Walls, fences, rafters and windows – a plant hangs everywhere.

“It wasn’t like this always,” says Preeti. The spaces were bare while the young couple were busy with their work and raising two children. A bad accident which caused burns to a third of Preeti’s body, left her depressed and it was a wise doctor who advised her to take up gardening.
A neighbour was passionate about bromeliads and so she started with this plant. “One became many and my hobby slowly became a passion, then an obsession,” she laughs, adding “Each mother plant gave babies and my family expanded. They are about a thousand now!” When asked about how she managed to create such a beautiful garden, Preeti says, “I watched every garden show, went to exhibitions, read books and scoured the internet for tips from other gardeners.”
After retiring from full-time work in 2010, this has been her main occupation, often spending three to five hours daily tending her plants.
Here you can see epiphytic plants, tied to fences, a variety of bromeliads, including the massive bromeliad Alcantarea, orchids and succulents. Like a parent proudly extolling the virtues of their child, Preeti speaks about her Alcanterea whose impressive size is matched by its humungously erect flower bloom. “It can take up to 20 years for this bromeliad to bloom and then the mother plant slowly dies,” says Preeti.

Another impressive plant in Preeti’s garden is the Brahma Kamal, a plant sacred to Hindus and revered as the flower of Lord Brahma. This night blooming flower has a delicate fragrance. You are considered very lucky if you see it bloom and Preeti and Purushottam have certainly seen a lot of these flowers.
Preeti loves to share her plants with one and all. There is only one condition imposed – you must love and care for her gift. Preeti says, “When you have brought a plant into your family and they give babies, you don’t have the heart to throw them away when space gets limited. So I am always happy for them to find a new loving home.”
There is no doubt that besides the support of her family, Preeti’s garden has played a big role in her recovery.
“My garden has been my pain management and my therapy,” she says.
She has only the highest praise for Dr Reddy and all the ‘angels’, the nurses and staff at the hospital. The treatment was so good that Preeti’s life is almost normal. Now with the skull, neck and fore bones of her back fused with plates, bridges and screws, Preeti is full of amazing plant ideas.
As I follow Preeti around in her magical garden, I can’t help admiring the feat of modern medicine, the hands of a skilled doctor and the faith of this patient.
“Lots of people have helped me but these plants are such a major part of my recovery,” acknowledges Preeti.


Horticulture therapy
The therapeutic qualities of nature, have been known to man for ages. In the last forty-odd years, research conducted by psychologists has provided scientific evidence as well. In a classic study that perhaps ignited interest in this area, it was found that post-surgery patients in a hospital ward recovered faster, and required less pain medication, if their ward windows opened out to the natural environment, as opposed to built structures.
Gardens influence the physical, cognitive, and psychosocial well-being of individuals. Nature reduces stress and anxiety by screening out competing stimuli in our busy lives. Working with plants and flowers causes us to live in the present moment. It allow us to feel in control, as in controlling beds and borders and weeds, giving us satisfaction.
But there are other recuperative qualities as well. To plant a garden, it is said, is to believe in tomorrow. Gardeners will tell you that to tend a garden inculcates qualities of patience and careful watchfulness; industry and thrift, and very significantly, trust.
And even those of us that are not gardeners, take from gardens, the qualities of serenity, endurance, tolerance, and the notion of peaceful coexistence.
Gardens also bring us in close connect with the end of existence; an acceptance of the life and death cycle, and the solace and upliftment in rebirth or new birth. Indeed “grief gardening” could be a way of coping with trauma and loss. (Check out the work of artist Wendy Whiteley in Wendy’s Secret Garden at Lavender Bay, Sydney).
- Advertisement -
Share
WhatsApp
Facebook
Twitter
Linkedin
Previous articleRang barse…
Next article#BalanceForBetter