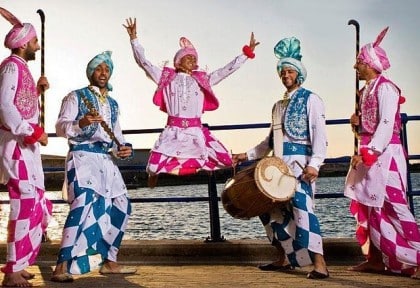 Punjab literally means land of five rivers. The “wow” factor for me personally is Punjab’s rich history of bravery and the resolute spirit of its inhabitants. Situated as the northernmost region to the Indian sub-continent, for centuries Punjab has been the first to bear the brunt of foreign invasions. The Partition of 1947 unleashed untold anguish and torment upon Punjab. However the indomitable nature of Punjabis has allowed them to overcome all hardships and ensured that it is one of the most prosperous and progressive states in India presently. Today Punjabi food, music, dance and culture are famous throughout the world and Punjabis are renowned for their joie de vivre.

Punjab is a state of glory. It derives its name from the presence of five rivers – Jhelum, Beas, Sutlej, Ravi and Chenab. Punjab has produced many war heroes like Bhagat Singh Sukhdev who supported India in gaining and preserving Independence. The glorious Gidha, Jhumar and Bhangra had their genesis in Punjab. The most deep and meaningful poets like Baba Farid, Bulleh Shah, Waris Shah, Shiv Kumar Batalvi and many more were born here. The most important piece of literature for Sikhs is Guru Granth Sahib. Punjabis celebrate cultural and religious festivals like Baisakhi, Teeyan, Lohri, Dussehra. The Green revolution turned Punjab into the wheat basket of India.